The Istanbul stock exchange has been the most profitable investment instrument in Turkey since the beginning of the year, followed by Turkish lira deposits and bonds. 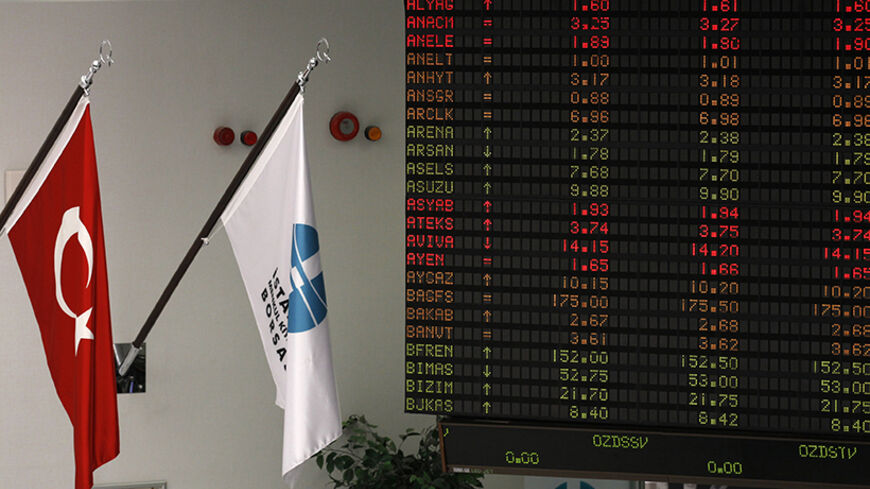 Share prices are seen on a screen at the Istanbul Stock Exchange, Oct. 14, 2011. - REUTERS/Murad Sezer

In the first seven months of the year, Turkish stock market shares outstripped all other investment instruments such as gold, foreign currency and interest in terms of profit. To see how the difference emerged, let’s first take a look at the seven-month performance of investment instruments:

The figures show that those who invested in gold at the beginning of the year made almost no profit, with the gold price rising a negligible less than 1%. Those who bought dollars or euros were in the red — though only slightly — with their exchange rates down 0.04 and 0.12 lira, respectively. Those who converted dollars and euros into lira and put their money in bonds and notes or bank deposits will get yields of around 10% at year-end.

Back in 2012, Central Bank Governor Erdem Basci had said, “Those who invest in Turkish lira will be winners.” The trend in foreign exchange rates proved him right — and not only for 2012. Those who favored the lira profited in 2013 and 2014 as well.

Interest rate yields have turned out the second best profits after the stock market. Yet, if the United States begins to raise interest rates in mid-2015, the lira could slide against the dollar. Continuing growth in the US economy is likely to have a similar effect.

The interest rates on Turkish bonds and bank deposits were slightly above 10% at the beginning of 2014. A 10% tax, however, is applied on the yields, while no such tax applies on stock market profits. The risk at the stock market is big, but the tax-free profits are strongly appealing for large-scale investors in particular.

Why did the stock market yield large profits?

To see how the high profits at the stock market emerged, one should fırst review the past. The Istanbul stock exchange’s main index, BIST 100, hit an all-time high on May 22, 2013, climbing to 93,178 points. The ensuing Gezi Park protests and the December corruption allegations against several ministers ahead of local elections led to a fast slump, with the index closing the year at 67,801 points.

According to Al-Monitor's evaluation, the sharp decline continued in early 2014, with the BIST 100 index dipping to 60,753 points on Jan. 29, its lowest level this year, and shedding a total of some 7,000 points since Jan. 2. But when local and foreign investors saw no impending upheaval in Turkish politics, they moved to take advantage of the fallen prices and turned to buying in February. The rally accelerated in the absence of a government crisis and the ruling party’s victory in the March 30 local elections, which boosted expectations that the presidential elections in August would be trouble free. Despite occasional profit realizations, foreign capital in particular continued to flow in steadily.

Foreign investors, whose sales had amounted to some $494.9 million in January, bought shares worth some $206.9 million in February, turning the tide on the stock market. In March and April, foreign purchases amounted to some $683 million and $437.1 million respectively, rising further to $705.6 million in May to mark the largest monthly purchase this year. Then in June, there was a net foreign sale of $341.4 million. Accordingly, foreign investors closed the first half of the year with net buys of $1.182 billion.

Foreign portfolio up at $65.1 billion

On July 18, the foreign investors’ portfolio at the lucrative Istanbul stock exchange reached $65.1 billion, the largest amount of the past 13 months. Central Bank figures show that foreigners turned again to buying following the June sales. From July 14 to July 18, net foreign buys at the stock market amounted to $396.1 million. In the same period, foreign investors sold treasury bonds worth $87 million. (The treasury bond stock held by foreigners as of July 18 was worth $55.1 billion.) With the latest buys and the increased value of stock market shares, the foreigners’ stock market portfolio rose to $65.1 billion, its highest level in 13 months.

That foreigners sell treasury bonds and buy shares indicates they still expect the stock market to perform well. The rising value of their shares clearly illustrates the stock market’s appeal. The total value of shares held by foreigners, which stood at $62,691,700,000 on July 14, rose to $63,087,800,000 on July 18 with net buys of $391.1 million. The shares’ value being announced as $65.1 billion on July 18 is not a mistake. According to Al-Monitor’s calculation, the $1.3-billion difference stems from the further value the shares gained during the week of July 14-18. The gains clearly show why the Istanbul stock exchange is so appealing to foreigners.

It remains to be seen whether the Istanbul stock exchange’s index will break its May 22, 2013, record of 93,178 points by the end of the year. The presidential elections on Aug. 10 has turned into a vote of confidence for Prime Minister Recep Tayyip Erdogan. The stock market is expected to determine its new path according to the election outcome and the reviews of credit-rating agencies.

A final note: Argentina’s debt default had a negative impact on world markets, including the Turkish stock exchange. Yet, its losses on July 31 and Aug. 1 were limited to about 2,200 points. Accordingly, in the period of Jan. 29-Aug. 1, the index rose from 60,753 to 82,094 points, meaning that the Istanbul stock exchange remains the most profitable investment instrument.