How a US prosecutor is jolting Turkish markets

US prosecutor Preet Bharara’s probe into the dealings of a Turkish-Iranian businessman has both political and financial repercussions in Turkey. 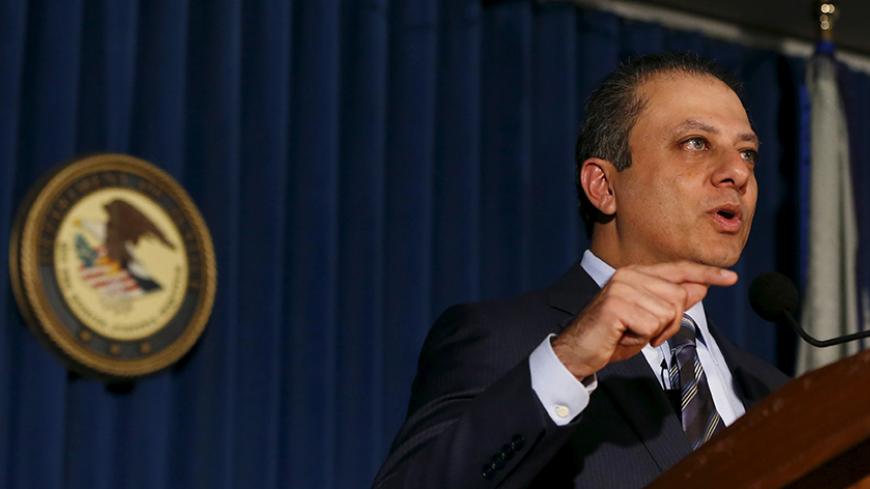 Preet Bharara, US attorney for the Southern District of New York, speaks during a news conference in New York, Nov. 10, 2015. - REUTERS/Shannon Stapleton

Investors in the Turkish financial markets are taking blows from a legal battle across the Atlantic these days as a US prosecutor digs deeper into the dealings of an Iranian-Turkish businessman accused of violating US sanctions against Iran with help from high places in Turkey.

Leading the judicial saga is Preet Bharara, US attorney for the Southern District of New York. Bharara’s indictment against businessman Reza Zarrab, who has been under arrest in the United States since March, has rekindled massive corruption allegations against senior figures in Turkey that the government had managed to suppress two years ago.

The jolts of Bharara’s probe, however, are not just felt in the political realm. The financial markets have their own to worry about as Turkey’s second-largest public lender, Halkbank, stands at the heart of the probe. Zarrab allegedly bribed Halkbank managers to process transactions and advance his gold trade scheme to evade sanctions against Iran.

Halkbank shares have lost 16% of their value since March 22, when the news of Zarrab’s arrest in Miami reached Turkey. On March 22 alone, the shares plunged 5%, followed by another dive of nearly 3% on May 26, after Bharara appealed to the US court for denial of Zarrab's bail request, citing corruption allegations in Turkey.

Analysts say the US probe has placed Halkbank under a cloud of uncertainty, with the fallout affecting the entire stock exchange.

Sadrettin Bagci, an analyst at Deniz Investment, expects Halkbank shares to remain volatile throughout the judicial proceedings in the United States. “The investor sentiment has turned sour because of this legal process. As long as it goes on, the uncertainty over Halkbank shares will continue,” Bagci told Al-Monitor. “Halkbank weighs about 7 or 8% on the index, which means a significant impact on the stock exchange as a whole.”

The flight from Halkbank shares affects other state banks as well. “The sentiment toward other public banks is similarly souring because of Halkbank. Hence, VakifBank shares are falling, too,” Bagci said.

Vedat Mizrahi, research director at the investment firm Unlu & Co., shares a similar view on the spillover effect of plunging Halkbank shares, but believes it will be a limited one. “I don’t think that the story with Halkbank in particular is creating a systematic risk for the market in general,” Mizrahi told Al-Monitor. “There is still vagueness. It is Halkbank’s former CEO who faces accusations. The bank’s institutional entity is not part of the probe.”

That’s the most critical question for the markets: Will the investigation be limited to the bank’s former CEO or extend to the bank as an institution?

In a statement following Zarrab’s arrest, Halkbank claimed it was not part of the probe and had nothing to do with the controversy. “All our transactions are in line with national and international rules,” the statement said. “There is no demand for inquiry targeting our bank, and our bank is not part of any inquiry or investigation.”

Halkbank CEO Suleyman Aslan was detained during the corruption probes that shook Turkey in December 2013, after $4.5 million stashed in shoe boxes was discovered in his home. Four ministers were also implicated in the scandal, which involved graft allegations in a number of other areas. Aslan resigned in February 2014, and the charges against him and dozens of other suspects were later dropped.

Bharara’s accusations against Zarrab are very similar to what his Turkish colleagues had claimed before their investigation was quickly thwarted. The shoe boxes were said to contain the kickbacks Aslan received from Zarrab, who allegedly bribed his way through the Turkish government and bureaucracy to keep the gold scheme going. Similarly, Bharara now says Aslan took at least $1.4 million and 2.5 million euros ($2.8 million) in bribes from Zarrab to help him evade the sanctions. Those were in fact the accusations that led to Zarrab’s arrest in Miami in March. Most recently, Bharara’s office asked a federal court to deny bail to Zarrab, given the gravity of the charges he faces.

Since Dec. 17, 2013, when Aslan was detained in Turkey as a central figure in this web of bribery and smuggling, Halkbank shares have plunged a staggering 42% to become the worst-performing banking shares on the market. The overall index of the Istanbul stock exchange rose by 7% in this period, while the banking index went down by 4%, reflecting the strong sell-off pressure on Halkbank shares.

Up until the graft probe, Halkbank was nothing but a success story for the ruling Justice and Development Party (AKP). Like other state-owned banks, it was restructured in the early 2000s and put on a course of strong, profitable growth after years of financial turmoil in the 1990s when bad loans and mismanagement at public banks dragged the Turkish economy from crisis to crisis. Founded in 1938, Halkbank’s assets amount to 190 billion Turkish liras ($64.7 billion) today, which makes it Turkey’s sixth-largest lender in terms of assets.

The news of Halkbank’s involvement in the US probe coincided with a political shake-up in Ankara as Erdogan forced Prime Minister Ahmet Davutoglu to step down, adding to the worries of foreign investors. Amid uncertainty over the new Cabinet, foreign investors in Turkey sold shares worth $646 million in May.

Political fallout on the Turkish banking sector has become more and more frequent in recent years. Following the 2013 corruption scandal, the government seized Bank Asya, an Islamic lender linked to the Gulen movement, which faced a massive clampdown for allegedly orchestrating the graft probes in a bid to topple the AKP. Turkey’s largest private bank, Isbank, meanwhile, has increasingly come in AKP crosshairs amid political spats over its shareholder structure — a legacy of Mustafa Kemal Ataturk, the founder of both the bank and the secular Turkish republic.

In remarks to Al-Monitor, Atilla Yesilada of GlobalSource Partners, a business consultancy working with foreign investors, warned that such controversies were taking a serious financial toll. “Long-term and quality foreign investors are no longer coming to Turkey due the increasing erosion of law and institutions and the banking sector’s central place in political conflicts,” he said. “Apart from the 'hot money' seeking short-term interest gains, the desired quality investment will never come if this situation continues.”