While Congress has bipartisan support for sanctions against Turkey, the State Department is pushing back, demanding that newly established consultative mechanisms to normalize relations between the NATO allies be given time. 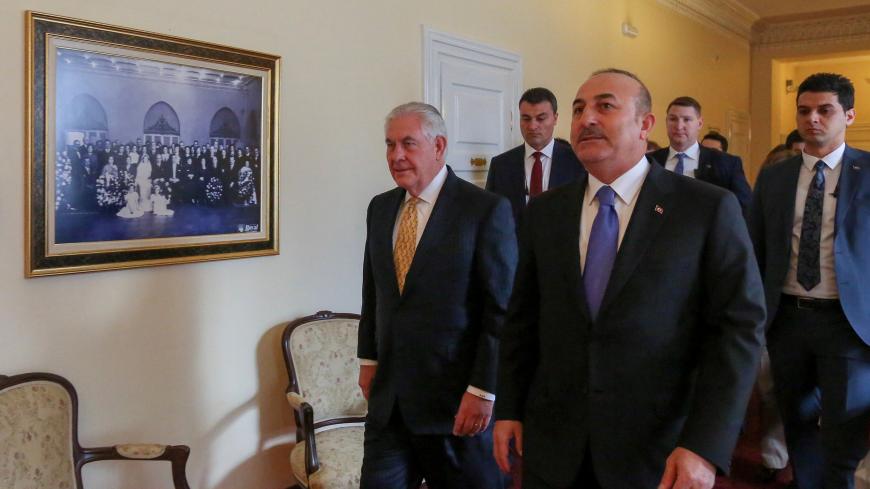 As the US Congress continues to weigh potential sanctions against Turkey over its unremittingly hostile stance toward the United States, there is growing debate within the policy community about the merits of such action, with some arguing it could bow Turkey into submission and others insisting it will make the problem even worse.

Fury at what Washington calls the unlawful detention of US consular staff and US citizens, in particular that of North Carolina pastor Andrew Brunson since October 2016 on unsubstantiated terror charges, has spurred bipartisan support for sanctions against Turkey. These include targeted visa bans on Turkish government officials thought to be responsible for the detentions. Another option being mulled is to ban imports of Turkish manufactured handguns, which pull in an estimated $100 million in annual revenue for Turkey, sources familiar with the deliberations told Al-Monitor.

The volley of anti-American rhetoric pumped out by Turkish leaders, notably President Recep Tayyip Erdogan, including threats to attack areas in northern Syria where US special operations forces are deployed, has further sharpened the congressional appetite to punish Turkey. And Turkey’s ever-nebulous deal to purchase Russian S-400 missile batteries has bolstered the US legislators' case.

But administration sources speaking on condition of anonymity told Al-Monitor that the State Department’s Bureau of European and Eurasian Affairs, whose brief includes Turkey, is pushing back, demanding that newly established consultative mechanisms to normalize relations between the NATO allies be given time. The sources said Secretary of State Rex Tillerson, who met for more than three hours earlier this month with Erdogan in Ankara, where the mechanisms were announced, favors cooptation over confrontation as well.

They say Turkey has moderated its tone since Tillerson's visit.

Those favoring a tougher approach point to Russia’s use of sanctions to force an apology after Turkey shot down a Russian fighter jet in 2015. More recently, Germany’s threats to cut funding to Turkey from its state-owned bank and other European banking entities and curb military sales appear to have secured Turkish-German journalist Deniz Yucel’s release. An informed source familiar with administration policy told Al-Monitor, “We keep thinking a little assuaging will make it better. … An appease approach just makes it worse and worse.”

But Nicholas Danforth, a senior policy analyst for the Bipartisan Policy Center’s national security program, warned in a brief, “Unlike Russia … the United States continues to benefit from its uneasy status as Turkey’s ally, using military facilities on Turkish territory that Ankara could close if both sides decided to play hardball. At the very least, preparing for this should be a prerequisite for any sanctions policy.” These include Incirlik Air Base, which has long served as the Pentagon’s main logistical hub for operations in Afghanistan and Iraq and more recently for coalition missions in Syria.

Danforth told Al-Monitor, “I think the assumption that because playing hardball worked for Russia, it will work just as well for the United States is problematic. No one played hardball better than Stalin, and when he used that approach after World War II, it ultimately led to Turkey’s decadeslong membership in an anti-Russian military alliance [NATO] and US air bases on his border."

Howard Eissenstat, a senior fellow at the Project on Middle East Democracy who closely follows Turkey, agrees that Washington’s relations with Ankara need to be handled carefully. He told Al-Monitor, “At the core, Erdogan believes the US wants to overturn him, which means he is likely to see sanctions in that light. Moreover, Turkey is far less dependent on the US than it is on Germany and the European Union.”

Eissenstat argued what is needed is not sanctions over strategic differences, such as the S-400 deal and Afrin, or over Turkish human rights abuses per se, but rather public references to those abuses during every public meeting between US and Turkish leaders. He said that above all, what is needed is "a top-down re-evaluation of US interests in Turkey.” The relationship is weak "because the two countries don’t actually have many shared interests.” Nonetheless, “There is still value for both countries in maintaining relations if they can, but to do so requires a realistic assessment of where those shared interests actually are and what they are worth to both parties.”

The source familiar with the administration's thinking argued that some in the State Department’s Bureau of European and Eurasian Affairs “believe the relationship is so bad they don’t want to touch any of their [bilateral issues] so they always point to Syria as a place to deal." Washington has yet to nominate an ambassador to Ankara to replace John Bass, who left Turkey in October to become ambassador to Afghanistan. Bass, while highly lauded by many US officials, had become a bete noire by the end of his tenure in Turkey.

One of the new consultative groups that Tillerson introduced while he was in Turkey is to discuss Syria, where the US alliance with Syrian Kurdish People’s Protection Units (YPG), viewed as terrorists by Turkey, continues to poison ties. The consultative group is due to meet in Washington on March 8. Some media reports suggest that one of the proposals to calm Turkish ire is to diminish the YPG’s role in the Syrian Democratic Forces (SDF), the umbrella group that includes thousands of Arab fighters and is the coalition’s top partner in the fight against the Islamic State (IS). But that will be a hard sell.

For as long as the battle against IS continues, any sidelining of the YPG is unlikely because the group provides by far the most effective and disciplined fighters in the SDF. The US Central Command commander, Army Gen. Joseph Votel, acknowledged as much in testimony before the Senate Armed Services Committee on Tuesday when he said that Turkey’s ongoing military offensive against the YPG in Afrin “increased risk to our campaign to defeat IS." Votel said, “Many fighters in the SDF have familiar ties to Kurds in Afrin, and they are now forced to choose between completing operations against IS fighters in the [Middle Euphrates River Valley] and assisting their fellow Kurds in northern Syria.”

A separate committee on judicial affairs to handle the case of Fethullah Gulen, the Pennsylvania-based Turkish cleric who is accused of masterminding the failed attempt to violently overthrow Erdogan in July 2016, is also due to convene, Turkey’s state-run Anadolu News Agency reported. The case of Brunson and those of the two US consular employees, both Turkish citizens, respectively accused of links to Gulen and the outlawed Kurdistan Workers Party (PKK), would presumably be part of those talks.

Turkey is demanding Gulen’s extradition, but US officials say Turkish authorities have failed to produce what they call “a smoking gun.” There is speculation that Brunson is being held as some kind of bargaining chip. Erdogan helped feed this when he told policy academy graduates in September, “'Give us the pastor back,' they say. You have one pastor as well. Give him [Gulen] to us. Then we will try him [Brunson] and give him to you.”

Eissenstat argued that if sanctions are imposed, it should be for Turkey’s targeting of US citizens and Turkish nationals working for US missions in Turkey. “I supported the downgrading of consular services when it was first imposed,” he said, referring to the decision to suspend visa services for Turkish citizens following the arrest of Metin Topuz, a local employee at the US Consulate in Istanbul. The ban was rescinded in December on the grounds that Turkey had pledged to take no further action against US citizens and mission employees without informing Washington first. Eissenstat said, "I was baffled by the US decision to draw back from it [the visa ban] without its basic demands [the release of US mission personnel] being met.”

Not only that, it emerged that Turkish authorities had placed a third US consular employee under house arrest last month over his alleged ties to Gulen. The Turkish media reported that an electronic ankle cuff had been placed on the employee. When questioned about his status, State Department spokesperson Heather Nauert said she was “aware" of the reports but declined to comment further.