A draft spending bill has dropped proposed Turkey sanctions meant to target Turkey's detention of Americans and US consulate staff amid US efforts to ease tensions with Ankara. 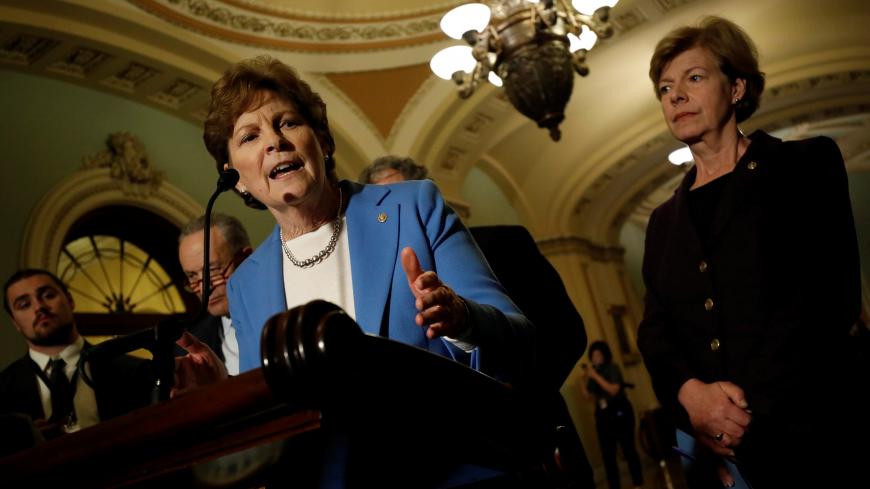 Proposed language on Turkey sanctions in defense of what Congressional lawmakers call US hostages was dropped from a draft $1.3 trillion federal spending bill that was released to the public yesterday.

The move comes amid a concerted push by the State Department to assuage Turkey, a critical NATO ally, over the United States’ continued support for Syrian Kurdish militants labelled terrorists by Ankara. The State Department’s Bureau of European and Eurasian Affairs, which handles relations with Turkey, is believed to have played a major part in persuading Congress to shelve proposed sanctions against Turkish officials deemed to have been responsible for what the Donald Trump administration terms the unlawful detention of US nationals and Turkish citizens employed by the US consulates in Istanbul and Adana.

Sen. Jeanne Shaheen, D-N.H., who together with Sen. James Paul Lankford, R-Okla., co-sponsored the sanctions language, confirmed to Al-Monitor that it had been pulled to allow more time for diplomacy to work. Shaheen said in an email: “The safety and security of US hostages held in Turkey is a bipartisan concern and priority for Congress. This is why, upon further discussion with those involved in diplomatic negotiations, Senator Lankford and I have agreed to give the State Department’s newly established dialogue with Turkey more time to succeed.”

Shaheen was referring to a consultative mechanism announced by outgoing Secretary of State Rex Tillerson following talks in Ankara with Turkish President Recep Tayyip Erdogan and Foreign Minister Mevlut Cavusoglu. The dialogue is multi-pronged, with differences on Syria and the status of imprisoned Americans and consulate staff as well as that of Fethullah Gulen, the Pennsylvania-based Sunni cleric Turkey wants extradited over his alleged masterminding of the July 2016 coup, dominating the agenda.

The senator added, however, “[W]e have made it clear to both the Government of Turkey and to US officials that if no improvements are made to the conditions of the Americans held unlawfully in Turkey, we will prepare even stronger sanctions against those involved in the arrest and detention of innocent Americans like Pastor [Andrew] Brunson and others.”

The plight of the North Carolina minister, who was arrested in October 2016 on a cocktail of terror charges including links to the Gulen network and involvement in the coup, has especially aroused bipartisan fury and calls for sanctions.

The language that was removed from the omnibus, which was seen by Al-Monitor, included among its provisions, “The Secretary of State shall deny entry into the United States to any senior official of the Government of Turkey about whom the Secretary has credible information is knowingly responsible for the wrongful or unlawful prolonged detention of the citizens or nationals of the United States.” The provision contains caveats such as allowing the secretary to waive the sanctions should he determine “that the waiver would serve a United States national interest or that the circumstances which caused the individual to be denied entry have changed sufficiently.”

Nate Schenkkan is the project director for Nations in Transit at Freedom House. He told Al-Monitor Turkey should not be lulled into complacency. The debate on sanctions shows “how strong the consensus is on the Hill to take action over the unwarranted detention of Americans. Even reaching the point of serious discussion of sanctions on Turkish officials is a big first step given the depth of the relationship.” Schenkkan further cautioned, “This omnibus is a stopgap bill and Congress will have a chance to put sanctions into the next funding bill within just a few months. If Turkey doesn’t take action to resolve this issue, they can expect sanctions to come up again very shortly.”

The decision to withhold the sanctions language presumably rests on the hope that Brunson will be allowed to leave the country after an initial court hearing, much in the same way a German-Turkish journalist who was held for for a year on similarly specious terror charges was last month. Critics say Brunson and others are being held as bargaining chips to secure Turkish interests though thinly disguised "hostage diplomacy." The American Center for Law and Justice, a conservative group that has taken up Brunson’s cause, predicted that a hearing could take place as early as April 16.

Prosecutors in the Aegean port city of Izmir, where Brunson is being held, finally indicted him this week. The charges being leveled against the native of Black Mountain include seeking to convert muslim Kurds to Christianity and a web of subversive liaisons with former CIA and Pentagon operatives, all part of a bid to dismember and destabilize Turkey. Much of the supposed evidence is based on secret witnesses’ testimonies.

In a copy of the indictment that was obtained by Al-Monitor, one of the witnesses describes a scene in which “25 Turkish university students held their hands to their hearts while the American national anthem was being played.” The witness, codenamed “prayer,” claimed, “Andrew Craig Brunson was involved in these activities. Andrew’s church believes the Kurds are the [lost] 13th tribe.”

The 50-year-old pastor’s wife, Norine, who was initially detained with him when the couple went to police headquarters in Izmir thinking they were going to be issued permanent residency permits, weighed in on the sanctions debate on the State Department’s side, sources familiar with the discussions told Al-Monitor. She remains in Izmir to pay weekly visits to her husband, who has lost around 50 pounds since the beginning of his incarceration.

Turkey’s state-run Anadolu news agency reported Brunson could face up to 35 years for crimes he allegedly committed in the name of the Gulen group and the outlawed Kurdistan Workers Party (PKK). The PKK has been fighting for Kurdish self-rule inside Turkey since 1984 and its ties to the United States’ Syrian Kurdish allies is a source of bitter contention between Ankara and Washington. In January, Turkey launched a massive assault against the Syrian Kurdish militia in the northwestern region of Afrin, a move that has undermined the US-led coalition’s fight against the Islamic State farther east.

The cases of two Turkish nationals employed at the American consulate in Istanbul targeted over their alleged ties to Gulen remain hazy. Metin Topuz, a liaison officer for the US Drugs Enforcement Agency, was arrested in October. Washington hit back by suspending visa services for Turkish citizens at all of its missions in Turkey only to rescind the ban in December. Topuz remains in jail and has yet to be indicted.

A second Istanbul consulate employee, Mete Canturk, was placed under house arrest in January. His status remains a mystery. The State Department declines to comment on it. On March 14, a court in the southeastern province of Mardin rejected demands to free a third jailed local staff member who had worked for the US mission in Adana. Hamza Ulucay, who worked at the consulate as a translator for 36 years, accompanying US officials on trips to the mainly Kurdish southeast region, was briefly detained in February 2017, then arrested soon after for his alleged ties to the PKK.

Turkish thuggery has won further respite, it emerged yesterday. The Wall Street Journal reported that federal prosecutors dropped charges against 11 of 15 members of Erdogan’s security team who were accused of involvement in the violence against pro-Kurdish protesters outside the Turkish ambassador's residence in May 2017. According to the paper, prosecutors first asked a judge to dismiss charges against four members of Erdogan’s security detail. Then they dropped charges against seven others on Feb. 14, a day before Tillerson’s rendezvous with Erdogan in Ankara.

Giran Ozcan is the Washington representative of the Peoples'  Democratic Party (HDP), the largest pro-Kurdish bloc in Turkey, whose elected leaders are in jail together with nine other HDP lawmakers. He told Al-Monitor, “The dropping of charges by federal prosecutors against Erdogan’s security detail is yet another indication the United States, contrary to public opinion, tacitly encourages Erdogan’s increasingly repressive policies, both domestically and internationally.” Ozcan added, “Countless acts of aggression by Erdogan directed at US citizens in the case of the Sheridan Circle act and the Andrew Brunson case, and to US allies like the Kurds in Afrin, are going unanswered by the US government. … This appeasement policy is encouraging Erdogan’s assault on Turkish democracy and emboldening him to behave contrary to US interests in the wider region."