Erdogan wants more from Trump before Turkey will free pastor

Though the US president's friendliness toward Turkey's president in Brussels raised hopes for the release of an American pastor charged with espionage, a Turkish court denied an appeal to free Andrew Brunson today. 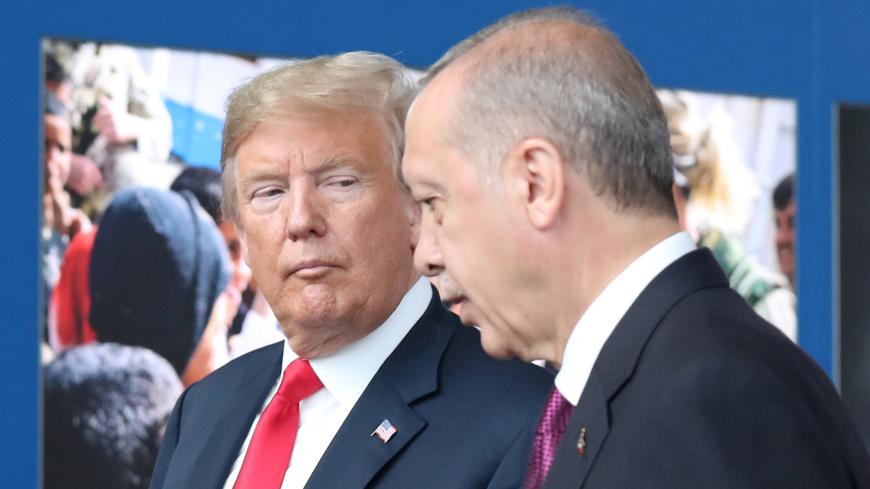 Defying expectations, a Turkish court rebuffed appeals today to free Andrew Brunson, the US evangelical pastor whose trial on bogus terror charges has become a litmus test for turbulent ties between Turkey and the United States. The trial was adjourned until Oct. 12.

The North Carolina pastor has been charged with espionage and links to coup plotters and Kurdish militants and could face up to 35 years if convicted.

Brunson continued to deny any wrongdoing in his third courtroom hearing, amid a string of wild assertions from witnesses for the prosecution. “I am an innocent man on all these charges. I reject them. I know why I am here. I am here to suffer in Jesus’ name,” Brunson said.

One of the witnesses, Murat Camdan, said he had converted to Christianity over a decade ago and knew Brunson personally. He said he had observed “mind-boggling scenes” at a church in Izmir. He said the initials of the outlawed Kurdistan Workers Party — PKK — were inscribed on three Bibles and rituals were held before the corpses of PKK fighters mourned as “martyrs who had died for their country.” Camdan claimed he witnessed all of this at a "Kurds-only" church Brunson allegedly founded alongside the Resurrection Church in Izmir, where he led a tiny flock for years. The testimony mirrors the prosecutor’s indictment, which suggests, among other things, that a Middle Eastern food recipe found on Brunson’s cellphone is proof of his culpability.

Hopes had been high that the 50-year-old who has been held in the Western province of Izmir since October 2016 would be freed pending the outcome of the trial, in part due to the personal chemistry between President Donald Trump and Turkey’s Recep Tayyip Erdogan. Their mutual warmth was most recently on display at last week’s NATO summit in Brussels, where the pair fist-bumped and Trump reportedly credited Erdogan with doing things “the right way.”

Trump has repeatedly raised Brunson’s case with Erdogan, as has Vice President Mike Pence. Secretary of State Mike Pompeo, who, like Brunson, belongs to the Evangelical Presbyterian Church, called his Turkish counterpart, Mevlut Cavusoglu, after the July 18 hearing. Details of the conversation were not made public.

In any case, neither the Trump administration’s lobbying efforts nor threats of sanctions from Congress have apparently had any effect. “Dear #Turkey people at the State Department: You’ve been played,” tweeted Steven A. Cook, a senior fellow at the Council on Foreign Relations who closely monitors Turkey.

Kristina Arriaga, the vice chair of the United States Commission on International Religious Freedom, was present at the trial and called the day’s proceedings “a mockery of justice.” She called on the United States to “continue to apply pressure, including through the use of targeted sanctions against officials connected to this case, until Pastor Brunson is released.”

Some believe Brunson is being held by Ankara as a bargaining chip to reduce the US Treasury’s anticipated multibillion-dollar fine on Turkey’s state-owned lender Halkbank for evading US sanctions on Iran. Others say it is to pressure the United States to extradite Fethullah Gulen, the Pennsylvania-based Sunni imam who is the suspected mastermind of the failed July 2016 coup against Erdogan. The Turkish leader suggested as much. “‘Give us the pastor back,’ they say. You have one pastor as well. Give [Gulen] to us,” Erdogan said in September 2017. “Then we will try [Brunson] and give him to you."

It remains unclear what the administration’s response will be, but one of the measures that has been mulled is to deny entry to the United States to a list of officials deemed to have been responsible for the unlawful detentions of US citizens and US diplomatic staff. The United States’ acting ambassador to Turkey, who observed the trial, said he was “disappointed” by the outcome. “Our government is deeply concerned about [Brunson’s] status and the status of other American citizens and Turkish local employees of the US diplomatic mission who have been detained under state of emergency rules,” Philip Kosnett said.

In October 2017, the United States suspended visa services for Turkish citizens at all of its missions after a second local Turkish employee at the US Consulate in Istanbul was arrested over his alleged links to Gulen. Another, at the US Consulate in Adana, was jailed earlier that year over his alleged ties to the PKK. The visa ban was lifted in December in return for Turkish pledges not to prosecute any further mission staff without informing US authorities in advance. But then Turkish authorities placed a third Turkish national working at the Istanbul consulate under house arrest.

by Murielle KASPRZAK and Joseph SCHMID | AFP | May 26, 2022
END_OF_DOCUMENT_TOKEN_TO_BE_REPLACED