American Pastor Andrew Brunson, who has become a political football between the United States and Turkey, finally got a chance this week to address a Turkish court. 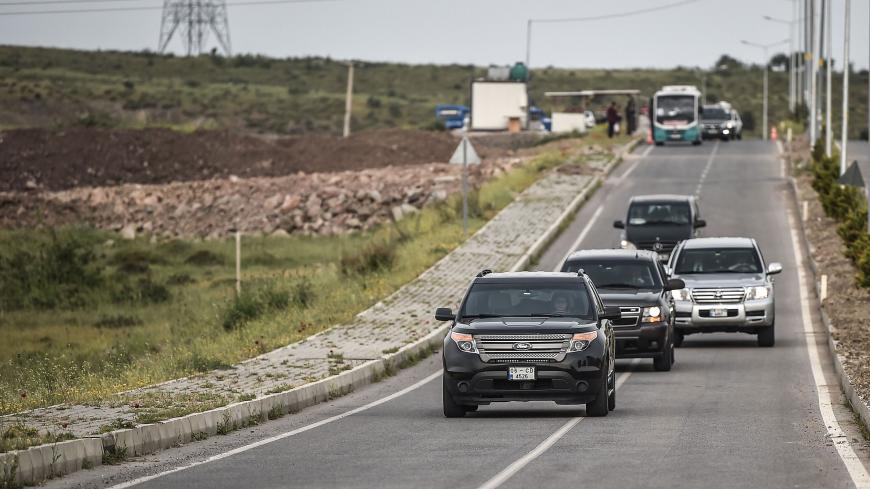 A convoy of US diplomatic vehicles arrive at the Aliaga court and prison complex for the trial of US Pastor Andrew Brunson, held on charges of aiding terror groups, in Aliaga, north of Izmir, Turkey, April 16, 2018. - OZAN KOSE/AFP/Getty Images

After 18 months in detention, the North Carolina pastor who has become a political football between America and Turkey finally got a chance this week to tell a Turkish court what he thought of being charged with terrorism and espionage.

“I don’t accept any of the allegations,” Andrew Craig Brunson told the judge. “I have never done anything against Turkey. On the contrary, I love Turkey. I have been praying for Turkey for 25 years.”

It was a passionate appeal, delivered in Turkish, from a 50-year-old man who, until his arrest in October 2016, was the little-known pastor of a Protestant church with a congregation of about 25 people in Izmir, a city on the Aegean coast.

Brunson was among tens of thousands of people arrested in Turkey’s crackdown on alleged followers of Fethullah Gulen, a Turkish Islamic cleric based in Pennsylvania, after the coup attempt of July 2016. The state claimed Gulen had instigated the attempt, in which 250 Turks died, but the cleric denied any involvement.

Brunson’s case was shrouded in mystery. The state claimed the incriminating evidence came from “secret witnesses” and refused to allow Brunson’s lawyer to see it.

Pro-government newspapers said that Brunson had praised the Gulenists in his sermons and had supported the Kurdistan Workers Party (PKK), a militant group, under the guise of humanitarian work for Syrian refugees.

When he appeared in court April 16 in Aliaga, a town 60 kilometers (38 miles) north of Izmir, Brunson was asked about his alleged Gulenist sympathies. “This is an insult to my beliefs,” he testified, wearing a black suit and open-necked white shirt. “I am a Christian. I do not belong to Islamic religious groups. Their aims are different to my aims. I have no connection with any [Gulenist] organization.”

Brunson faces up to 15 years in prison for “committing crimes on behalf of terror groups [Gulenists and the PKK] without being a member,” and another 20 years for espionage.

US State Department officials have long said they consider the charges to be nonsense. In February 2017, 78 members of Congress, led by Sen. Bob Corker, sent a letter to President Recep Tayyip Erdogan that called for Brunson’s release. The letter said there was “no evidence to substantiate the charges against him.”

But still the authorities kept Brunson in detention without charge or trial. His wife, Norine, runs a Facebook page that reported her husband’s bleak conditions were making him “extremely discouraged.” She also met Secretary of State Rex Tillerson in Ankara in March 2017, who said he had been told that an indictment for Brunson was about to be issued.

Observers suspected that what Turkey really wanted was to exchange Brunson for Gulen. When the theory was put to Prime Minister Binali Yildirim, he denied it. “These matters are separate,” the prime minister told USA Today.

But a few months later Erdogan blew Yildirim’s denial apart. Making a speech, the president referred to American calls for Brunson’s release. "'Give us the pastor [Brunson],' they say. You have one pastor [Gulen] as well. Give him to us … then we will try [Brunson] and give him to you,” Erdogan said in September.

It was an audacious offer to swap one individual for another, neither having been convicted in court.

Newspapers said that Brunson would be the first element of Turkey’s new policy of “hostage diplomacy.” It was noted that the previous month Erdogan had passed a decree that gave him the authority to exchange foreigners detained or convicted in Turkey with people held in other countries “in situations required by national security or national interests.”

Political scientist Dogu Ergil told Al-Monitor that the state’s putting Brunson up for exchange was illegal; the American was neither a prisoner of war nor had he been convicted of a crime.

In Washington, State Department spokeswoman Heather Nauert slapped down Erdogan’s proposal. “I can’t imagine that we would go down that road,” she told reporters.

When Erdogan made his offer, he said something that showed he knows nothing about how extradition works in the United States. “The [pastor] we have is on trial. Yours is not — he is living in Pennsylvania. You can give him easily. You can give him right away,” he said.

The White House cannot put Gulen on a plane to Turkey “right away.” In America, extradition is decided in the courts, where Gulen would have the full right to contest.

The strain of being a victim of Erdogan’s struggle to procure Gulen showed on Brunson when he appeared this week. In the opening hours of his trial, he responded strongly and cogently to the questions put to him. His defense counsel did not need to intercede on his behalf. But in the afternoon the court ruled that Brunson would remain in custody and he would be held in solitary confinement. Brunson broke down in the dock. He said solitary confinement had already affected his state of mind.

The judge adjourned the trial until May 7.

Soner Tufan, the director of Radio Shema, a Christian radio station in Ankara, told Al-Monitor that the three-week adjournment was similar to the 18 months taken to bring Brunson to trial: a deliberate dragging out of proceedings for political purposes.

Tufan was skeptical the trial would be fair. He pointed to the judge’s frequent interrupting of Brunson during his testimony.

The judges and prosecutors must know that Washington is watching them. President Donald Trump has repeatedly raised Brunson’s case with Erdogan. And among the observers in court were Sen. Thom Tillis from North Carolina and US Ambassador-at-large for religious freedom Sam Brownback.

“The administration is deeply concerned about this case,” Brownback told the press outside the court. He said the administration believed Brunson to be innocent, and it hoped the court would come to the same conclusion.

“You will continue to see very high-level US government interest in this until he is released,” Brownback said.