Life sentence hangs over US pastor as Washington sizes up Ankara

Though Congress was reportedly deterred by the State Department from imposing sanctions on Turkey, the indictment of pastor Andrew Brunson may alter the mood as Mike Pompeo replaces Rex Tillerson as Secretary of State. 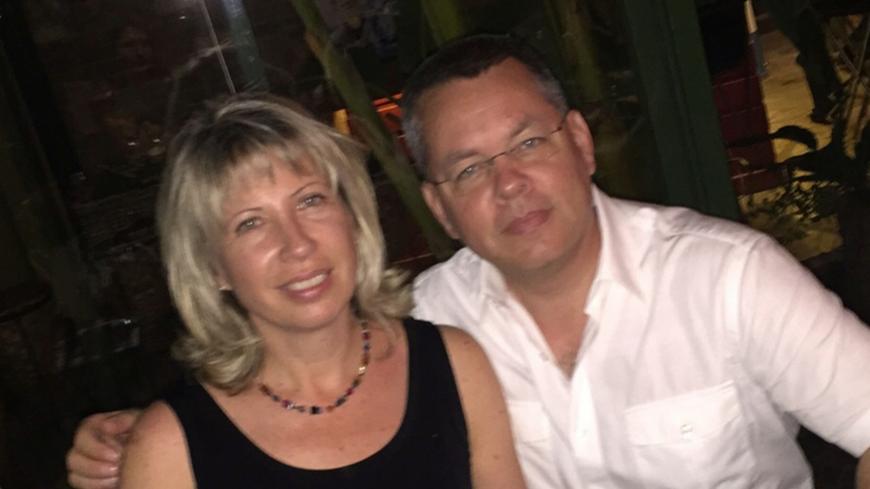 Andrew Brunson, who was detained in October 2016 for his alleged involvement in a failed attempt to overthrow the Turkish government, is pictured with his wife Norine. Posted to Facebook Oct. 28, 2016. - Andrew and Norine Brunson

A Turkish prosecutor has demanded life imprisonment for Andrew Brunson, the North Carolina pastor who was detained in October 2016 for his alleged involvement in a failed attempt to overthrow the Turkish government that year.

The prosecutor in the province of Izmir, where Brunson is being held, charged the 50-year-old with being “a member and executive of the terrorist group” accused of being behind the coup attempt. The Turkish government holds Fethullah Gulen, a Sunni cleric who lives in self-imposed exile in Pennsylvania, responsible for the coup and is demanding his extradition.

But the United States has refused to hand over the septuagenarian imam on the grounds that Turkey has not provided sufficient evidence to prove its claims against him. Brunson’s detention raised questions about whether Turkey is using him as a bargaining chip to get Gulen.

Turkish President Recep Tayyip Erdogan reinforced those suspicions in a speech to police academy graduates last year. “'Give us the pastor back,’ they say. You have one pastor as well. Give him [Gulen] back to us. Then we will try him [Brunson] and give him to you."

Brunson, who led a tiny flock at the Resurrection Church in Izmir, protests his innocence, and fellow clergy in Turkey have vouched for him. Jeffrey Jeremiah, the state clerk of the Evangelical Presbyterian Church of America, told the independent Turkish media outlet Diken last week that his church had sent a letter to Erdogan appealing for Brunson’s release but that he had not received any response. Noting that Brunson had lost 50 pounds since his detention, Jeremiah said of the pastor, “He has been in some deep, deep valleys that the Lord has brought him through. … He is a faithful man of God who has given his life to help and serve the Turkish people."

On Friday, Brunson’s daughter Jacqueline told the United Nations Human Rights Council in Geneva that the terror allegations against her father were “absurd.” She said, “He is not an armed terrorist trying to overthrow any government, my father is a peaceful pastor."

Still, today’s indictment may be a hopeful sign that the court will go through the motions of prosecuting Brunson and then let him go back home, as it did with Turkish-German journalist Deniz Yucel. The freelancer who had been held for a year on terror charges was released from custody pending trial on Feb. 16 after a Turkish court accepted an indictment seeking up to 18 years imprisonment. He promptly got on a plane and returned to Germany. Critics described the event as a “dirty deal” whereby the German government allegedly resumed talks to sell Turkey military equipment that it was threatening to withhold in exchange for Yucel’s freedom.

It's too early to say how Brunson’s case will play out.

The indictment came as the US Congress weighs imposing sanctions on Turkey for what it calls the unlawful detention of US citizens and Turkish employees working at US diplomatic missions in Turkey. The proposed measures include visa bans on Turkish officials established as having participated in the decisions that led to their incarceration. The State Department has pushed back amid concerted efforts to repair relations with Ankara that have steadily deteriorated over US support for Kurdish militants in Syria and the Gulen saga, among other things.

As of the beginning of this week, Congress was reportedly swayed by the State Department’s arguments, but the indictment against Brunson may alter the mood. It also remains unclear what impact if any today’s announcement that CIA Director Mike Pompeo will be replacing Rex Tillerson as the new secretary of state will have on the attempted reset with Turkey.

On July 16, 2016, after the coup against Erdogan had unfolded, Pompeo likened Turkey to Iran. He called each a "totalitarian Islamist dictatorship" in a tweet that has since been deleted. He did not hold office at the time.

Aykan Erdemir is a former Turkish member of parliament and senior fellow at the Foundation for Defense of Democracies, a conservative think tank. He told Al-Monitor, “Appeasement brings out the worst in Erdogan. He has a track record of doubling down on counterparts he sees as pushovers. In his relations with Russia and Germany, Erdogan has demonstrated he is a pragmatist who is capable of radical U-turns.” Thus, “Washington can learn from Moscow and Berlin’s handling of Erdogan.” But there are few signs that the Trump administration is willing to embrace their approach.