Turkey doubles down in pastor row with US

American pastor Andrew Brunson, behind bars in Turkey on terrorism-related charges, risks up to 35 years in jail in a politically loaded case that critics describe as “an eclipse of reason.” 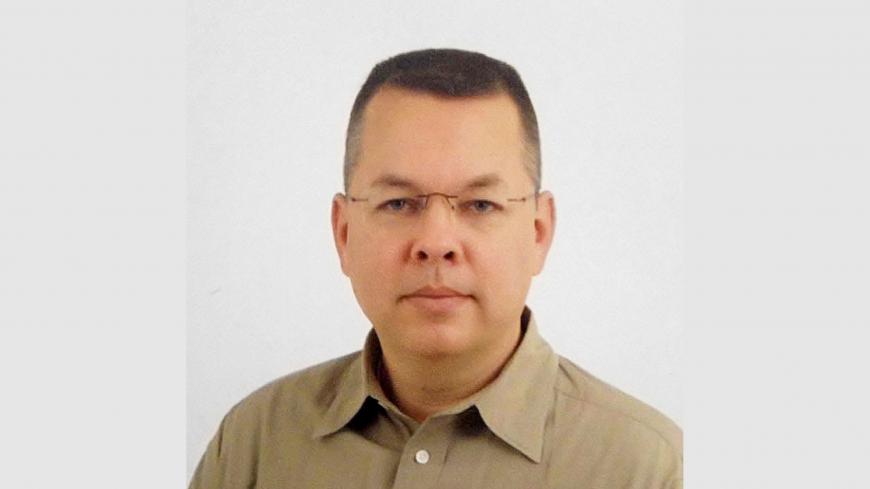 American pastor Andrew Brunson, held in Turkey since October 2016 on terror-related charges, is seen in an undated picture. - Facebook/Release International

A Turkish prosecutor is seeking up to 35 years in jail for Andrew Brunson, the American pastor at the heart of a bitter diplomatic spat between Ankara and Washington. Held on terror-related charges since October 2016, Brunson has seemingly become a bargaining chip, with President Recep Tayyip Erdogan suggesting last year that the pastor could go home if Washington extradited Fethullah Gulen, the Pennsylvania-based preacher accused of masterminding the July 15, 2016, coup attempt.

According to media reports, a prosecutor in the western city of Izmir where Brunson is held has finally drawn up an indictment against the 50-year-old, who has been based in Turkey for more than two decades. Brunson pastored the Resurrection Church in Izmir, where he lived with his family as part of a tiny Protestant community. Neither Brunson nor his lawyer has seen the indictment yet, though it was leaked to the media this week.

Speaking to Al-Monitor, Brunson's lawyer Ismail Cem Halavurt deplored that “the leaking of the indictment before the parties have seen it amounts to a violation of confidentiality.”

Soner Tufan, the spokesman of the Association of Protestant Churches in Turkey, said, “We have failed to obtain the indictment thus far. We don’t know what exactly the charges are.”

Brunson's wife is said to be disappointed, upset and anxious after the news of the indictment. At the same time, she is somewhat relieved, for the judicial process seems to be finally moving after stagnating for months.

Though the details of the charges remain ambiguous, Brunson’s interrogation by prosecutors provides some insight into the case. According to Halavurt, the accusations rest on the testimony of a secret witness, with two issues standing out.

The first is a claim by the secret witness that Brunson met frequently with Bekir Baz, who is said to be the person responsible for the Aegean region in the Fethullah Gulen Terror Organization (FETO), the term used in Turkey to refer to the Gulen community. The Gulen community was once a main ally of the ruling Justice and Development Party until several years ago when they had a falling out. Brunson has told the prosecutor he does not know a person named Bekir Baz and has not met with any FETO member knowingly or willingly.

Another accusation stems from a meeting between Brunson and lawyer Taner Kilic, the jailed head of Amnesty International in Turkey. Before his incarceration, Brunson and his wife were sent to a deportation center in Izmir on Oct. 7, 2016, pending expulsion from Turkey. At that time, he met for legal counsel with Kilic, who specializes in immigration issues. Kilic himself landed behind bars in June 2017, also on charges of collaboration with FETO, and international human rights groups continue to call for his release. Brunson’s meeting with Kilic for legal counsel is now considered incriminatory evidence against him.

Pro-government papers claim that Brunson was involved in Gulen’s project on interfaith dialogue. Halavurt, however, denies that Brunson attended the meeting, stressing that witnesses have also debunked the prosecution’s claims to that effect.

The prosecution is seeking up to 35 years in prison for Brunson on charges of espionage and committing crimes on behalf of FETO without being a member of the group.

For Tufan, the charges are outrageous. “This is an eclipse of reason,” he told Al-Monitor. “To claim that Andrew was a FETO executive and sought to destroy this country is like an insult and offense to reason. Who would believe such a thing? He has spent an important part of his life trying to stay in this country, telling about Jesus in all his sermons and works. How could such a person be the member or the executive of an Islamic order?”

According to Tufan, Brunson said in his testimony to the prosecution, “I am a Christian clergyman and have no links to any Islamic order. I love God, and I am trying to tell people about God in appropriate conditions." Tufan added, “And that’s the person we know."

Tufan believes that Brunson is being used as a bargaining chip between Erdogan and US President Donald Trump and remains in prison “for political reasons only.”

Asked whether the pastor is a kind of a hostage, Halavurt said, “As a lawyer, I cannot make such a comment. The core problem pertains to Turkey’s judicial system. The issue of holding people hostage and threatening their personal freedom and security — we have seen this in the case of the German journalist [Deniz Yucel]. Unfortunately, certain political forces are involved in this matter.”

According to Halavurt, Brunson is very disturbed about being embroiled in a political spat. Referring to a recent meeting with his client, the lawyer said, “Brunson does not understand these political polemics. He says that as a clergyman, he wants to keep himself out of this. He is irked that his name has become the subject of political polemics and believes that the United States and Turkey should not draw conclusions based on his situation.”

The pastor is in good physical health but “not well at all psychologically,” Halavurt said. “He wants to be a free person again as soon as possible.”

The details of the charges remain off limits to Brunson’s defense, and his family tries to follow the judicial process via the media. Despite the many setbacks, the small Protestant community in Turkey still hopes for justice to prevail.

Beyond Brunson’s personal plight, the case marks an important stage in the grievances of the Protestant community. The American pastor has not been alone in the crosshairs of the Turkish authorities.

In its 2017 rights violation report, the Association of Protestant Churches lays out a long list of arbitrary moves targeting its members. In March 2017, for instance, Shinhyung Kang, a South Korean pastor in Izmir, faced deportation for serving “illegally” as a clergyman. According to the report, many other Protestants of foreign nationality in Izmir, Istanbul, Mersin, Gaziantep, Trabzon, Erzurum and Bursa faced deportation or were denied renewal of their residence permits. Coupled with Brunson's arrest, the deportations and the denial of residence permits “led to serious anxiety, especially among foreign church members and leaders, and some of them left Turkey of their own volition along with their families,” the report says.