A representative of Turkey’s Protestant Christians talks to Al-Monitor about how the politically charged trial of their co-religionist, American pastor Andrew Brunson, affected the tiny community. 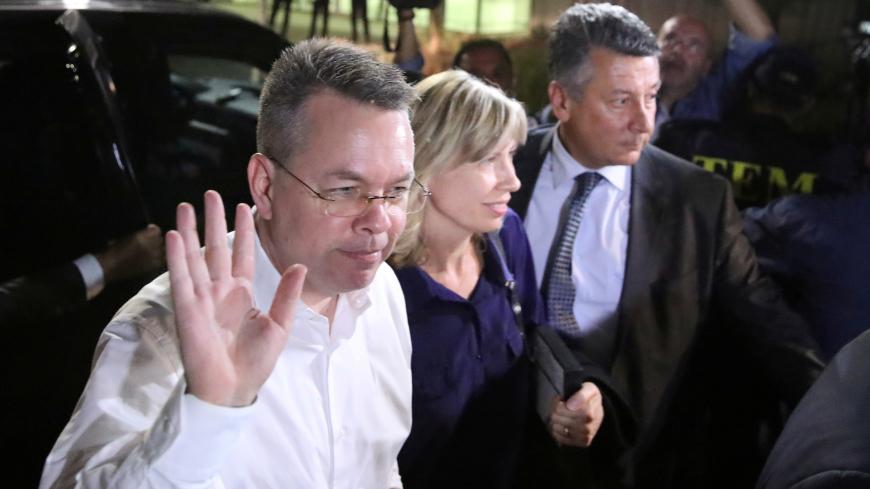 US pastor Andrew Brunson and his wife, Norrine, arrive at the airport in Izmir, Turkey, Oct. 12, 2018.

Turkey’s release of American pastor Andrew Brunson and his immediate departure to the United States last week was followed almost as a “rescue operation” by the international public. The evangelical missionary, whose case was a flashpoint in worsening Turkish-US ties, had lived for two decades in the western Turkish city of Izmir, running a small Protestant church, when he landed behind bars in 2016 on charges of espionage and links to terrorist groups. Diplomats breathed a sigh of relief as the pastor boarded the special plane that took him home, but what about Turkey’s tiny Protestant minority that he left behind? How did the saga affect the community, which numbers only about 7,000 people, mostly converts from Islam?

In an interview with Al-Monitor, Soner Tufan, board member and spokesman of the Association of Protestant Churches in Turkey, said the community has emerged stronger from the trauma, much to the surprise of some observers who had expected to find a mood of distress, apprehension and even fear.

Of note, Brunson was detained as part of a ferocious crackdown on suspected coup supporters and various oppositionists after the failed coup attempt on July 15, 2016. Western nationals, including journalists and rights activists, were also caught in the dragnet as Ankara claimed foreign involvement in the putsch.

Recalling what the Protestant community went through, Tufan said, “For the past decade, we have been writing reports on rights violations concerning Protestants. Looking at those reports, we see that oppressive practices against non-Turkish Protestants have increased fourfold in the past two years. Many of them have been deported on grounds they lacked the necessary documents to stay in Turkey, while some were kicked out for being ‘a threat to national security.’ They all left upset, their lives turned upside down at a stroke. Others left without any pressure because they believed they are no longer safe in Turkey.”

And how did Brunson’s arrest and high-profile trial bear on the community? “People tend to believe the church was weakened by all that happened, but curiously, that’s not the case,” Tufan said.

He explained, “The people’s attachment to their church grew stronger. [The Brunson affair] led them to embrace more strongly their faith. I lead services at the Kurtulus Church in Ankara every Sunday. I’ve been at this church for 30 years and I can say that the number of people coming to the church increased thrice after what happened to Brunson. The place even began to become jam-packed, with people overflowing out the door.”

“And let me tell you something even more remarkable,” he said. “Not only Protestants, but also Orthodox and Catholics, people from different sects, grew closer to each other. They offered us solidarity.”

Describing the sentiment at Brunson’s church in Izmir, Tufan said, “They were initially shaken — that’s true. But soon, we witnessed big crowds and solidarity at the Resurrection Church as well.” Shortly after Brunson’s release, the congregation purchased the building housing the church, a plan that had been suspended following the pastor’s arrest, Tufan said, adding, “This has a symbolic importance.”

How does the Protestant community feel now that Brunson’s trial is over? “It feels stronger,” Tufan replied. “For Christians, suffering is honorable.” Recalling the gruesome murder of three missionaries, among them a German, in the eastern city of Malatya in 2007, he added, “There were hardships in Malatya for several years, but today, there are more people than before. Andrew Brunson’s church experienced setbacks as well, but now more people want to pray there.”

Tufan conceded that the charges against Brunson and his portrayal as a conspirator in the media had caused vacillation within the community. “Sadly, I heard even some of our own asking whether Brunson could be a spy. Those were exceptions — like two people out of 100,” he said. “Yet this shows how powerful the media is in creating perceptions, just as the trial showed how one could create a terrorist out of the most honest and purest and simplest man on earth.”

Ultimately, Tufan said, things boiled down to how credible Turkey’s justice system is. Though the court sentenced Brunson to three years in jail, it ruled to release him based on time already served. Secret witnesses, meanwhile, retracted incriminating testimonies, and the outcome was widely seen as Ankara’s acquiescence to US pressure in a “sham trial.”

Tufan voiced disappointment that the Christian community “did not see solidarity” from other quarters in Turkey, including Muslims, human rights and civic society groups and the left-wing opposition.

“Brunson’s first defense lawyer quit the case. His current lawyer, Ismail Cem Halavut, defended him alone,” he said. “Only Halavut and community representatives attended the hearings. We saw no one on our side.”

Asked whether the Protestant community remains anxious, Tufan evoked the notion of suffering and endurance in Christian faith, saying that Brunson’s ordeal was neither the first nor the last test for Christians in a land where religious prejudices remain strong. Recounting his own experience, he said, “When I first told my family that I had become a Christian, I got such a beating that I had my nose broken. And when I first uttered I was a Christian outside the family, I got such a beating that I was hospitalized for three days.”

On political level, Tufan said, ethnic and religious groups outside the Turkish-Muslim Sunni majority have always been under the scrutiny of the state. “Alevis and Jehovah’s Witnesses are the subject of the same scrutiny in this sense,” he said. “In my view, Protestants are not seen as a big threat at present, but if something happens one day, they might think, ‘Let’s stamp them out.’ … The real surprise for me will be if the leaders of this country respect and appreciate me for my faith and recognize my rights.”

Brunson’s lawyer has said he will appeal the pastor’s conviction. Tufan noted, however, that no legal action was planned against the secret witnesses who were instrumental in the pastor’s arrest before changing their testimonies two years later. “Brunson has forgiven them,” he said.