Turkey's Protestant community fears that Ankara could use an imprisoned American pastor as a bargaining chip to press for the extradition of Pennsylvania-based Turkish preacher Fethullah Gulen. 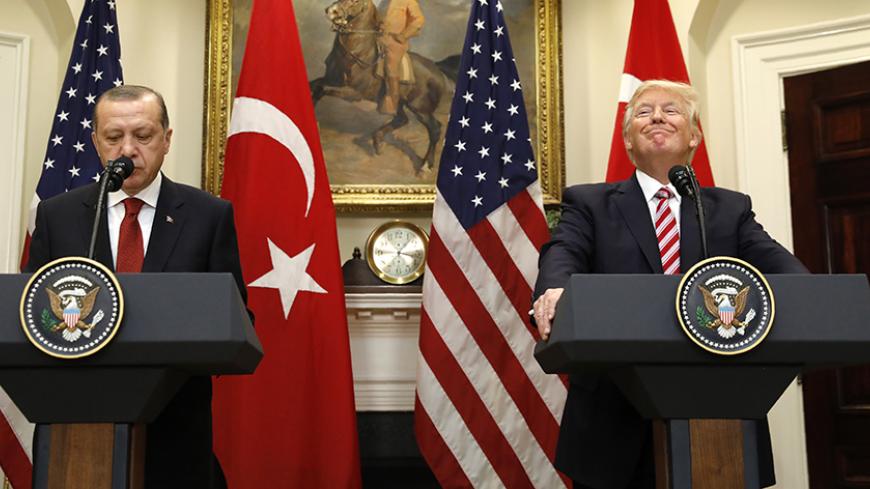 Turkish President Recep Tayyip Erdogan (L) and US President Donald Trump deliver statements to reporters in the Roosevelt Room of the White House in Washington, May 16, 2017. - REUTERS/Kevin Lamarque

Turkish President Recep Tayyip Erdogan's May 16 meeting with his US counterpart Donald Trump was eagerly anticipated in Turkey amid fury over Washington's decision to supply heavy weapons to the People's Protection Units (YPG), a Syrian Kurdish group that Ankara sees as a terrorist organization. As expected, Erdogan protested the Trump administration's move and, in another major bilateral issue, pressed for the extradition of Fethullah Gulen, the Pennsylvania-based Turkish cleric who stands accused of masterminding the coup attempt last year. Yet, Trump made a counterdemand that few in Turkey had foreseen, urging the release of American pastor Andrew Brunson, held in Turkey since October on terrorism-related charges that prosecutors have yet to lay out in an indictment.

Brunson, based in Turkey for more than two decades, was the pastor of the Resurrection Church in Izmir, Turkey’s third largest city, where he lived with his family as part of a tiny Protestant community. His life changed in the wake of the coup attempt on July 15, 2016, as Ankara launched a massive crackdown on suspected Gulenists and unrelated oppositional quarters. Brunson received written summons from the police on Oct. 7, and promptly reported to the police station, accompanied by his wife. There he learned he was considered a national security risk under a measure known as "code G-82," which normally leads to deportation. With no other explanation, the Brunsons were taken to a deportation center in Izmir. Though his wife was later released, Brunson spent more than 60 days in the facility, barred from contacting his lawyers and US consular officials. In December, he was imprisoned pending trial.

Though the pastor has been in jail for half a year now, the prosecutors have yet to draw up an indictment to detail the charges. The authorities have imposed secrecy on the case file, meaning that Brunson himself knows little about the accusations he faces. The Turkish press has portrayed a foreigner suspected of collaborating with subversive forces in Turkey, but their accounts have been conflicting. Initially, pro-government papers reported that Brunson was suspected of aiding the Kurdistan Workers Party (PKK), which Ankara, along with Washington, considers a terrorist organization. The story later changed, and the pastor was said to have links with Gulenist circles, which the government now calls the Fethullah Gulen Terror Organization.

The sole evidence against Brunson is allegedly the testimony of a secret witness, who claims that the pastor went frequently to Gaziantep, a province on the Syrian border, where he provided aid to the PKK.

In remarks to Al-Monitor, Soner Tufan, the spokesman of the Association of Protestant Churches in Turkey, said Brunson did go to Gaziantep, but his trips aimed to help Syrian refugees in the region. The pastor provided food, clothes and other supplies to the refugees, he said, adding, "All churches in Turkey did the same."

The details of the accusations, however, seem to be of little relevance for the Protestant community, as it sees the case as a completely political affair. "This is not a criminal case," Tufan said. "Judging by the consequences so far, one can easily say it is a political one."

Asked to elaborate on "the consequences," he said: "After Brunson's arrest, members of the Protestant community in various cities had their working and residence permits cancelled. They were told they could not stay in Turkey even as tourists. Some who were abroad for holidays were not allowed to re-enter Turkey and they, too, were told they were in the scope of G-82."

The picture Tufan paints shows that even the small Protestant community has been caught in the post-coup dragnet, which has swept up thousands of public servants, academics, journalists and members of civil society groups. The Brunson case, however, is increasingly standing out. The Protestant community is apprehensive that Ankara could use the pastor as a trump card in its floundering efforts to secure Gulen's extradition from the United States, which was a top issue on Erdogan's agenda with Trump.

"We are worried that Branson's release and return to the United States could be made a bargaining chip in return for Fethullah Gulen's extradition to Turkey," Tufan said.

Visitors to Brunson in jail say the pastor is fine physically, but not well psychologically, feeling quite depressed for being unjustly imprisoned. He is now able to meet regularly with his wife, lawyers and US consular officials, while the Protestant community is waging an active international campaign to secure his release.

Whether these efforts will bear fruit remains to be seen, but Jay Sekulow, Brunson's lawyer in the United States, who met with Trump ahead of Erdogan's visit, says that Washington is committed to pressing ahead for the pastor's release. At the Erdogan-Trump meeting, the sides decided to task their justice ministers to work jointly on the issue, but the strings are no doubt in Erdogan's hands.

The demand of the Brunson family and the Protestant community in Turkey is rather simple. "Let the law proceed. Put forth the evidence, if you have any, and start the trial as soon as possible," Tufan said. "Justice is all we want."