US sanctions loom over defiant Turkey

Congress is threatening to pursue targeted sanctions against Turkish officials as tensions heat up over the ongoing detainment of American Pastor Andrew Brunson. 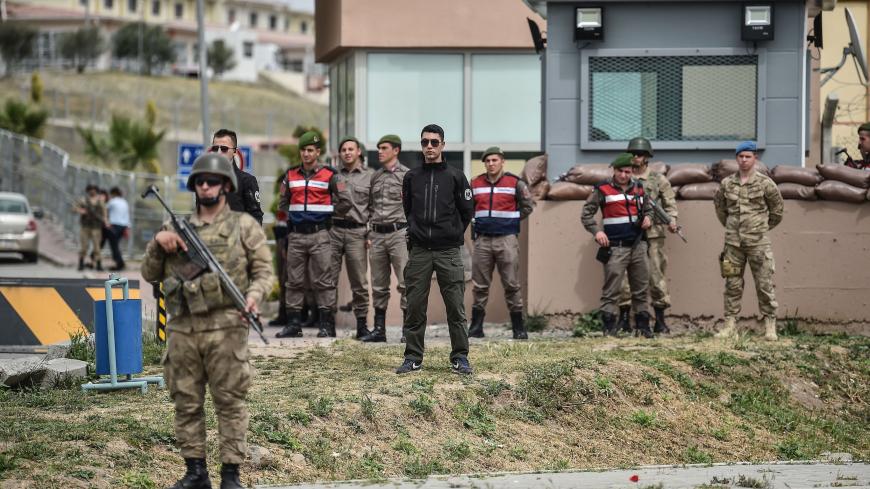 Turkish soldiers stand guard at the entrance of the Aliaga court and prison complex, during the trial of US Pastor Andrew Brunson, held on charges of aiding terror groups, in Aliaga, north of Izmir, on April 16, 2018. - GETTY/Ozan Kose

Congress has revived threats to sanction Turkey over the detention of North Carolina Pastor Andrew Brunson, as well as other US citizens and Turkish staff members of US diplomatic missions that it believes are being held as “political pawns.”

Sens. James Lankford, R-Okla., and Jeanne Shaheen, D-N.H., declared in a joint statement April 19 that they would pursue targeted sanctions against Turkish officials in the foreign affairs spending bill for fiscal year 2019. Their statement noted that Turkish President Recep Tayyip Erdogan “has continued to violate the trust between our two nations by holding Pastor Brunson and other innocent Americans behind bars on fabricated charges. … Turkish officials who participate in the detainment of any innocent American citizen should face international consequences, and the actions against Pastor Brunson, in particular, qualify as hostage-taking.”

Piling on the pressure, a bipartisan group of 66 senators in a letter to Erdogan called the mix of terrorism and espionage charges brought against Brunson “an absurd collection of anonymous accusations, flights of fantasy and random character assassination.” That a Turkish court should accept such an indictment as the basis for prosecution, they wrote, “removes any shred of doubt that Andrew Brunson, like other American citizens, as well as Turkish employees of the US government detained under the state of emergency, is being used as a political pawn by elements of the Turkish government bent on destroying the longstanding partnership between two great nations.”

The letter further states that the Donald Trump administration had been patient “in the hope that justice would be done” — in other words, that Brunson would be freed after his first courtroom hearing on Monday. But the presiding judge ordered Brunson back to prison, saying his trial would resume on May 7. The 50-year-old broke down in tears as he protested his innocence.

The senators wrote that they now have “concluded that other measures will be necessary to ensure that the government of Turkey respects the right of law-abiding citizens and employees of the United States to travel to, reside in and work in Turkey without fear of persecution.”

The letter comes amid growing administration pushback against Turkey, a critical NATO ally, over its increasingly aggressive behavior at home and beyond its borders.

Earlier this week, Trump tweeted about Turkey for the first time, saying Brunson was being “persecuted in Turkey for no reason” and that he should be allowed to come home. Vice President Mike Pence chimed in with a tweet of his own. “Spoke to Pastor Brunson’s wife this week. Assured her of our prayers & @POTUS and I are monitoring his trial in Turkey … It’s time the Turkish govt release him.”

Turkey’s flirtation with Russia is also drawing Washington’s ire. Assistant Secretary of State for European and Eurasian Affairs Wess Mitchell told the House Foreign Affairs Committee on April 18, “Turkey lately has increased its engagement with Russia and Iran. … The ease with which Turkey brokered arrangements with the Russian military to facilitate the launch of its Operation Olive Branch in Afrin District — arrangements to which America was not privy — is gravely concerning.”

Mitchell was referring to Turkey’s January offensive against the Syrian Kurdish People’s Protection Units (YPG). The group, labeled terrorists by Ankara because of its links to the Kurdistan Workers Party (PKK) rebels inside Turkey, is the United States’ top ally against the Islamic State in Syria.

Mitchell warned, “Ankara should be mindful of the risks in making strategic concessions to Moscow in order to achieve its tactical objectives in Syria.” Moreover, he said, Ankara’s plans to purchase the Russian S-400 missile system “could potentially lead to sanctions … and adversely impact Turkey’s participation in the F-35 [fighter jet] program.”

The State Department’s annual country-by-country report on human rights, which was made public today, contained exceptionally harsh language regarding Turkey. It catalogs a spike in torture — and in some cases, deaths — of detainees, inhumane prison conditions, stifling of free expression, jailing of journalists and “credible allegations that the government contributed to civilian deaths in the connections with violent clashes” between security forces and the PKK.

Until recently, the State Department’s Bureau of European and Eurasian Affairs was Ankara’s fiercest ally on multiple fronts. It has been lobbying the White House to scotch the Pentagon’s partnership with the YPG. It persuaded Congress to excise sanctions language from this year’s appropriations bill that would have sanctioned Turkish officials responsible for unlawful arrests of US citizens. State Department officials argued time was needed to persuade Turkey to let Brunson and others go.

The State Department may have believed it had a deal, but the prosecutor’s choice of the May 7 date for a second hearing has reinforced suspicions that Brunson’s fate is closely linked to that of a high-profile Turkish detainee in the United States. Mehmet Hakan Atilla, the former deputy chief executive of state-owned Halkbank, is facing up to 15 years in prison for his alleged role in violating US sanctions against Iran. A US judge postponed Atilla’s sentencing to May 7, and in a further twist, delayed it again to May 16.

Ankara's bigger worry is the size and terms of the fine the US Treasury will likely slap on Halkbank for sanctions-busting. Turkish officials warn that if the fine is "disproportionately high" and ends up coming out of Turkish taxpayers’ pockets, this will sink relations to new lows.

The initial sanctions language crafted by Lankford and Shaheen last year would have only been travel bans. A well-informed source told Al-Monitor on strict condition of anonymity, “As most sanctions go, there was broad waiver authority for national security purposes … and when [the State Department] spoke to the senators, they agreed to withdraw the language from the appropriations bill because [Andrew Brunson’s wife] Norine Brunson felt it best.”

Besides, former Secretary of State Rex Tillerson was also opposed. Now, with Brunson and others still behind bars and Tillerson gone, the State Department — at Mitchell’s prodding — is toughening its stance, the source said.

The text of the new sanctions language that will be reinserted in the appropriations bill has not been finalized yet, but the aim is to “push for the highest level” in terms of Turkish officials who would be targeted by the proposed sanctions.

“Chances of the sanctions language appearing in the next funding cycle are very high,” the source predicted. Moreover, none of this precludes the use of sanctions under the Global Magnitsky Act against Turkish officials for human rights abuses or corruption. “There will be annual lists. This is a very broad authority. If human rights groups want anyone added to the list, they have to build the legal case and give it to Congress to submit to the administration. It’s terrible, but this is the first time the Hill stopped listening to State on Turkey. This is a good time to push,” the source added. “What Erdogan has been doing is shocking. And [the State Department] is shocked. They don’t know what to do. And they’ve been beaten [by senators] into submission.”

With Turkey entering a new election cycle following the announcement of snap polls on June 24, it’s rather unlikely Erdogan will care. More likely, he will brush aside senators’ calls to free Brunson and whip up further anti-Western feelings so as to woo nationalist voters instead.

Yet should Mike Pompeo be confirmed as the new secretary of state, Washington may grow even less accommodating. Pompeo, a former Republican congressman from Kansas, served as a deacon and taught Sunday school at the Eastminster Presbyterian Church in Wichita, which is part of the Evangelical Presbyterian Church that Brunson belongs to.