The US president is sanctioning two top officials in hopes of pressuring Ankara to release a US pastor, with uncertain results. 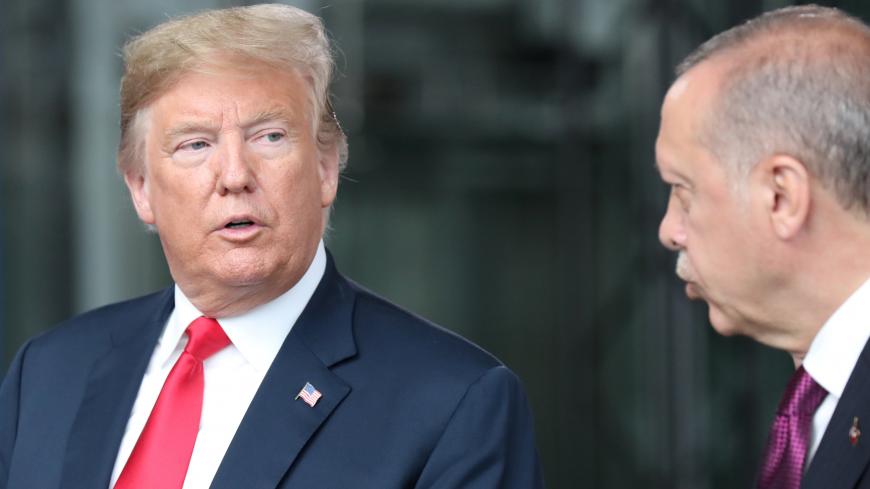 White House spokeswoman Sarah Sanders announced this afternoon that the Treasury Department was adding Turkish Justice Minister Abdulhamit Gul and Interior Minister Suleyman Soylu to its sanctions list, saying they had played “leading roles” in the arrest and detention of US pastor Andrew Brunson. The order blocks any property or interest in property of both ministers within US jurisdiction while prohibiting US persons from engaging in transactions with them.

The measures come less than a week after Trump first threatened sanctions unless Ankara released Brunson, who has been detained for nearly two years. Turkey accuses the evangelical pastor of having ties to the outlawed Kurdistan Workers Party and to exiled Muslim cleric Fethullah Gulen, whom Ankara accuses of masterminding the failed 2016 military coup.

“Pastor Brunson’s unjust detention and continued prosecution by Turkish officials is simply unacceptable,” Treasury Secretary Steven Mnuchin said in a statement. “President Trump has made it abundantly clear that the United States expects Turkey to release him immediately.”

“The US attempt to impose sanctions will not remain without an answer,” Turkish Foreign Minister Mevlut Cavusoglu tweeted.

The Treasury Department sanctioned Gul and Soylu under the Global Magnitsky Act, a 2016 law that allows the government to punish foreign officials for human rights abuses.

Bloomberg reported that a deal to secure Brunson’s release had collapsed in the lead-up to today’s sanctions. Under the deal, the United States would have imposed a light fine on state-run Halkbank for evading sanctions on Iran while repatriating the bank’s deputy CEO, Mehmet Hakan Atilla, back to Turkey to serve the remainder of a 32-month prison sentence doled out by a US judge in May. As part of the deal, Trump also persuaded Israel to release Ebru Ozkan, a Turkish woman jailed for ties to Hamas. Ankara, however, transferred Brunson to house arrest last week instead of repatriating him to the United States, provoking Trump’s fury.

Despite today’s escalation, some experts worry that the administration’s sanctions may be too late and too narrowly focused to force Turkey’s hand.

“The problem is that the US has sent mixed messages,” Howard Eissenstat, a Turkey specialist at St. Lawrence University in New York, told Al-Monitor. “We’ve embraced Erdogan publicly even as we voiced concern. We have not been able to play hardball effectively. … We have not been able to demonstrate a firm resolve around basic points of principle over the long haul.”

Eissenstat also pointed out that Trump’s sanctions are squarely focused on Brunson despite Turkey’s abuse and detention of other US citizens, such as NASA scientist Serkan Golge and locally employed consulate staff.

“By focusing it narrowly on Brunson and personalizing it, it weakens the US position and makes it harder for Turkey to resolve this,” said Eissenstat. “Vice President [Mike] Pence took a personal interest. It fits into concerns about Christians overseas … and so it was the case that captured people’s imaginations in a way that other cases did not.”

“We need to be demonstrating that all US citizens and staff are equally protected,” he cautioned.

Although the Trump administration’s newfound aggressiveness took some lawmakers by surprise, congressional backlash against Turkey has steadily been mounting for months, exacerbated by other policy issues.

“I applaud the Trump administration for sanctioning individuals within Erdogan’s gov’t who are responsible for the imprisonment of Andrew Brunson & other Americans,” tweeted Sen. James Lankford, R-Okla., a key leader in congressional efforts to sanction Turkey. “As a nation, we owe it to those who are being jailed unjustly to hold their Turkish perpetrators accountable.”

Lankford is a lead co-sponsor of a bipartisan bill restricting Turkey’s access to international financial assistance from the World Bank and other multilateral financial institutions until Ankara stops detaining US citizens and consular staff. The Senate Foreign Relations Committee advanced the bill last week.

Eissenstat said Turkey’s failure to understand US outrage over Brunson’s imprisonment — particularly in Congress — played a role in the diplomatic crisis.

“I think that [the Turks] were relying on Trump to save the day,” added Eissenstat. “They don’t really understand the role of Congress. They don’t see that Congress has become more aggressive since the Trump administration.”