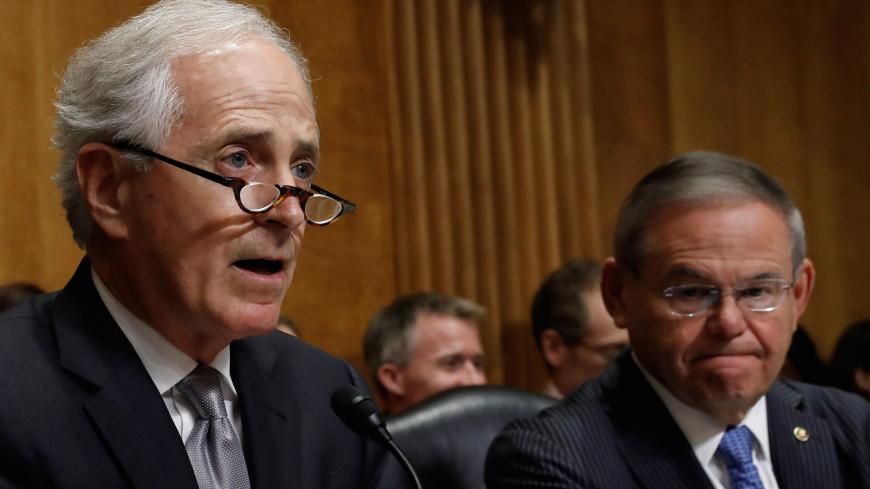 President Donald Trump threatened to impose sanctions on Turkey today for its ongoing detention of a US citizen, bringing his administration in line with a monthslong congressional effort to punish the NATO ally.

Trump took to Twitter to threaten “large sanctions on Turkey for their longtime detention of Pastor Andrew Brunson,” adding, “This innocent man of faith should be released immediately!”

The president’s threat came a mere hour after a key Senate panel advanced legislation intended to cut Turkey off from international financial institutions.

“We never wanted this bill to be necessary, but we warned the Turkish government that there would be consequences if it did not cease its unjust detention and harassment of US citizens and locally employed embassy staff,” Senate Foreign Relations Committee Chairman Bob Corker, R-Tenn., said before the panel voted unanimously to pass the Turkey International Financial Institutions Act. “We will continue to pressure the Turkish government until we see an end to the harassment and arbitrary detention of all US citizens.”

The bill directs the US-appointed executive directors of the World Bank’s International Finance Corporation and the European Bank for Reconstruction and Development to vote against extending any “loan or financial or technical assistance” to Turkey. The prohibitions are to remain in place until the president certifies that Ankara “is no longer arbitrarily detaining or denying freedom of movement to United States citizens … or locally employed staff members of the United States mission to Turkey.”

The legislation does not go so far as to mandate a no vote at the International Monetary Fund (IMF). It does, however, direct the IMF’s US director “to work with other key donor countries to develop a coherent policy approach to future engagements with and lending to the government of Turkey, in a manner that will advance human rights.”

“This is probably a potential sanction that Ankara deeply cares about given the state of Turkey’s economy,” said Aykan Erdemir, a former Turkish member of parliament from the opposition who is now a senior fellow at the Foundation for Defense of Democracies in Washington. “Most indicators show that an economic crisis is imminent in Turkey. Therefore, Turkey could shortly be in need of a major bailout package from the IMF, for example.”

Coupled with Trump’s tweet and similar threats from Vice President Mike Pence today, the legislation is indicative of an emerging consensus between the executive branch and Congress favoring punitive measures against Turkey.

Despite bipartisan calls to sanction Turkey for its detention of Brunson, the State Department had until now favored postponing punitive measures as it sought to sort out a thorny military standoff between the Turks and US-backed Kurds in Syria’s Manbij.

“Previously you had members of the Senate who were very eager to take an aggressive approach to sanctioning Turkey over a host of issues,” Nicholas Danforth, a senior analyst at the Bipartisan Policy Center’s national security program, told Al-Monitor. “It was the State Department and the administration which was holding them back in the hope that they could negotiate something without resorting to these measures. The fact that so far their approach seems to have failed, that they were not able to secure Brunson’s release, has dramatically strengthened the hand of people who think it’s time to get tough with Turkey.”

Indeed, Corker told Al-Monitor he expects his bill “will be very widely supported” within both Congress and the Trump administration.

It remains unclear, however, if the Senate bill could actually prevent international institutions from carrying out projects in Turkey as other shareholders are entitled to vote on continued financing for Ankara. Turkey is the European aid bank’s largest borrower at roughly $1.8 billion. Ankara also received $927 million in long-term funding commitments last year from the World Bank’s International Finance Corporation.

The bill does contain exemptions for humanitarian and energy diversification projects. The International Finance Corporation has invested around $3 billion in Turkish energy projects to date.

The European aid bank declined to comment on the record. A World Bank spokesperson simply said, “This is a bilateral matter between the United States and Turkey.”

In response to a request for comment, the Turkish Embassy in Washington directed Al-Monitor to a tweet by Turkish Ambassador Serdar Kilic. "It is so unfortunate that the US Authorities failed to hear my explicit advice. … No one should expect Turkey to give in to threats and that as an Ally [the] US should not resort to threats against us,” he wrote.

“Although Pastor Brunson’s transfer from prison to house arrest is a good first step, after 21 months, this development is long past due,” Corker said at today’s vote, at roughly the same time Pence made similar remarks in a speech on religious freedom.

Turkey has also detained and convicted another US citizen, NASA scientist Serkan Golge, on similar charges, in addition to arresting Turkish staffers employed by US consulates.

While the Turkey International Financial Institutions Act is a marked escalation on the part Congress, it follows several other legislative initiatives that have also drawn Ankara’s ire.

Pending annual defense authorization legislation, for example, takes the first step toward kicking Turkey out of the international consortium building the F-35 fighter jet. The bill bars the transfer of F-35s to Ankara until the US Defense Department submits a report assessing the impact of a “significant change” in Turkey’s participation in the program.

Meanwhile, two cosponsors of the Corker bill — Sens. Jeanne Shaheen, D-N.H., and James Lankford, R-Okla. — inserted a provision in pending foreign aid spending legislation that would bar Turkish officials involved in the detention of US citizens from entering the United States.