What prompted Turkey to move US pastor from prison to house arrest?

The United States must determine what best motivates Turkey when it comes to foreign policy and diplomacy: the carrot or the stick. 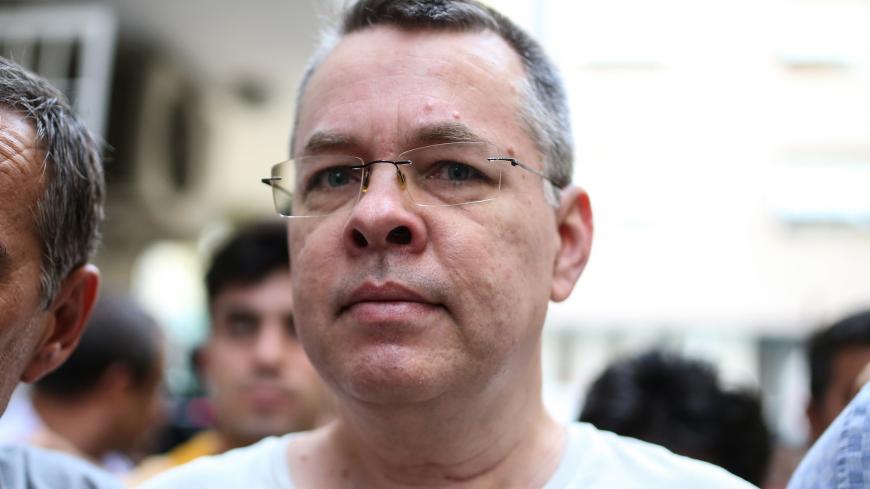 US pastor Andrew Brunson, escorted by Turkish plainclothes police officers, arrives at his house on July 25, 2018, in Izmir, Turkey. - GETTY

A Turkish court abruptly agreed to release US pastor Andrew Brunson from prison July 25, after almost two years, and place him under house arrest instead. The decision comes just a week after the court had refused his request.

How did this happen? Was the court influenced by pressure from Turkish President Recep Tayyip Erdogan or US Secretary of State Mike Pompeo? The threat of sanctions from Congress? Was it US President Donald Trump’s tweets, or perhaps the friendly fist-bump between the two presidents at the NATO summit in Brussels?

The court simply cited health reasons for its decision. It didn’t disclose details, though Brunson is said to suffer from depression. The evangelical pastor from North Carolina, a missionary in Turkey for more than 20 years, was detained in October 2016, not long after the failed coup in July of that year. Erdogan primarily blames US-based Muslim cleric Fethullah Gulen for the coup attempt, which Gulen denies. Brunson is charged with espionage, aiding Gulen and supporting terror organizations. Prosecutors are seeking a prison sentence of 35 years. Brunson denies the charges, and many think his arrest was politically motivated.

Erdogan has long been frustrated by the US refusal to extradite Gulen, repeatedly saying, “Give us the priest and take your pastor,” proposing a swap of Brunson for Gulen.

On July 19, six US senators introduced bipartisan legislation to sanction Turkey financially by cutting off loans from the World Bank, the European Bank for Reconstruction and Development and the International Monetary Fund (IMF). The proposed legislation, called the Turkey International Financial Institutions Act, reiterates US policy to “oppose any effort by a foreign government to detain US citizens for political leverage.” It stands against “arbitrary detention of and denial of freedom of movement to US citizens (including dual citizens) and locally employed staff of the United States mission to Turkey.” It calls for the international financial institutions to oppose any loans or other assistance to Turkey — except for humanitarian causes, or projects designed to decrease Turkey’s dependence on oil from Iran and Russia.

The proposed US sanctions, after several private and public warnings to senior Turkish officials, come as Turkey’s economy is facing serious challenges. Although Erdogan repeatedly brags about his willingness to lend money to the IMF, Turkey ranked No. 2 among recipients of International Finance Corporation funds, with $927 million in new long-term commitments. Turkey’s dependency on this institution is well established. For example, in 2013 the corporation delivered $985 million for various projects in the country. And Turkey ranked No. 1 among European Bank for Reconstruction and Development borrowers in 2017, with about $1.8 billion in new commitments.

In such a precarious economic environment, any talk of sanctions should worry Turkey’s government and public. Yet only a handful of independent media outlets reported about the US legislation. Indeed, the Senate’s webpage where the text was posted could only be accessed in Turkey via a proxy, such as a virtual private network, or VPN. Although social media accounts promptly shared photos of the proposal with prominent journalists, Erdogan did not comment on it, so the pro-government media chose to ignore it.

Given that the United States can erect several short- and medium-term hurdles for Turkey, why doesn’t the Turkish government seem bothered by the potential legislation?

Al-Monitor spoke with a diverse group of academics, senior bureaucrats and lawyers who offered explanations for why the US government’s voice isn’t heard in Turkey.

First: “Does Congress really matter?” This is a line frequently heard in Ankara when people talk about US foreign policy. Ankara’s experience gives it no strong reasons to take Congress seriously under the Trump administration. In October, the United States suspended non-immigrant visas from Turkey after the arrest of a US Consulate employee in Istanbul. Just one month later, the United States started issuing some visas, and by January the ordeal was over. Regardless of whether the visa leverage was appropriate, it was a strong decision — but the United States failed to follow through properly. This told Ankara that it can ride out the waves of uncertainty in foreign policy between the State Department and other agencies in Washington.

Second is Erdogan’s bromance with Trump. The pro-government press cherished the fist-bump at the NATO summit and shared images on TV for days. Ankara sees Trump as the decision-maker, and since the US president hasn't spoken about sanctions, it's not worth the worry.

And though Trump has demanded Brunson’s release several times, that merely signals Ankara that Brunson is worth keeping, to get more from Trump. Also, in the postelection era, Ankara doesn’t need to publicly engage in a war of words with the United States for domestic consumption, so it’s best for Erdogan to simply ignore the chatter from Congress as long as possible.

The last explanation involves pressure Turkey may be feeling regarding its pending deal to buy F-35 fighter jets from the United States. Congress is threatening to hold up the sale because of Turkey’s decision to buy Russian S-400 air and missile defense systems.

That’s why pro-government media in Turkey welcomed US Secretary of Defense James Mattis’ advice to Congress not to delay or nix the sale.

Ankara perceives that rifts within the US government can work out to its benefit, especially when it doesn’t see a strong posture on the US side, and knowing well that congressional powers are limited.

The decision for the pastor’s release from prison to house arrest arrived when Ankara saw the value the US government was putting on the lives of its citizens. Ankara also understood that Brunson’s continued captivity is increasing US scrutiny of Turkish human rights violations. To summarize the opinions of a few sober bureaucrats in Ankara, “Erdogan is pushing the limits of playing hardball with the United States. How long can Turkey resist without Western financial support if these sanctions are enforced?”

The question remains: Is Congress determined to follow through with the stick if rewarding Erdogan fails? If Ankara sees this determination, it will decrease its arbitrary detention of US citizens.