Hopes soar for US pastor's release as Trump fist-bumps Erdogan

The odds look better than ever that American pastor Andrew Brunson will finally be freed from a Turkish prison after President Donald Trump made friendly gestures toward President Recep Tayyip Erdogan in Brussels, but there are no guarantees that Brunson will walk free. 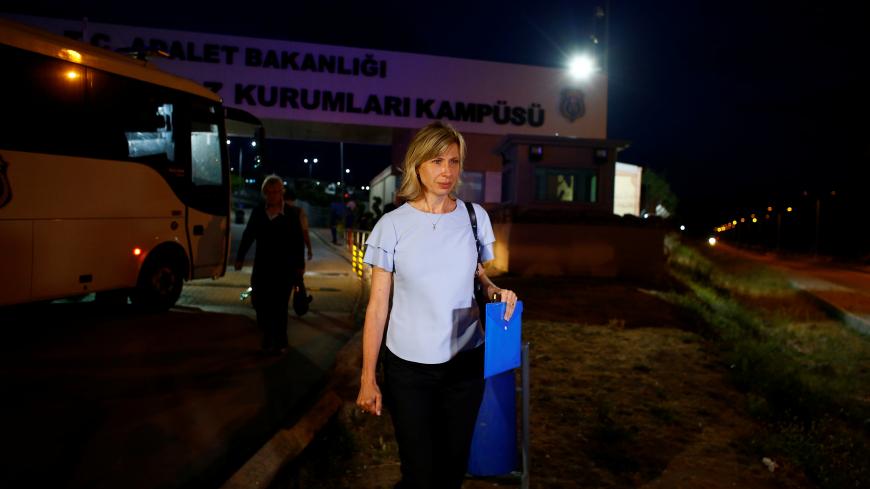 Hopes that Turkey will free a North Carolina pastor who has been held in a Turkish prison on trumped-up terror charges for 21 months are high ahead of his third courtroom hearing on July 18, amid a mix of cajoling and threats from Washington. Andrew Brunson’s release would help ease tensions between the two NATO allies, whose ties have taken a nosedive over US support for Kurdish militants in Syria.

The most immediate cause for optimism is the positive body language displayed by President Donald Trump during his encounter with Turkish President Recep Tayyip Erdogan at last week’s NATO summit in Brussels. The two were all smiles as they were photographed exchanging fist bumps together with French President Emmanuel Macron.

Trump reportedly mouthed, “I like him, I like him” in reference to the Turkish leader. The presidential banter was followed with a July 16 phone call between Trump and Erdogan to discuss the latest developments in Syria, notably the Manbij road map but also Brunson, the pro-government daily Sabah reported. Trump has repeatedly called on Erdogan to free the pastor and took to Twitter to air his views on the case.

Assorted members of Congress have gone further, pressing for sanctions against Turkey in separate bills over the unlawful detention of US citizens and Ankara’s plans to acquire Russian-made S-400 missiles. Washington argues that the Russian system would compromise NATO’s security, and Congress is demanding the Pentagon suspend delivery of F-35 fighter jets to Turkey until the S-400 deal is scrapped. Turkey insists it will buy the Russian hardware because its efforts to acquire the US-built Patriot missiles, in the words of Turkish Foreign Minister Mevlut Cavusoglu, "didn't work."

Brunson, who has served a tiny congregation of Protestants in the western port city of Izmir for more than 20 years, is accused of links to Fethullah Gulen, the Pennsylvania-based cleric Turkey says was responsible for the failed effort to violently overthrow Erdogan in July 2016. Brunson is also supposedly in cahoots with the outlawed Kurdistan Workers Party, the rebel outfit that is fighting the Turkish army for autonomy in the country’s heavily Kurdish southeast provinces. Brunson denies all the charges.

Howard Eissenstat, an associate professor of history and Turkish affairs expert at St. Lawrence University in New York, believes there is good reason to believe Brunson may be released after his third hearing. Eissenstat told Al-Monitor, “More than all the other cases of detained US citizens and consular employees, it is Brunson’s that has focused US attention. It — along with the S-400s — seem to be the core issues for Congress.” Therefore, if Erdogan wants a reboot in US-Turkish ties, Eissenstat noted, “flexibility on these will be required, and obviously Brunson is the much easier one to move on.”

Hopes that Brunson would be freed first emerged when US Sens. Jeanne Shaheen (D-NH) and Lindsey Graham (R-SC) met with Erdogan in Ankara on June 29. They raised his case and that of other US nationals, including NASA physicist Serkan Golge, along with those of three Turkish US consulate employees, all being held on thinly evidenced terror charges. Shaheen together with Sens. Thom Tillis (R-NC), James Lankford (R-OK) and Chris Van Hollen (D-MD) have been at the vanguard of efforts to sanction Turkey.

It remains unclear who initiated the meeting, which was Erdogan’s first with any foreign delegation since being re-elected president. But sources familiar with the substance of the talks told Al-Monitor they went “surprisingly well” with a “health-conscious” Erdogan throwing in advice about healthy living. The senators had “not minced their words” and came away feeling that Erdogan had not been “properly briefed” about the seriousness of the sanctions, but that he “now understood.”

The sources declined to comment on whether Erdogan had pledged to free Brunson. Presidential spokesman Ibrahim Kalin did the bulk of the translating. “It's important to note that [Erdogan] met with the ones tough on him as his first delegation. That says a lot about him and how to deal with him,” one of the sources speaking on condition of strict anonymity told Al-Monitor. “And he was not his usual preaching self. But [the senators] were tough in there and didn’t back down on anything. I think Erdogan appreciated the honesty,” the source added.

Still, there are no guarantees that Brunson will walk free.

Aykan Erdemir, a former opposition member of the Turkish parliament who is currently a senior fellow at the Foundation for Defense of Democracies, noted there are still strong dynamics at work undermining Brunson. “Both the pro-government media and the prosecutor’s office have dug themselves deep in framing Brunson as a terrorist, and it will be a challenge for them to pull a U-turn,” he told Al-Monitor.

Moreover, Erdogan’s nationalist allies “have a proven track record of anti-Christian and anti-missionary prejudice and would not welcome Brunson’s release.”

In any case, the S-400 issue is not going away. Nate Schenkkan, the project director for Nations in Transit at Freedom House who closely follows Turkey, observed, “The sanctions regime under [the Countering America’s Adversaries Through Sanctions Act] is already law and the State Department has been very clear that they will apply it if and when Turkey receives delivery of the system.” Freeing Brunson “may help release a little pressure in Congress, but it will neither assuage strategic concerns over the S-400 nor undo the last several years of perceptions that Turkey is unreliable and undemocratic,” he told Al-Monitor.

The Turkish press claims that Trump is opposed to sanctions against Turkey. Yet should the pastor remain in prison, “I don’t think Trump will make a stand against sanctions,” predicted Eissenstat. “There is too much pressure among evangelicals for his release.”