Turkey’s best-known public intellectual Osman Kavala has been held in pre-trial detention without even an indictment in what his lawyers believe constitutes “torture” and observers say is an attempt to stifle dissent. 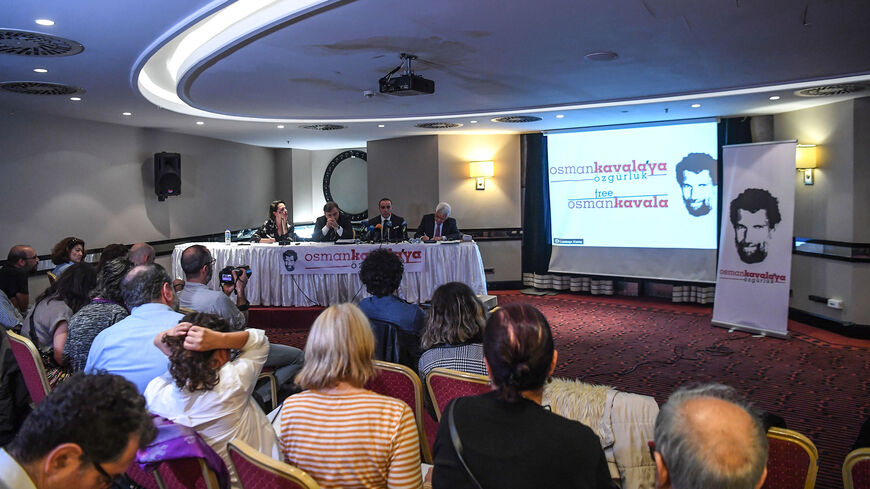 Lawyers for Turkish civil society leader Osman Kavala, jailed a year ago on suspicion of involvement in a failed military coup, broke their silence on Wednesday to call for his release, saying the failure to indict him amounted to “torture.”

Kavala’s case has become another flashpoint in Turkey’s troubled relationship with the West since President Recep Tayyip Erdogan began a far-reaching crackdown against his opponents and civil society in the wake of the military’s attempt to seize power in 2016. More than 50,000 people, including politicians, journalists and rights activists, have been imprisoned.

Kavala, 61, has been held in solitary confinement without any formal indictment or even a deposition by the prosecutor, leaving his lawyers to speculate over what charges he might eventually face. He was formally arrested on suspicion that he supported four distinct “terrorist” groups and sought to topple Turkey’s constitutional order and government.

“We do not know what he is accused of. His basic rights are being violated, and enduring this for a year now amounts to torture,” lawyer Koksal Bayraktar told a news conference. “If there is rule of law in Turkey, then Kavala must be released and appear before a court once the crimes for which he was arrested have been articulated.”

Kavala’s defense team had previously kept a low profile, hoping that the Turkish legal process would work and to avoid making the case an international issue. However, officials in Europe have said Kavala’s plight violates international judicial and human rights standards.

“His current arbitrary detention represents a further blow in the ongoing crackdown against Turkish civil society,” Antonio Panzeri, chairman of the European Parliament’s subcommittee on human rights, said this month. “The Turkish authorities need to ensure that the physical and psychological integrity of all human rights defenders are guaranteed, that the presumption of innocence is respected and that the justice system is independent.”

In June, Kavala applied to the European Court of Human Rights, which agreed in August to expedite the case and is now waiting for the Turkish government to make its defense by Jan. 10.

Kavala’s prolonged detention highlights the state of crisis in the Turkish judiciary, whose wheels have ground to a near halt after more than 4,500 judges and prosecutors were fired after the coup. Critics accuse the government of exerting political control over the justice system.

Erdogan himself singled Kavala out a week after his detention, deriding him as “Turkey’s Soros.” George Soros is a billionaire philanthropist targeted by right-wing extremists in the United States and eastern Europe. “They say he’s an NGO representative … We see him behind efforts to funnel resources to obvious places,” Erdogan told his ruling party in parliament.

The government has used lengthy pre-trial detention periods to suppress political dissent, said Howard Eissenstat, a professor at St. Lawrence University and senior nonresident fellow at the Project on Middle East Democracy. “It has been aimed particularly at journalists and political dissidents, allowing the government to silence those jailed and strike fear into those still working. It flies in the face of any right to a fair and speedy trial,” he told Al-Monitor.

Unable to meet prosecutors or read an indictment, Kavala’s lawyers have been left to piece together the case largely from pro-government media coverage, which has smeared him since his arrest. Those outlets allege his criminal case has been merged with that of Metin Topuz, an employee at the US Consulate in Istanbul who was detained on coup-plotting charges and whose case has helped sour relations between Ankara and Washington. “We can’t access the criminal file, so we are working in abstract darkness,” Bayraktar said.

Kavala has also been accused of “attacking the government” for allegedly organizing a mass demonstration to save Gezi Park from Erdogan’s plans to replace it with a shopping mall in 2013, his lawyers said. Other allegations include support for the movement of the Muslim cleric Fethullah Gulen, who the government says masterminded the coup attempt, as well as Kurdish insurgents and two far-left militant groups.

“I don't think anyone seriously believes that Kavala is guilty of anything more than demonstrating the continued, stubborn vibrancy of civil society in Turkey,” said Eissenstat.“His case is meant to be an example to others — his very prominence is demonstration that nobody is safe. Kavala's continued detention is an important piece of this larger attack on civil society,” he said, pointing to more than 1,000 civil society groups that have been banned since the coup attempt.

The soft-spoken Kavala, the scion of a wealthy family, has spent much of his fortune sponsoring art and culture and promoting dialogue among Turkey’s polarized communities.

Dubbed the “red millionaire” for his left-leaning causes, he has advocated for Turkish reconciliation with both Armenians and Kurds and worked with the government to save Armenian historical sites in Turkey, including Ani, the great medieval capital in eastern Turkey that was inscribed on UNESCO’s World Heritage List in 2016.

“Osman Kavala is not a figure we are used to seeing in our midst. He’s not Kurdish, but he works on the Kurdish problem; he’s not Armenian, but he is involved in Armenian issues,” said lawyer Ilkan Koyuncu. “We just can’t accept that someone, especially someone wealthy, would involve himself in civil society. Because we cannot understand him, we criminalize him.”

Abdulkadir Selvi, a columnist for Hurriyet with close ties to the government, wrote on Oct. 16 that he may find reprieve when Turkey releases a “judicial reform strategy” next month with the hope of currying favor with the EU in its bid to expand a customs union to include more Turkish exports to its biggest trading partner.

Turkey freed American pastor Andrew Brunson this month after imprisoning him two years ago on coup-related charges, and his release was widely seen as an effort by Ankara to mend fences with the United States following threats by President Donald Trump to sanction Turkey over the case.

“Just as Brunson’s release created a chance to turn the crisis in Turkish-American relations into an opportunity, we could seize the same with Osman Kavala in relations with the EU,” Selvi wrote, but added that he did not expect an indictment anytime soon.

Rachel Goshgarian, an associate professor of history at Lafayette College, has worked with Kavala for a decade on projects related to Armenian cultural heritage in Turkey, including on Ani’s architecture. His absence over the past year has deprived Turkish civil society of one of its greatest champions, she told Al-Monitor.

“He has given his life and his energies to making Turkey a place where all of the people who call it home feel comfortable and appreciated,” Goshgarian said. “How someone like him ends up in jail for over a year without any obvious reason seems to me not only totally unfair to him, but to Turkish society.”