Still no charges for Turkey's top philanthropist after year behind bars

Turkish philanthropist and businessman Osman Kavala has spent a year behind bars, but the judiciary has yet to explain why he's still in jail. 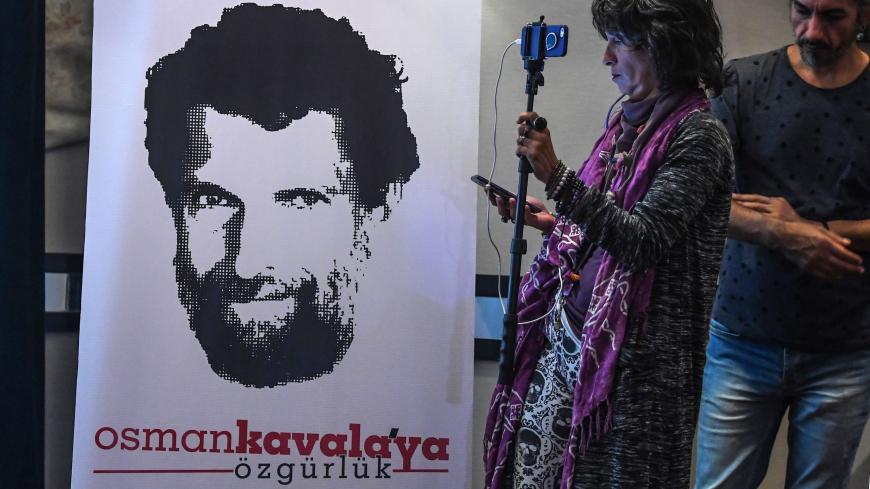 A journalist stands in front of a poster featuring jailed businessman and philanthropist Osman Kavala during a press conference by his lawyers, Oct. 31, 2018. - GETTY/Ozan Kose

For those unfamiliar with why Osman Kavala matters for Turkey, a nutshell description would be that he is a civil society leader and philanthropist who stands out as the most prominent link between Turkish civil society and the outside world. The 61-year-old is also a wealthy businessman.

Kavala chairs Anadolu Kultur (Anatolia Culture), an Istanbul-based foundation that, in its own words, aims “to build bridges between different ethnic, religious and regional groups by sharing culture and art.” For more than a year, however, Kavala has been unable to pursue that mission because he has been locked up in a high-security prison in Silivri, near Istanbul.

Kavala was detained Oct. 18, 2017, aboard the plane he took to Istanbul from the southeastern city of Gaziantep, where he had attended a meeting on a planned joint project with Germany's Goethe Institute. Less than a week later, while Kavala was still in police custody, President Recep Tayyip Erdogan openly accused the activist of criminality and pointed him out as a target of the judiciary. “The connections of the person they call the ‘red Soros of Turkey’ are coming to light,” Erdogan told a parliamentary meeting of his Justice and Development Party. “You see the same person behind the Taksim incidents [the Gezi Park resistance]. You see them behind the transfer of significant funds to certain places.”

After 14 days in police custody, Kavala appeared before a judge Nov. 1, 2017, and the judge ruled to send him to prison pending trial. Ever since, the Kavala case has been shrouded in mystery.

Kavala has been one of the chief Turkish partners of European civic groups and institutions in the field of arts and culture — this is well known. It remains unclear, though, whether he has been caught up in the “hostage diplomacy” tactics since the failed coup attempt on July 15, 2016. And if he indeed is a hostage, what is demanded from whom is also unclear.

The problems of Turkey’s Kurds and Armenians have been high on Anadolu Kultur’s agenda, so keeping Kavala in jail could be seen also as an attempt to intimidate the country’s civil society.

Although Kavala has been in prison for more than a year now, the prosecution has yet to draw up an indictment. Two articles of the Turkish penal code, referenced in the arrest warrant, remain the only hints as to what charges he might face. Article 309 is about “attempting to destroy the constitutional order by force and violence,” and Article 312 is about “attempting to abolish the government or to prevent it from fulfilling its duties.” In both cases, the penalty is life imprisonment.

Judging by the questions Kavala was asked while in police custody and the narrative leaked to the pro-government media, he appears to be accused of links with people allegedly involved in orchestrating the coup attempt.

On Nov. 15, 2017, pro-government papers citing the chief prosecutor’s office claimed that Kavala had had telephone calls totaling 93.5 hours with Henri Barkey, an American Turkey expert who was alleged to be involved in the putsch. According to the story, Kavala used his own phone as well as the phones of his wife, cousin and employees to talk to Barkey.

The pro-government media claimed that Barkey — who happened to be on an island off Istanbul during the coup attempt for a workshop on Iran — was involved in plotting and coordinating the putsch.

There are no phone records to corroborate the alleged phone contacts between Kavala and Barkey, however. The only logical explanation is that while in Istanbul, Barkey’s phone routed to the same cell tower used by Kavala and Anadolu Kultur and that this was considered a connection.

At an Oct. 31 press conference in Istanbul, Kavala’s lawyers said the prosecutor’s office had rejected their request for details on the alleged 93.5-hour conversations on the grounds that the evidence was sealed.

Lawyer Ilkan Koyuncu said they believed a second accusation against Kavala pertained to “financing and organizing” the Gezi Park resistance in spring 2013, which grew into mass anti-government demonstrations across the country; hence the use of Article 312 about “attempts to abolish the government” to justify his arrest. Yet during his interrogation, Kavala was never questioned about “how he financed Gezi, how much money he transferred and to which accounts,” said Deniz Tolga Aytore, another defense attorney.

The only judge Kavala has seen over the past year is the one who ordered his arrest. The activist remains in the dark on what he is really accused of and on whether he will ever be indicted. Because the prosecution has failed to produce an indictment, no trial has started yet. Similarly, his lawyers remain in the dark on what evidence, if any, the prosecution has, since they are denied access to the file.

Kavala's three lawyers said they had filed a total of 30 petitions on 10 occasions to secure their client’s release, but to no avail. On Dec. 29, 2017, the defense team petitioned the Constitutional Court, arguing that Kavala’s arrest violated the European Convention of Human Rights because no strong evidence exists to keep him in jail on suspicion he might escape or destroy evidence. The court has yet to make any move on the appeal, according to the lawyers.

Kavala has a co-suspect in the probe: Metin Topuz, a Turkish employee of the US Consulate in Istanbul who was detained in September 2017 over alleged links with senior police officers, soldiers and prosecutors belonging to a network led by US-based preacher Fethullah Gulen, whose followers Ankara has designated as a terrorist organization and holds responsible for the coup attempt.

Yet Topuz was never mentioned in Kavala’s interrogation and no link could be established between the two, Koyuncu said. The defense therefore has asked that their files be separated.

In a message from prison on the first anniversary of his imprisonment, Kavala said, “I believe that those who have accused me of attempting to overthrow the constitutional order and the government are realizing each passing day that I have nothing to do with such crimes.” He voiced hope that his imprisonment “will contribute to a better comprehension of how this flawed detention regime is harming Turkey’s citizens and its judiciary.”

Koyuncu believes that Kavala’s unique profile is confusing to many in Turkey. “Kavala comes from a wealthy family. He is not Armenian but he takes interest in the Armenian question. He is not Kurdish but he is involved in the Kurdish question,” the lawyer said. “People think, ‘Why would he bother to take culture to Gaziantep when he can just throw parties and work to increase his wealth? He must have a secret agenda.’ Because they don’t understand him, they criminalize him.”

According to Koksal Bayraktar, another attorney for Kavala, the prosecution is struggling to come up with evidence. “No specific evidence has been produced so far. An investigation cannot drag on for a year; this means the prosecutor has no evidence,” he said. “The investigation is failing because they had the ‘culprit’ first and are now trying to link him to a [criminal] act. An unlawful investigation is going on.”

Frustrated that the case file is hidden behind “a smokescreen,” Bayraktar said, “We are like Don Quixote tilting at the windmills. We don’t know what we are struggling against.”