Months after he was acquitted on charges he sought the government’s overthrow with popular protests, Turkish philanthropist Osman Kavala faces life in prison for his alleged involvement in a failed coup. 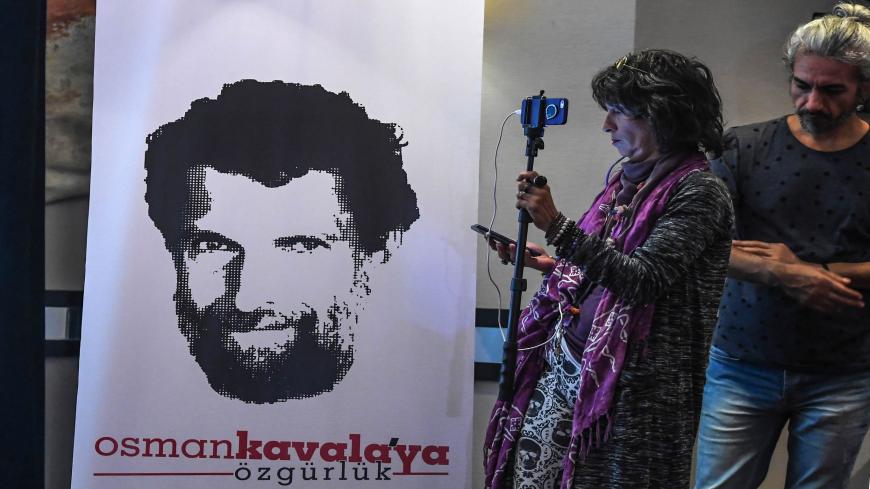 A journalist stands in front of a poster featuring jailed businessman and philanthropist Osman Kavala during a press conference of his lawyers, Turkey, Oct. 31, 2018. - OZAN KOSE/AFP via Getty Images

ISTANBUL — Ayse Bugra, the wife of jailed Turkish civil society leader Osman Kavala, said a new indictment accusing him of involvement in a failed military coup has shaken her belief that he can receive a fair trial and his years-long incarceration has been “torture” for their family.

Kavala, who worked on cultural heritage projects and efforts to reconcile Turks with Kurds and Armenians, has spent almost three years in prison without a conviction. Last week, an Istanbul court accepted an indictment that seeks a life sentence without the possibility of parole for Kavala, who marked his 63rd birthday behind bars this month, and an additional 20 years for espionage.

The fresh charges come eight months after another court acquitted Kavala and eight others after prosecutors failed to prove they tried to overthrow the government during protests to save Istanbul’s Gezi Park from demolition that mushroomed into nationwide anti-government protests in 2013. Within hours of Kavala’s acquittal, prosecutors came up with new charges, pre-empting his release.

Turkey has ignored a European Court of Human Rights order to free Kavala in December, when the Strasbourg court found his lengthy detention was unlawful, and the country’s top court last month indefinitely postponed his appeal against his imprisonment to await the new indictment.

“The problems with Turkey’s judiciary are discussed daily, and I know we are not the only ones who have been subjected to injustice and victimized,” said Bugra, a professor at Bogazici University, at a news conference Oct. 12 with Kavala’s lawyers.

“Unfortunately, it has become very difficult for me to believe that we face an independent judiciary that functions normally. My husband, I and his 94-year-old mother have been subjected to sheer torture.”

The latest indictment — relatively brief, if not succinct, at 63 pages — recycles accusations Kavala faced in the trial over the Gezi protests, which it refers to as the “Gezi Insurrection,” amounting to double jeopardy, said defense lawyer Koksal Bayraktar.

It also seeks life in prison for Henri Barkey, a professor of international relations at Lehigh University. The prosecutor claims Barkey has links with the Central Intelligence Agency and Fethullah Gulen, a Muslim cleric in self-imposed exile in the United States whom Turkey says masterminded the attempted coup in 2016, when more than 300 people died before the revolt was quickly put down.

“The indictment is worse than a joke, it is an embarrassment for Turkey … [that] reduces, if not eliminates, any confidence in the judicial system,” Barkey, who was born in Turkey, told Al-Monitor. “Because I was in Istanbul that night [of the failed coup], I turned out to be a convenient target and they concocted an increasingly elaborate conspiracy.”

The indictment acknowledges that authorities failed to gather enough evidence against Barkey in their investigation of the Gezi protests, but offer that his “actions and activities went beyond normal, drawing attention.”

What the indictment does include are images of a small souvenir bell from Pennsylvania at an Istanbul hotel where Barkey was staying during the abortive coup, noting that Gulen resides in Pennsylvania. There is no evidence the bell was Barkey’s or an explanation of what part it played in the putsch.

Other attempts to corroborate the charges against Barkey and Kavala are their 2016 encounter at a restaurant and cellphone data that showed the two men were in the same Istanbul district several times between 2013 and 2016.

“They could not find instances of Osman and I talking so they extrapolate from the fact that our telephones were in the same large vicinity, as signals were picked up by telephone base stations, to imply we talked. Perhaps another million people were in the same vicinity,” said Barkey.

Kavala’s “misfortune was to be in the restaurant having dinner with Europeans when I came in to have dinner with a friend. We just chatted for a few minutes as two normal people would do,” he said, adding that he and Kavala were not well acquainted. “The reason the indictment comes now is because they wanted to find a way to keep Osman in jail. … Why this government hates Osman so much is something most Turkish watchers cannot figure out.”

The indictment accuses Kavala of establishing ties with officials from foreign countries and nongovernmental organizations “with the claim of expanding so-called democratic freedoms to society’s grassroots when the real aim was to render the democratic, legitimate government dysfunctional, encourage division in society, weaken the unity of our citizens with the state and the nation and to harm our country’s interests in order to benefit foreign states and intelligence agencies.”

Amnesty International called the indictment “absurd." Its Europe director, Nils Muiznieks, said, “Kafkaesque is an overused cliche, but in the case of Osman Kavala, it is chillingly apt.”

Over Kavala’s long detention, President Recep Tayyip Erdogan has accused him of “financing the terrorists in the Gezi events” and of receiving backing from the “famous Hungarian Jew Soros,” referring to the American billionaire George Soros.

Those accusations reveal a deeper suspicion, held by many Turks, that foreign players have fomented unrest in Turkey, said Howard Eissenstat, an associate professor at St. Lawrence University.

“Erdogan probably genuinely believes that the Gezi protests were stimulated by external forces and that Washington was behind the coup attempt,” he told Al-Monitor. “The fact that the evidence in the indictment doesn’t show that does not undermine the basic narrative that foreign influences are behind [those events].”

Eissenstat said political trials in Turkey often lack clear and persuasive indictments. “Turkish prosecutors put these together with all the care of undergraduates pulling all-nighters. They have to answer to Erdogan and the expectation is Turkish courts will be cowed by political pressure, and they don’t actually need a conviction in the end to keep people in prison.”

Lawyer Tolga Aytore described the task of defending Kavala against charges that lack hard evidence as particularly challenging. “They turn the proceedings into soup, then stick a fork in your hand,” he said.

Kavala remains in solitary confinement in a prison outside of Istanbul and is in good health, Aytore also said. “He is persevering, he is quite strong, but like anyone else who is innocent, he is very angry that he has been slandered with charges of spying and treason.”

Bugra said she, too, is angry. “There is no longer an effort being put into the lies. The indictment I read had very little to do with the law, it includes political analysis. It excuses as justifiable the lack of evidence required to establish reasonable suspicion,” she said.