After more than four years behind bars, Osman Kavala was sentenced in a case that rights groups and the opposition call a travesty of justice. 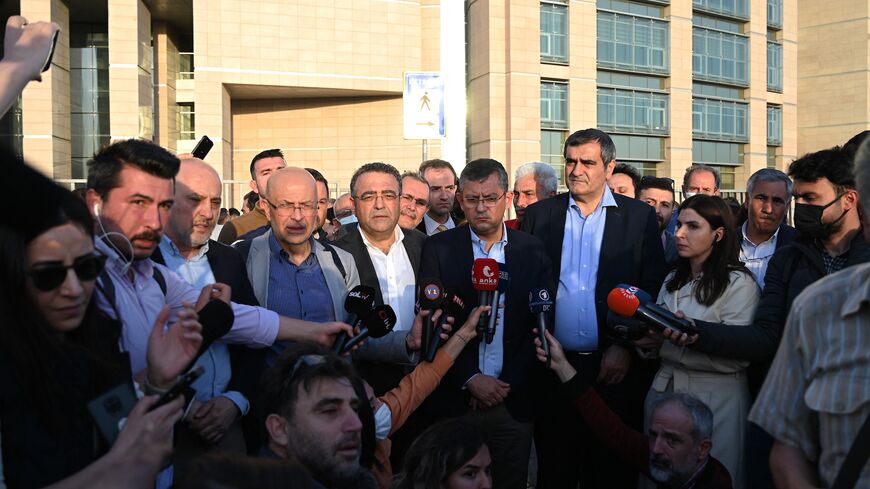 Opposition Republican People's Party (CHP) MPs Ali Seker (CR), Ozgulr Ozel (C) and Sezgin Tanrikulu (CL) speak to the press after the verdict of jailed rights defender Osman Kavala outside the Istanbul courthouse, on April 25, 2022. A Turkish court on April 25, 2022, sentenced Kavala to life in jail without the possibility of parole on highly controversial charges of attempting to topple the government. - OZAN KOSE/Afp/AFP via Getty Images

ISTANBUL — Turkish civil rights activist and philanthropist Osman Kavala was jailed for life without parole on Monday in a long-running case that sparked a diplomatic crisis and highlighted fears for the rule of law.

The 64-year-old, who has been held in prison for 4½ years, was found guilty of attempting to overthrow the government in connection with mass protests that broke out in 2013.

The trial of Henri Barkey, a US-based professor at Lehigh University, and seven other defendants will be continued in a separate case, the court ruled.

Many raised their fists in salute in a show of defiance and promised to continue their struggle. “We will not bow to persecution. We will resist persecution,” said defendant Can Atalay.

Rights groups condemned the outcome of a case they had already criticized as unfounded and unjust.

“Today, we have witnessed a travesty of justice of spectacular proportions,” said Nils Muiznieks, Europe director at Amnesty International, of the “politically motivated charade.”

He added, “The court’s decision defies all logic. The prosecuting authorities have repeatedly failed to provide any evidence that substantiates the baseless charges of attempting to overthrow the government.

“This unjust verdict shows that the Gezi trial was only an attempt to silence independent voices.”

Emma Sinclair-Webb, Europe director at Human Rights Watch, described the conclusion of the “show trial” as “horrifying, cruel and evil.”

Kavala’s high-profile case attracted widespread international attention, turning it into a test of Turkey’s commitment to constitutional principles and the independence of the judiciary from political interference.

The Council of Europe initiated "infringement” proceedings against Turkey in February after Ankara failed to implement a 2019 European Court of Human Rights ruling that called for Kavala’s release. The judgment described the case as politically motivated and designed to silence Kavala, whose civil society work aims to create social reform.

The infringement process could lead to the suspension of Turkey’s voting rights or membership of the 47-country human rights bloc.

Turkey denies the claims and insists its courts are independent. Responding to the Council of Europe, President Recep Tayyip Erdogan has said Turkey would not “recognize those who do not recognize our courts.”

After the verdict, Kati Piri, a Dutch parliament member and former European Parliament rapporteur, led calls for Turkey to be removed from the council.

“No words to describe my anger and sadness over great injustice done by Erdogan and his courts,” she tweeted. “Time for EU countries to take action and kick out Turkey from [the] Council of Europe.”

Ankara had also threatened to expel 10 Western ambassadors, including those of the United States, France and Germany, after they called for Kavala’s release on the fourth anniversary of his imprisonment in October 2021.

The crisis was resolved when the embassies issued a further statement that was interpreted as a stand-down.

Another twist came two years ago when Kavala was acquitted of similar charges related to the Gezi Park protests, which spiraled from an environmental demonstration in Istanbul to nationwide anti-government unrest that remains one of the greatest threats Erdogan has faced in his 20-year rule.

Within hours of his acquittal, Kavala was rearrested on fresh allegations related to the 2016 coup attempt, keeping him in prison. The Gezi acquittal was later overturned and merged with the coup-related charge. An allegation of espionage was also added to the indictment.

He denies all the charges and was acquitted of the spying claim on Monday.

Kavala, whose family moved from Greece to Istanbul in the population exchange of the 1920s, founded Anadolu Kultur, a nonprofit organization focusing on cultural and artistic projects promoting peace and dialogue, in 2002 after stepping back from the family business.

His role in the Open Society Foundations, a civil society network established by Hungarian-American billionaire George Soros, led to Erdogan dubbing Kavala the “red Soros” and accusing him of financing the Gezi protests.

In his final defense statement last week, Kavala repeated his rejection of the allegations.

“The fact that I spent 4½ years of my life in prison is an irreparable loss for me,” he said via videolink from Silivri prison on the outskirts of Istanbul.

“My only consolation is the possibility that my experience will contribute to a better understanding of the acute problems of the judiciary.”

He added, “It is evident that those who issued the indictment did not feel constrained by laws, considering that they will receive political support as they intended to prolong my detention.”

Defense lawyers on Monday noted that one of the judges in the case, in which Erdogan is named as a complainant, had stood as a parliament member for the ruling Justice and Development Party (AKP) in 2018. The court refused a request for him to be recused.

Speaking outside the courthouse, opposition politician Ozgur Ozel said the case showed how the judiciary had fallen under the spell of the president.

“Recep Tayyip Erdogan will be condemned before history. He’ll be held accountable.”