Defendants charged with attempting to topple the Turkish government during mass 2013 protests return to court next week and verdict is expected soon after the prosecutor asked for life sentences for three of the accused. 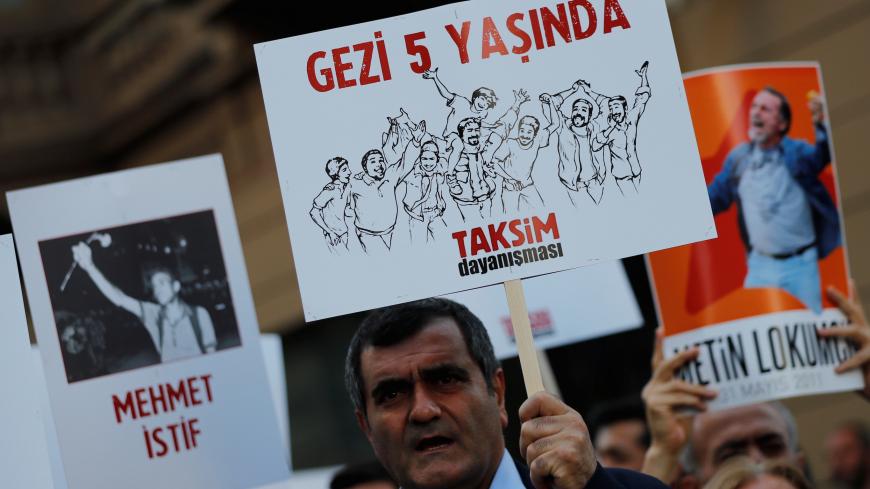 People shout slogans during a demonstration to mark the fifth anniversary of Gezi Park protests, in central Istanbul, Turkey, May 31, 2018. - REUTERS/Murad Sezer

ISTANBUL — Defendants facing lengthy prison sentences for allegedly trying to overthrow the Turkish government with an environmental protest and their supporters said on Tuesday they expect a verdict in the long-running trial soon and accused the government of using the case to criminalize opposition voices.

A prosecutor last week asked the Istanbul court in a formal legal opinion to sentence three of the 16 defendants to solitary confinement for the rest of their lives for allegedly organizing demonstrations in 2013 to save central Istanbul’s Gezi Park, where the government wanted to build a shopping mall. At least eight people were killed in the police crackdown.

Six others, including a filmmaker, lawyer and professor, face up to 20 years in prison for aiding and abetting the alleged wrongdoing, while the prosecutor wants the case files for seven defendants who have fled overseas to now be separated from the main trial. All the defendants are terrorism suspects, he argued.

They deny the charges, contending that the protests against then-Prime Minister Recep Tayyip Erdogan’s government that spread to all but one province in the country was too large and dispersed for any one group or individual to start or stop it.

“Gezi cannot be treated as an uprising or attempted coup, because each citizen [came] of his own will to voice his objections and defend his rights. … It’s not just the names that appear in the indictment, but the millions of people who took to the street to express their democratic rights who are on trial,” Mucella Yapici, a city planner who faces life in prison, said in joint statement at a press conference.

Osman Kavala, a civil society activist, and Yigit Aksakoglu, an early childhood education specialist, are the two others who could be sentenced to life imprisonment. Kavala is the only jailed suspect and on Tuesday spent his 833rd day behind bars, despite a European Court of Human Rights (ECtHR) order in December that Turkey free him due to the absence of evidence of criminal activity. His detention had the “ulterior purpose” of silencing rights activists, the Strasbourg court said.

Kavala and his co-defendants return to court for the next hearing on Feb. 18. Sources close to the matter said the court may allow an additional hearing for final defense arguments but that they believed it remained eager to issue a verdict ahead of March 10, the last day Turkey can file any objections to the ECtHR ruling on Kavala’s detention.

Turkey and other signatories to Europe’s convention on human rights must comply with the ECtHR’s rulings, but the presiding judge has argued it wasn’t legally clear to him that the order was binding and has refused to free Kavala.

If the court were to convict Kavala, it may believe it has rendered the European court decision against his prolonged pretrial detention irrelevant, Emma Sinclair-Webb, Human Rights Watch’s senior Turkey researcher, told Al-Monitor. “There is a dramatic lack of evidence and a lack of willingness to probe the evidence,” she said. “Massive procedural violations have made this an unfair trial.”

At the last hearing in January, defense lawyers stormed out of the courtroom to protest the judges’ refusal to recuse themselves after violating trial rules by allowing a witness for the prosecution to testify without cross-examination or defense lawyers even present.

Lawyers also objected to the court permitting a police officer convicted of killing Ali Ismail Korkmaz, a 19-year-old university student, to join the case as a complainant against the defendants because he had suffered a toe injury while kicking Korkmaz during the Gezi protests.

“The right to a fair trial and right to defense are being restricted,” said Yapici, 68, who was already tried and acquitted in 2015 of charges that she organized the protests.

Judges who have expressed dissenting views over Kavala’s incarceration have been replaced. Erdogan entered the fray after Kavala’s 2017 arrest, accusing him of financing the protests with support from George Soros, the American philanthropist. He has repeatedly depicted the park protests as an effort to push him from power, and these interventions have led observers to doubt the court can retain its independence.

Tayfun Kahraman, who heads the Istanbul municipality’s earthquake risk management department and faces up to 20 years in prison, said the defense had “destroyed” the 657-page indictment and proved that none of them had engaged in a crime at Gezi, but that he still expected a verdict soon and their “democratic struggle awaited harsher times.”

The protests at Gezi were at the time the biggest challenge yet to Erdogan’s Justice and Development Party (AKP), in power since 2002. Since then, Erdogan has expanded his authority, fighting off a military coup in 2016 and winning election to a vastly empowered executive presidency in 2018. Dissent has been largely stifled with thousands of Erdogan’s opponents in prison or in self-imposed exile in a post-coup clampdown.

“What the AKP wants from this case is to intimidate and criminalize the opposition. The legal system has been instrumentalized for this end,” Cevahir Efe Akcelik, head of the Chamber of Environmental Engineers, told the news conference. He is not charged in the case.

Since 2013, Erdogan has occasionally mooted reviving his construction plans for Gezi but has thus far resisted, focusing instead on grander projects. A construction boom has powered Turkey’s economy, which has tripled in size during Erdogan’s tenure but sharply slowed since 2018 and swollen public- and private-sector debt.

“The AKP government has unabashedly based Turkey’s economy on construction [but] it’s a requirement of my job as a city planner to try and protect our natural resources,” Yapici said in an interview. “Now I am being tried on groundless charges that I sought the violent overthrow of the government with a peaceful protest.

“I believe this situation is temporary but something universal [where] global capital is using governments to realize their ends. … Universal solidarity is all that will save the world, and maybe then I will be saved too,” she said.