A Turkish court refuses to free Osman Kavala, who stands accused, along with 15 others, of organizing mass 2013 demonstrations. 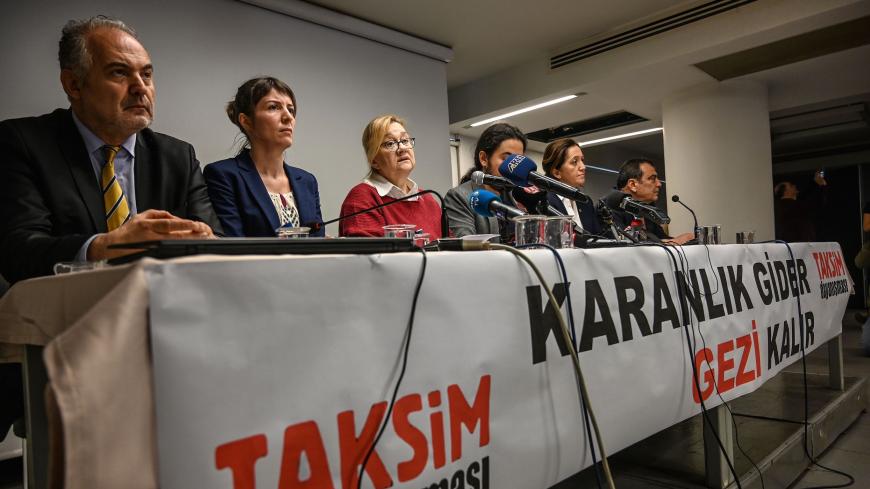 SILIVRI, Turkey — Lawyers for philanthropist Osman Kavala, held in solitary confinement for nearly two years on charges he financed anti-government protests, may skip future hearings in protest, exasperated with what they call a disregard for the law in a politically motivated case.

A court on Tuesday refused to release Kavala, who is spending his 708th day in prison, citing the seriousness of the alleged offenses and his potential flight risk. He is the only suspect in the case imprisoned during the trial, despite facing the same grave allegations as his 15 co-defendants. They face life in prison if convicted on charges of terrorism and seeking the violent overthrow of the government.

Kavala is now set to spend at least another 10 weeks in prison because the court adjourned until Dec. 24. At the hearing, he and eight other defendants were questioned about their efforts in 2013 to save a public park in central Istanbul that mushroomed into the largest anti-government protests in a generation, with 3.5 million people protesting in 80 of Turkey’s 81 provinces. The defendants, who include a filmmaker, educator, architect and city planner, deny the charges, arguing that the spontaneous eruption of anger was too large for any of them to start or stop.

Members of the three-judge panel have been replaced repeatedly, with justices who have expressed the dissenting view to release Kavala removed from the case. The 657-page indictment is based largely on what lawyers said were unlawfully obtained wiretaps of phone calls.

Human rights defenders call the case a “fantasy,” and on Wednesday, the Council of Europe’s human rights commissioner said she was “disappointed” by the decision to keep Kavala in jail, urging Turkey to end the “harassment of civil society.”

President Recep Tayyip Erdogan has accused Kavala of bankrolling the Gezi Park protests with backing from George Soros, the American philanthropist who is at the center of conspiracy theories in Turkey for his support of democratic causes around the world.

“What is being done to Osman Kavala is not just a violation of the law, it is shameful. It is a lynching,” lawyer Tolga Aytore told a press conference on Wednesday. “As his lawyers, we need to consider taking certain measures, including suspending his right to a defense. It could be by not attending the hearings.”

Kavala spent the last two decades protecting cultural heritage sites, fostering dialogue between Turks, Kurds and Armenians, and promoting arts and culture. He has also supported environmental causes and testified that peaceful opposition to Gezi Park’s demolition is protected by free expression clauses in Turkey’s constitution. His office’s proximity to the park meant that he responded to requests for snacks and surgical masks (to mitigate the effects of police teargas) from protesters who were friends.

The session took place in a cavernous courtroom, set within the maximum security penitentiary complex in the town of Silivri, where Kavala is held, some 65 miles from central Istanbul. Opposition members of parliament and more than a dozen diplomats attended as observers.

In a largely cordial exchange, Kavala spent more than an hour on the stand, answering questions about why foreign officials sought out his opinions and how funding for civil society organizations worked. The presiding judge also played a slideshow of photos from the protests and demanded to know if Kavala was in favor of vandalism.

Soros appeared almost as an unindicted co-conspirator in the case. The judge asked several defendants about their ties with the billionaire and questioned Kavala about a claim from Can Paker, a former Open Society chairman in Turkey who is close to Erdogan, that because Soros is Jewish, he opposed the Turkish government, which has poor relations with Israel. Kavala responded that Soros was critical of Israeli Prime Minister Benjamin Netanyahu and denied he had it out for Turkey.

The judge’s line of questioning “exposed how completely empty this whole case is,” Milena Buyum, Amnesty International’s senior campaigner on Turkey, told Al-Monitor after the court adjourned. The authorities “are signaling that if Osman Kavala can be imprisoned, then anybody can be. People get that message, and the fear shows no signs of abetting.”

The case is part of a larger crackdown on civil society in Turkey, where more than 1,000 nongovernmental organizations have been banned since Erdogan fought off a military coup attempt in 2016 and consolidated his power.

Lawyer Ilkan Koyuncu said Kavala’s case was reminiscent of Andrew Brunson’s, an American pastor who was held for two years in Turkey on charges he backed the army’s coup plot against Erdogan before US President Donald Trump pressured Erdogan to release him.

“Unfortunately, we see in cases like this that politics are party to this case,” Koyuncu said. “In Kavala’s case, some people are sending a message, and we believe that’s why he is being targeted.”

Kavala’s wife Ayse Bugra told reporters her faith in Turkey’s judicial system has eroded. “My husband’s mother is more than 90 years old and has been waiting for her son for two years. But there is another saddening aspect,” she said. “What I find difficult is not just that my husband has been deprived of his freedom, but that I now doubt that there is an independent judiciary in Turkey [based on] universal norms of law and justice.”

In his closing testimony, the soft-spoken Kavala told the court he has been incarcerated without “a single shred of concrete evidence that I committed a crime. … Prolonging my detention has become my sentence. I request the court put an end to this illegal and discriminatory treatment and grant my release.”

Minutes later, his plea was denied. Hundreds of his supporters waited quietly to watch Kavala leave the courtroom, but a phalanx of gendarmes surrounded Kavala and refused to remove him until the courtroom was empty. Kavala stood and waved, and the crowd applauded him before obliging the soldiers and silently filing out of the courtroom.