Erdogan trouble continues with US indictment

The US indictment and issue of an arrest warrant for Turkey’s former economy minister has created more setbacks for Ankara, where many believe the ultimate target of the investigation is President Erdogan. 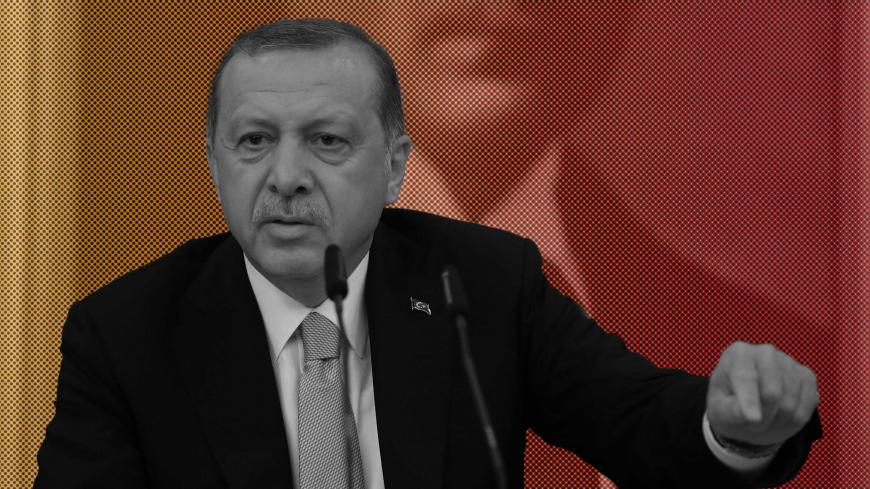 President Recep Tayyip Erdogan’s headaches with the United States are growing rather than decreasing under President Donald Trump’s administration, with serious implications for Ankara’s already tense ties with Washington. The cause of his latest annoyance, however, has nothing to do with Syria or Iraq, where Ankara and Washington remain at loggerheads over key issues.

Erdogan, who is accused of stifling the independence of the judiciary at home in order to consolidate his power, is increasingly up against the independent US judiciary, which last week indicted a minister of his for taking millions of dollars in bribes in order to help Iran circumvent US sanctions.

The case is also expected to cause political complications for Erdogan at home if he can’t find a way to contain developments in the United States that are beyond his control.

Erdogan’s supporters have little doubt who the real target in this case is.

Hurriyet columnist Abdulkadir Selvi, who has close ties within government circles, reported that the indictment of Zafer Caglayan, Erdogan’s economy minister from 2011-2013, has caused “demoralization in Ankara.”

He wrote in his column Sept. 13 that this case pointed to the continuing influence of “anti-Turkish forces” in the United States. “They know that as long as there is Erdogan, they will be unable to carry out an operation against Turkey. Therefore, their only target is Erdogan,” Selvi maintained, expressing a widely held view in official circles.

Caglayan was indicted in a case first opened by Preet Bharara, US attorney for the Southern District of New York, against Reza Zarrab, a Turkish businessman of Iranian-Azeri origin who enjoyed close ties with Erdogan’s ruling Justice and Development Party (AKP).

Zarrab, who was the prime suspect in Bharara’s indictment, was arrested as he tried to enter the United States in Florida with his family in March 2016.

He was charged with engaging in "hundreds of millions of dollars-worth of transactions on behalf of the government of Iran and other Iranian entities, which were barred by US sanctions, laundering the proceeds of those illegal transactions and defrauding several financial institutions by concealing the true nature of these transactions.”

Suleyman Aslan, the former general manager of the Turkish state-owned Halkbank, was also indicted in the United States in connection with this case, leading to alarm in Ankara that new indictments could follow. Hakan Atilla, Aslan's former deputy in Halkbank, is currently under arrest in the United States, standing trial with Zarrab

Caglayan and Zarrab also faced corruption accusations in Turkey in 2013, together with three other government ministers.

Statements by Turkish government officials show that the initial belief that Donald Trump’s presidency would be good for Erdogan and Turkey were misplaced. To the contrary, the mood against Erdogan in the United States turned uglier after his bodyguards beat pro-Kurdish demonstrators outside the Turkish Embassy during his visit to Washington in May.

The mood against Erdogan in the United States turned uglier after his bodyguards beat pro-Kurdish demonstrators outside the Turkish Embassy.

Nineteen members of Erdogan’s security team have since been indicted and face arrest if they enter the United States.

The dismissal of Bharara by Trump momentarily raised hopes in Ankara that this case against Zarrab and Aslan would be dropped. Meanwhile, Ankara hired the services of former New York City Mayor Rudolph Giuliani in its effort to try and broker a deal with the Trump administration to have this case thrown out.

This effort, however, has not succeeded and may even have backfired, given the outcry in the US Congress against Erdogan after the violent display of his bodyguards on US soil.

Calling on the US court “to review its charges” against Caglayan, Erdogan argued Sept. 8 that this was a politically motivated case against the Turkish Republic.

“There are very peculiar smells coming from this issue,” Erdogan told reporters before flying to Kazakhstan for an official visit. He referred to this case as “illogical.”

Erdogan also emphasized that Turkey was not bound by US sanctions against Iran and said he would bring the matter up during his visit to the United States later this month when he is due to travel to New York for UN General Assembly meetings.

“You may be a big nation … but being a just nation requires the legal system to work fairly,” he said, referring to the United States. While referring to the sanctions against Iran, he made no mention of the bribery charges in Caglayan’s indictment.

Meanwhile, the uncertainty around the question of whether Erdogan will meet Trump in New York gained clarity after Erdogan held a phone conversation with Trump while in Kazakhstan. The two are scheduled to meet on the sidelines of the UN General Assembly session.

Murat Yetkin, editor-in-chief of the English-language Hurriyet Daily News and a columnist for Hurriyet, believes there is not much Trump can do to please Erdogan at this stage. He referred in an article to the mistaken belief in AKP circles that Turkey’s current problems in Washington are being caused by leftovers from the former administration.

“The Trump administration is in a very difficult and lonely position today, and supporting Turkey and Erdogan at any cost is not one of his [Trump's] priorities,” Yetkin wrote in Hurriyet.

The main opposition Republican People's Party (CHP), for its part, is not convinced by Erdogan’s argument that this is a political case against Turkey. Yurter Ozcan, the CHP’s representative in Washington who is following the case closely, told the Turkish media that this was a purely legal case.

“US Treasury officials have repeatedly warned Halkbank since 2013, but could not get through,” Ozcan told a private Turkish channel.

He also pointed to the 2015 case against BNP Paribas, the international banking group that had to pay $9 billion in fines for circumventing sanctions, and indicated that Halkbank could face a similar situation.

Ozcan also expects the number of those indicted in this case to increase in the coming period.

Ankara, however, insists that this case involves a conspiracy that includes supporters of Fethullah Gulen, the Turkish cleric residing in the United States who is accused of masterminding last year's failed coup attempt against Erdogan.

In December 2013, Gulen supporters in the Turkish judiciary were accused by Erdogan and the AKP of starting the corruption probes against Zarrab and Caglayan, as well as former EU Minister Egemen Bagis, Interior Minister Muammer Guler and Urban Planning Minister Erdogan Bayraktar, with the aim of toppling the government. Erdogan’s son Bilal was also mentioned in connection with these charges.

All of the charges were subsequently dropped under pressure from the government on the grounds that they had been fabricated by anti-government elements. Opposition parties and papers continue to say this was a major cover-up operation aimed ultimately at protecting Erdogan.

The purge of thousands of suspected Gulen supporters continues across the board today, over a year after the failed coup attempt.

Deputy Prime Minister Bekir Bozdag said the indictment against Caglayan in the United States was tantamount to another coup attempt against Erdogan spearheaded by Gulen supporters.

Nedim Sener, an award-winning investigative reporter who served a prison sentence for his reporting on official conspiracies while Erdogan was prime minister, is among those who believe the ultimate target of this case is Erdogan.

He argued in an article for daily Posta that if the government ministers and their associates, including Caglayan and Zarrab, had been held to account for their crimes in Turkey at the time instead of receiving official protection, matters between Ankara and Washington would have been different today.