The CEO of Halkbank, which has been under scrutiny for bypassing US-EU sanctions on Iran, is at the center of bribery and corruption upheaval rattling Turkey. 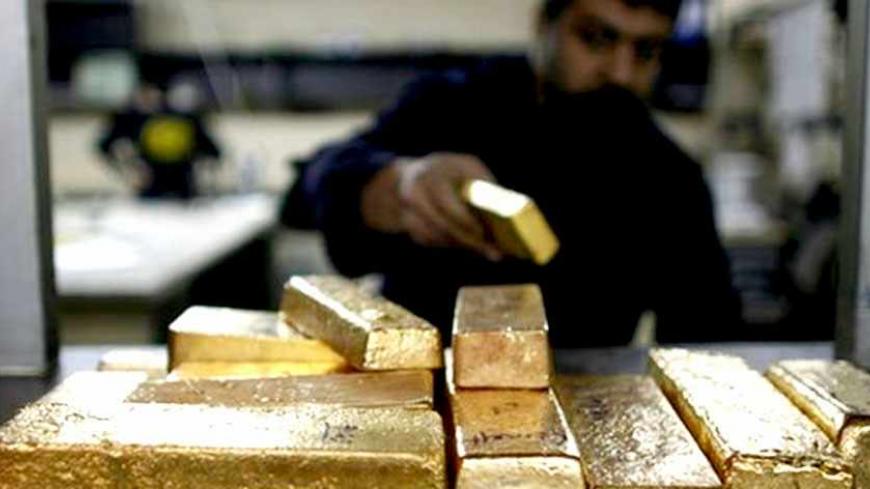 It is difficult to predict how the bribery/corruption investigation into several Turkish ministers will end. Although there are those who frame the event as a power struggle between the Fethullah Gulen movement and the government, conspiracy theories expand its dimensions to include the United States and Iran. With the detentions of Suleyman Aslan, CEO of Halkbank, and Riza Sarraf, an Iranian businessman who deals with gold and was originally named Reza Zarrab, the focus is now on the Iran-Halkbank-gold triangle.

The government is looking for US and Israeli hands in the operation because of the use of Halkbank to circumvent the sanctions imposed on Iran. Prosecution sources stress that the investigation is aimed not at Halkbank but its CEO, after a search of his house yielded $4.5 million hidden in shoeboxes. But the arrival in Turkey of David Cohen, the US Treasury's undersecretary of terrorism and financial intelligence, shows the importance of the Sarraf-Halkbank file in the affair.

Since Iran was banned from using the international money-transfer system SWIFT as of March 2012 as stipulated by US-EU embargoes, there have been many media reports that Tehran has been using Turkey’s Halkbank to evade the restriction.

According to reports the police have delivered to prosecutors, this is how the plan worked: A system was hatched to bypass SWIFT queries by setting up front companies in China. Then, money was transferred from Iran with falsified documents to bank accounts opened in the names of those companies in the guise of reimbursements for imports from China. The money was immediately transferred to the accounts of real or front companies in Turkey as payment for exports, and used to purchase gold. The gold was then sent via couriers to Iran, or to Dubai to be forwarded to Iran.

According to economist Ugur Gurses, this complex system arose to address Turkey’s inability to pay Iran through routine channels for the oil and natural gas it was buying.

This is why Turkey opened an account for Iran at Halkbank. Iran converted the deposits in these accounts to gold. Gold procured from international markets was first brought to Turkey and then sent to Iran. As the intermediary company was registered in Turkey, Turkey’s gold imports and exports rose steadily as Turkey paid its debts to Iran. In three years, $8 billion worth of gold was sent to Iran.

To counter this scheme, the United States banned gold exports to Iran in July 2013. This resulted in the accumulation of nearly $13 billion in imported gold in Turkey.

Gurses' narrative found its way to the investigation files, along with reports from wiretapping and other surveillance. The government, trying to defend itself, opted to label the operation as an anti-Halkbank campaign.

Star, which acts as a mouthpiece for the Justice and Development Party (AKP) government, had this comment: "Attacks against Halkbank are generally originating from the United States. Last year’s $6.5 billion worth of gold exports to Iran had also upset the US government, which had asked the bank to cease gold trade with Iran. Also, India’s decision to use Halkbank to transfer its reimbursements bothered Western countries, as India now owes Iran $5.3 billion in oil debt. India is planning to pay Iran $1 billion per month — that is $12 billion annually — also through Halkbank.”

Percentage to the minister

Ostensibly, it was the bribery case that prompted the investigation into the scheme with Iran. According to police findings, Zarrab, who assumed the name of Riza Sarraf after becoming a Turkish citizen, has close links to Iran. After developing a web of relationships with ministers and their sons, he designed a system to funnel billions of dollars. Sarraf’s father had connections with former Iranian President Mahmoud Ahmedinejad. Sarraf was paying thousands in "commission" — bribes — to Minister of Economy Zafer Caglayan. Caglayan was paid 103 million lira ($49 million), and Aslan 16 million lira ($7.7 million), over two years. Caglayan, who wanted to inflate national export figures, wanted Sarraf to make the transfers in gold. At their Oct. 3 meeting, Caglayan told Sarraf, "You have to export at least $4 billion of gold before the end of the year.” The police investigation file says, “It was understood that Sarraf was trying to boost export figures in line with the demands of [Prime Minister Recep] Tayyip Erdogan, Zafer Caglayan and Suleyman Aslan,” noting that exports were also made to Dubai.

Not easy without the prime minister’s approval

Oktay Ozdabakoglu, Radikal's finance and capital market expert, made this assessment to Al-Monitor: "At the core of the operation are the transactions made by Sarraf. It is claimed that Sarraf and his team, in a system they developed to circumvent black money and SWIFT queries asked in banking transactions as required by the embargo applied to Iran, were transferring the money of certain Iranians from Iranian banks and sending it back to Iran as gold. In this complicated process, they were actually killing three birds with one stone. While Sarraf and his cohorts were collecting their cuts, Turkey’s exports were increasing. Iran, supposedly under embargo, was continuing its trading, and meeting its hot money needs. A public bank was playing the key role in finalizing these transactions. It appears impossible that this operation could have been conducted without the permission or information of the government or quarters close to the government."

The rise of Sarraf, who worked for Al Nafees Exchange and Al Salam Center Exchange in Dubai before entering the Turkish market in 2008, boggles the mind. It is impossible to achieve such a stunning growth without political and bureaucratic backing. Sarraf, who set up Royal Maritime in 2008, went into the gold business in 2011, and in 2012 entered the market with Safir Gold Company. In 2012, that company broke all records by singlehandedly realizing 46% of all Turkish gold exports. Although his men were caught several times at airports with gold and nobody touched them, he came under the scrutiny of the Financial Crimes Investigation Board. The Sarraf file found its way to the judiciary when the government’s former partner, the Gulen movement, pressed the button in anger over the government’s decision to close down private tutoring halls it operated for students.

The file built by police and prosecutors believed to be affiliated with the Gulen movement, which constitutes the base of this kamikaze attack, will not only shake the government. It has the potential to cause major damage to Turkey's relations with the United States, already shaken by divergences over Israel and Syria.