The arrest of the vice president for Turkey’s state-owned Halkbank in New York has stunned Ankara and when the shock wears off, it will likely have complex implications for US-Turkish relations. 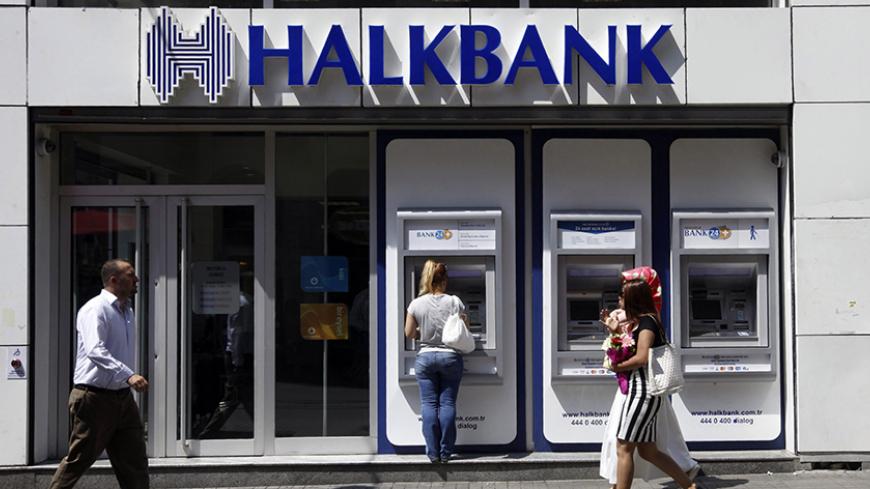 A customer uses an automated teller machine at a branch of Halkbank in Istanbul, Aug. 15, 2014. - REUTERS/Osman Orsal

On the orders of the acting US attorney for the Southern District of New York, Joon H. Kim, FBI agents arrested Mehmet Hakan Atilla, Halkbank’s vice president for international banking, for violating the US-led sanctions against Iran. The press release from Kim’s office accused Atilla with participating “in a years-long scheme to violate American sanctions laws by helping Reza Zarrab, a major gold trader, use U.S. financial institutions to engage in prohibited financial transactions that illegally funneled millions of dollars to Iran.”

Zarrab, a Turkish citizen of Azeri Iranian background who himself is currently in US custody, entered the spotlight in December 2013, when he was arrested for bribing high-ranking Cabinet ministers from Turkey’s ruling Justice and Development Party (AKP). The scandal erupted with the arrest of several AKP ministers’ sons by police officers and prosecutors suspected to be linked to US-based Turkish cleric Fethullah Gulen. Meanwhile, compromising phone conversations involving various AKP personalities, including then-AKP Chairman and Prime Minister Recep Tayyip Erdogan, appeared online. The corruption and eavesdropping scandal led to a fallout between Gulen and Erdogan, who had enjoyed an alliance against Turkey’s secular old guard from 2002 until 2013.

Prior to reaching notoriety, Zarrab allegedly acted as the go-between for Turkey and Iran when Washington maintained a nearly watertight sanctions regime against Tehran over its nuclear program. (It is worth noting that an Al-Monitor story translated from the Turkish daily Milliyet in September 2012 — some 15 months before Zarrab’s arrest in Turkey — identifies him as a “leading name” in the gold-for-oil scheme.)

The sanctions regime, which intensified from 2010 to 2016, involved such technical matters as denying Iranian banks access to SWIFT, the world’s leading international financial transfer system, and barring Iranian oil tankers from purchasing insurance policies. In this context, Ankara bought oil and natural gas from Tehran in exchange for gold bullion, which is much harder to trace than electronic money transfers. As Al-Monitor’s Fehim Tastekin reported in December 2013, Halkbank played a key role in the so-called “gold-for-gas” trade between Turkey and Iran.

Atilla’s arrest is likely to trouble the already problematic ties between the United States and Turkey. On March 19, 2016, US officials arrested Zarrab in Miami for violating the Iran sanctions. Because of Zarrab’s connections to the AKP, Turkish officials lashed out against the United States, describing his arrest as “sick behavior” and “strategic animosity” against Erdogan and Turkey. Some media outlets even claimed that Preet Bharara, the US attorney for the Southern District of New York who had overseen Zarrab’s arrest, was connected to the Gulenist network that many Turks refer to as the Fethullah Gulen Terror Organization, or FETO. The problem got so serious that according to Hurriyet’s Washington correspondent Tolga Tanis, Erdogan put serious pressure on US Vice President Joe Biden to have Zarrab released when they met in New York in September 2016.

Although they have remained quiet so far, Erdogan and the AKP will likely interpret Atilla’s arrest in the same vein as Zarrab’s situation and accuse Washington of engaging in hostile behavior against Turkey. US-Turkey relations are bound to get more complicated on the eve of US Secretary of State Rex Tillerson’s visit to Turkey set for March 30.