What you should know about Turkey's AKP-Gulen conflict

The recent AKP-Gulen split in Turkey has surprised many in the country and turned old allies into enemies. 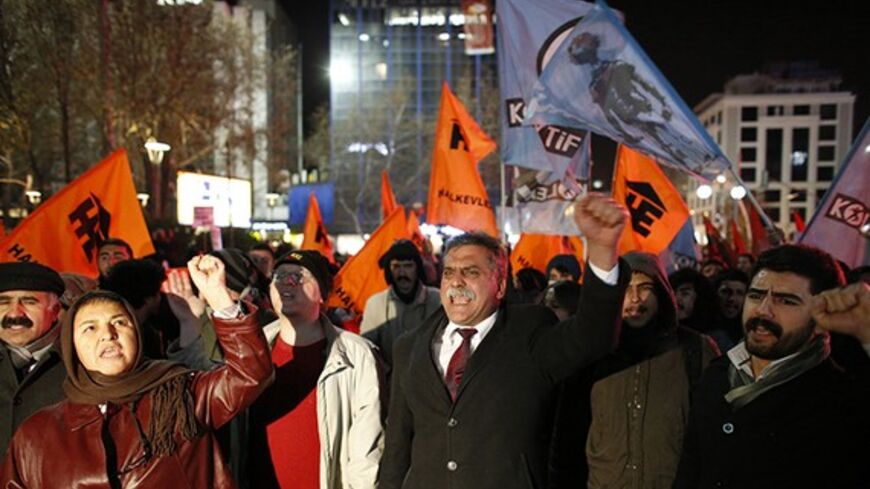 The political tension, if not “war,” between the ruling Justice and Development Party (AKP) and the Islamic community led by Fethullah Gulen, is currently the hottest topic in Turkey. Most foreigners, however, have a hard time understanding the exact nature of this peculiar battle, which is even too confusing for Turks themselves. Here are some basic guidelines to understanding the conflict.

Are they not all conservative Sunni Muslims?

Yes, they are. Prime Minister Recep Tayyip Erdogan, Islamic scholar Gulen and both their followers are pious Muslims who come from Turkey’s mainstream Sunni (Hanafi) Islam. No wonder they used to be allies against Turkey’s authoritarian secularists. No wonder they both use religious references these days in their arguments.

There are some differences though. The core of the AKP comes from the “National View” (Milli Gorus) tradition, which can be best defined as Turkey’s version of political Islam with anti-Western and pan-Islamic tones. Although the AKP explicitly abandoned this ideology during its founding more than a decade ago, most observers think Erdogan is gradually reverting back to the “National View” in the past few years.

The Gulen movement, however, comes from the tradition of Islamic scholar Said Nursi (1878-1960), who focused on faith and morality rather than politics, and whose followers generally shied away from political Islam. Hence, Gulen's followers never voted for Gorus and opted for center-right parties. Some scholars have thus defined the Gulen movement as “cultural Islam” as opposed to political Islam.

Why are they in conflict?

Had the Gulen movement been limited only to cultural Islam, this current tension would be limited. Most observers agree that the movement in fact has its own version of a political effort: aiming for members to obtain jobs within the judiciary and the police. Apparently, this began back in the '70s as an effort to transform a hostile state — Turkey’s draconian secular regime — by gradually joining its ranks. Since it has been a covert task, it has always been a matter of speculation and a source for conspiracy theories.

When the AKP came to power in 2002 and soon found itself targeted by the old secular guard, the Gulen followers within the police and the judiciary emerged as a natural ally. Thus Erdogan, it is often said, empowered these fellow conservatives against their secularist rivals. However, once the old establishment was decisively defeated, sometime around 2010 to 2011, disagreements emerged between the AKP and the Gulen movement. The first breaking point was the so-called “MIT (Turkish National Intelligence Organization) crisis.”

In February 2012, MIT head Hakan Fidan, a confidant of Erdogan, was called by an Istanbul prosecutor to testify as part of an investigation into the Kurdistan Workers Party (PKK). This was, as The New York Times then reported, “the latest round in a power struggle between the country’s security forces and its intelligence agency.” It was also widely interpreted as a power struggle between pro-Gulen police/judiciary and the AKP.  Since then, Erdogan’s supporters complain of a “parallel state” within the state, which allegedly acts according its own internal hierarchy and uses state power for its own purposes.

Why did things escalate in the past two months?

Since the “MIT crisis” of February 2012, the AKP-Gulen movement relations have been silently sour. But in mid-November 2013, all hell broke lose when Erdogan planned to close down “prep schools,” or weekend courses that prepare high school students for university exams. Since about a quarter of these schools are operated by the Gulen movement, and are a source of both finance and recruitment, the movement perceived this move as an attack. The pro-Gulen media opposed the government’s “attack on private enterprise.” The government responded with harsh statements, and the war of words was soon declared an “open war.”

This battle between “an increasingly authoritarian political leadership and its ever more nervous rival,” as described by Al-Monitor columnist Yasemin Congar, took a new turn on Dec. 16, when Hakan Sukur, a football star turned parliamentarian, resigned from the AKP. Sukur, who heavily criticized the government upon resignation, is a proud follower of Gulen, and his entry into the parliament in 2011 was seen as a sign of a marriage between the movement and the party. His resignation signaled a divorce.

The next morning, the real bomb went off: Zekeriya Oz, an Istanbul prosecutor who is widely believed to be a member of the Gulen movement, initiated an early morning raid on dozens of individuals, including the sons of three ministers, an AKP mayor, businessmen and bureaucrats. Millions of dollars stacked in shoeboxes were exposed to the press, underlining that this is the greatest corruption scandal in recent Turkish history. Over eight days, the four ministers who were accused resigned. One of them, Erdogan Bayraktar, shocked the country by saying Erdogan should resign too.

Since the beginning of this corruption probe, two opposing narratives are competing. The pro-AKP camp openly blames the Gulen movement, or at least its “parallel state,” of trying to bring down the AKP government through the corruption probe. In their eyes, this is a “coup effort” by seemingly legal means. The pro-Gulen media and some others, in return, blame the government for trying to hide its widespread corruption by resorting to conspiracy theories and blocking the judiciary’s right to investigate the government.

How are Iran and Israel involved?

At the heart of the corruption scandal is Turkey’s gold-for-oil trade with Iran. According to the claims, Turkey made this deal in order to bypass US-EU sanctions on Iran, and Turkish state-owned Halkbank acted as the main agent of the money transfer, in a complex web explained well in Al-Monitor. No wonder one of the suspects in custody is Suleyman Aslan, CEO of Halkbank, in whose home millions of dollars were allegedly found in the now-famous shoeboxes. Another prominent suspect is Riza Sarraf, a wealthy Iranian businessman who deals with gold and was originally named Reza Zarrab. He is accused of having given bribes to prominent politicians.

In response, the pro-AKP media imply that the covert trade with Iran was merely for Turkish national interests, and the money in personal homes would be used for charitable purposes such as building schools. Moreover, according to the same media, the real culprit behind this “coup” effort is Israel. The reasoning is that the biggest enemy of Iran, and Iranian-Turkish ties, is Israel and its US lobby, so these powers must be behind the corruption probe. The fact that the Gulen movement has carefully avoided joining the anti-Israeli sentiment within Turkey’s Islamic circles (including Gulen’s much discussed opposition to the Gaza Flotilla of 2010) is taken as evidence for the Israeli conspiracy. Pro-AKP media are full of articles these days that depict the Gulen movement as the fifth column or the Trojan Horse of “Zionism.”

Who do ‘the liberals’ support?

Well, it depends. Many liberals had tired with the AKP long before, or at least during, the Gezi Park protests of last summer. So, most of these liberals support the corruption probe, and thus appear to be in a political alliance with the Gulen movement. There are other liberals, however, who still support the AKP based on the importance they attach to the peace process between the government and the PKK. This second group of liberals is also quite suspicious about the “parallel state” — a euphemism for the Gulen movement in the judiciary and police — and warns about its hawkish and “anti-peace” stance with regard to the PKK.

Meanwhile, most other Islamic groups (none of them as big and prominent as the Gulen movement) are united behind Erdogan. Secularists are in shock and are weeping for what happened to the secular republic at the hands of two opposing Islamic cliques.

Only God knows. Plus, it is hard to tell what “winning” means. The Gulen movement is not a political party, and there is no other political party that it will be totally comfortable with. That is why some speculate that the movement is not anti-AKP but merely anti-Erdogan, and that it hopes for a post-Erdogan and less assertive AKP.

Whoever wins, the victory can only be Pyrrhic. If Erdogan crushes the Gulen movement by any means, as some speculate these days, he will lose many votes and further diminish his democratic credentials. If the Gulen movement wins, it will only be proclaiming that it has a lot of power within the state, which will harm its reputation of being a moderate expression of “cultural Islam.” Meanwhile, Turkey’s political and economic stability will suffer, not to mention its rule of law and societal peace.

This is a war without any winners, in other words. But aren’t those wars precisely the ones that are fought most passionately?