The government hunt for police chiefs accused of affiliation with the Gulen Movement's "parallel state" has widened and may turn into a nationwide witch hunt. 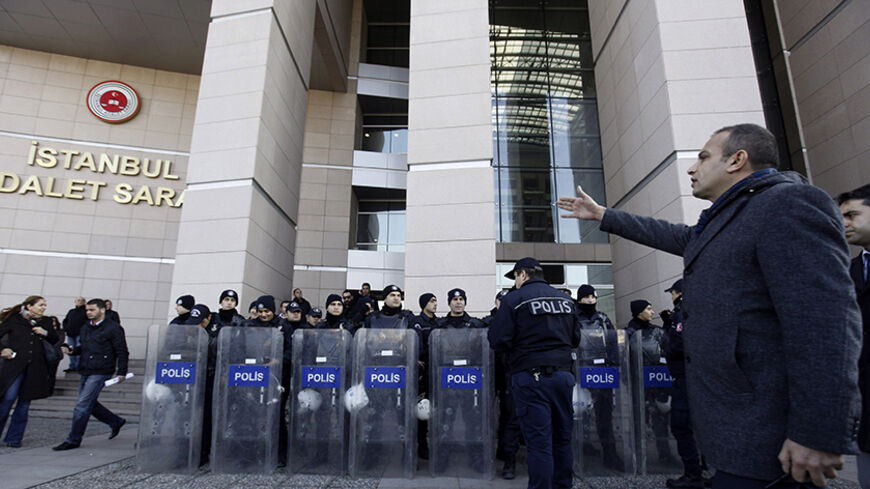 A plainclothes police officer reacts as riot police stand guard in front of the courthouse in Istanbul, Dec. 20, 2013. - REUTERS/Osman Orsal

On the morning of July 22, at 3 a.m., 14 prominent Turkish police officers were rounded up from their residences by other police officers. They were accused of illegal wiretapping of politicians and bureaucrats, including Prime Minister Recep Tayyip Erdogan and the head of the National Intelligence Agency (MIT), Hakan Fidan. Erdogan, who openly supported the purge, said that this was “only a beginning.” Three days later, six of the detained were released, the other eight were put into jail for investigations while detained.

This is the latest round, so far, in the passionate political battle that has haunted Turkey since December, when a “corruption investigation” led four ministers to resign and shook the image of the government. Erdogan argued that the whole investigation was a sham and a conspiracy cooked up by the “parallel state” formed by his former allies, the Islamic community led by Fethullah Gulen. This “parallel state” allegedly was a network of police and prosecutors who were acting on behalf of the ideology and purposes of the Gulen community, rather than the legal hierarchy of the state. The detained policemen are accused by Erdogan’s supporters of being a part of this covert network.

Debate in Turkey about “the parallel state,” albeit under different labels, existed long before Erdogan declared it public enemy No. 1. Various journalists had brought similar accusations about the Gulen Movement network in the judiciary and the police, especially during the controversial “coup cases” that began in 2008 with the probe of “Ergenekon” — an alleged network of officers and civilians who were blamed for a military coup scheme. Another case known as “Sledgehammer” soon followed in 2010, which put nearly 300 military officers in jail for another alleged coup plan. In the same era, 2008-2012, dozens of journalists were also jailed — one of them, Ahmet Sik, right after writing a book on the very topic of Gulen Movement within the police.

The big difference in that, in the 2008-2012 era, Erdogan saw this so-called “parallel state” not as a threat, but as an ally. Then the military and its secularist allies were seen as the common enemy of all religious conservatives, whether they were pro-Erdogan or pro-Gulen. Once this common enemy was defeated, though, the partnership between old allies collapsed and gradually turned into a bitter dispute.

It is no wonder, therefore, that among the police chiefs arrested July 22, Ali Fuat Yilmazer, the former chief of the Istanbul Police Intelligence Bureau, was once very close to Erdogan. Yilmazer even argued on a recent TV show that they were doing every operation with Erdogan’s knowledge. Erdogan denied this.

It should be also noted that the arrested police officers and their supporters (some of whom are obviously members of the Gulen Movement), explain their arrests as punishment, not for any real wrongdoing, but because they exposed corruption among governing circles. One of the detained policemen, Hayati Basdag, former deputy chief of the Istanbul Police Intelligence Bureau, raised his handcuffed hands to cameras and announced, “I have not taken any haram [forbidden] bite.” (The term “forbidden bite” is a common Turkish expression for theft or corruption.) His photo became an instant hit, showing up as avatars on social media.

Whatever the reality is regarding the “parallel state,” it seems likely that this police operation in indeed “only the beginning,” as Erdogan said. One may expect further arrests of police officers, and it will be hard to figure out whether they are targeted for real misdeeds, such as illegal wiretapping, or for exposing the misdeeds of the government, such as corruption.

Yet the police force is not the only target of the hunt for the “parallel state.” An even more important branch of the state is the judiciary, in which the Gulen Movement is also suspected of having many partisans. So Erdogan will probably orchestrate an operation against judges and prosecutors he deems as “parallel,” too. But this will be a more difficult and complicated task, because of the laws that protect the judiciary, and the difficulty of presenting any evidence regarding the alleged bias of the judicial class.

In the meantime, for outside observers, it will be impossible to know whether a policeman, a prosecutor or a judge will be targeted because he is really a member of the “parallel state,” or whether he simply displeased the government. Therefore, if successful, the witch hunt for the “parallel state” can end up by transforming the whole Turkish state into a “party state,” totally dominated by Erdogan’s governing Justice and Development Party (AKP).

The most worrisome part of this hunt on the “parallel state” is that it actually goes beyond the state and targets society itself. The messages coming from the AKP camp indicate that not only the Gulen Movement members within the bureaucracy, but the whole Gulen Movement itself, with all its civil society presence, is the target.

Not long ago, the head of the AKP organization in Sakarya, a city east of Istanbul, proudly announced: “No parallelist will be allowed to exist here. It is impossible for them to live and have any trade here. … The first thing we did was to get rid of their hostels [whose buildings] belonged to the municipality. Citizens will not welcome them to their homes either.”

What such words, and many similar ones on social media, suggest is that the hunt for the “parallel state,” whatever its reality is, is very likely to turn into a witch hunt on the whole Gulen Movement. And this means that Erdogan’s “New Turkey,” instead of being the free, equal country in which every citizen feels at home, might become another version of the old paranoid Turkey — only with a new definition of “the enemy within.”