The ruling Justice and Development Party (AKP) is likely to win municipal elections on March 30, so the real question is what comes next? 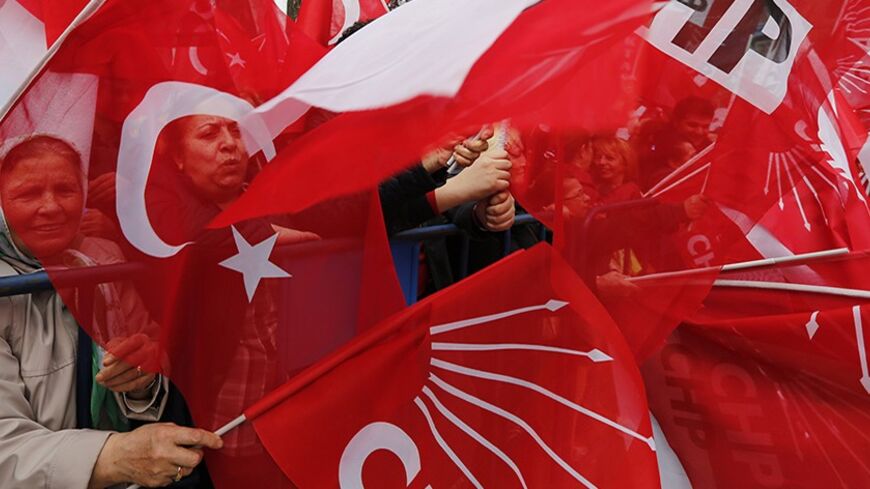 More than 52 million Turks are expected to go to the ballot box on March 30. They will elect mayors and other local administrators, who will be in office for the next five years. In other words, this is not a general election that will change the structure of parliament and the government. That election is scheduled for July 2015. Yet, many see these local elections as extremely significant, because it has taken the form of an implicit referendum on the popularity of Prime Minister Recep Tayyip Erdogan.

Four important political forces will compete with each other from the outset:

Few doubt that the AKP will, again, be the winner of the elections in respect to the national average. The question is how decisive its success will be. There have been numerous polls predicting the results. Accordingly, the AKP’s national average is 35-45%. The CHP's is somewhere around 25-30%. The MHP follows with 15-20%, and Kurdish parties are expected to get some 7-8% of the national average.

In the previous local elections, held in 2009, Erdogan’s AKP had won 39% of the national average. Hence, Erdogan has declared that anything above this threshold will be a victory. Others, however, point to the 50% support the AKP captured in the 2011 general elections, arguing that the ruling party’s score should be judged according to that figure.

Besides the national average, it also matters which party wins the municipalities of key cities. In the two biggest cities, Istanbul and Ankara, polls suggest that AKP candidates Kadir Topbas and Melih Gokcek — who have been in power for one and two decades, respectively — are still leading, but are closely followed by the CHP’s new stars, Mustafa Sarigul and Mensur Yavas. In the coastal and secular Izmir, traditionally a CHP citadel, the CHP is expected to win decisively. Kurdish parties are expected to dominate in the southeast and move one step closer to their dream of autonomy.

Of note, the CHP, after decades of dogmatic secularism that isolated the party from the conservative masses, recently took the smart step of transferring some figures from Turkey’s center-right, such as Mansur Yavas, the Ankara candidate. The CHP candidate in Bursa, Necati Sahin, is a conservative figure whose wife wears the Islamic headscarf. Votes will determine the effectiveness of this conservative, party outreach, which has led to some uneasiness among the party’s hard-core secularists.

The most important outcome of the elections, however, will be the AKP results. For many months, Turkey has been deeply and increasingly polarized between Erdogan's passionate opponents and his passionate supporters. Erdogan and his close circle were first targeted in a corruption probe and then in a series of wiretaps released via the Internet and revealing assorted government wrongdoing. In response, Erdogan has blamed Turkey’s “enemies within,” in particular the Gulen movement, which is believed to have a strong presence within the police and judiciary. Erdogan has repeatedly claimed that the Gulen movement has created a “parallel state” within the state that acts according to its own religious hierarchy and political objectives. Spokesmen for the movement deny the accusation and instead blame Erdogan and his party of corruption and authoritarianism.

It is undeniable that Turkey is in a downward spiral toward authoritarianism, in part because the government feels threatened by hidden enemies using effective tactics — including wiretapping, hidden cameras and other forms of espionage — and is therefore responding with extreme measures, such as blocking Twitter and YouTube. One of the latest episodes, and perhaps the most serious so far, was revealed March 27 and rocked the country. Audio files of a secret meeting at the Turkish Foreign Ministry about policy on Syria were released on YouTube, leading to a passionate public debate and strong government condemnation. Foreign Minister Ahmet Davutoglu went so far as to declare, “Wiretapping our prime minister, ministers and top officials is an open declaration of war against the Republic of Turkey.”

The March 30 elections are so significant, because they will show how popular the government’s alarmism is concerning its hidden enemies — or, as I wrote in Al-Monitor, “Erdogan’s great patriotic war.” In the face of all the claims of corruption and authoritarianism, Erdogan has been pointing to the ballots — not the courts — as the final arbiter. Therefore, his target is another strong mandate from Turkish voters to continue with his current policy and rhetoric. He claims he will go even further, promising that if he gets the support of the people, he will initiate an extensive purge on the “parallel state,” which will turn into a witch hunt of Gulen movement members, with its media outlets, businesses and nongovernmental organizations. Hence, reportedly, the Gulen movement’s strategy is to weaken the AKP at all cost and advise its voting base — estimated to be 2-3% of the electorate — to vote for the strongest non-AKP candidate in each municipality.

Due to this poisonous polarization, these elections might not be the way out of Turkey’s political crisis as some previous elections have been. To the contrary, the assessment by Al-Monitor contributor Yavuz Baydar that there are “harder times ahead, no matter who wins” seems more accurate. If Erdogan wins big, a dark era will begin for all the “traitors” at whom he has been pointing his finger. If he instead faces his first political setback, the war of attrition against him, especially by those veiled forces behind the wiretaps, will probably push for a bigger fall. In any case, Turkey is likely to continue to be a political war zone in the months to come, at least until the presidential elections scheduled for August 2014.