Despite Turkish Prime Minster Recep Tayyip Erdogan’s missteps, the lead opposition parties are in disarray, and there is no challenger to his bid for president, if he decides to run. 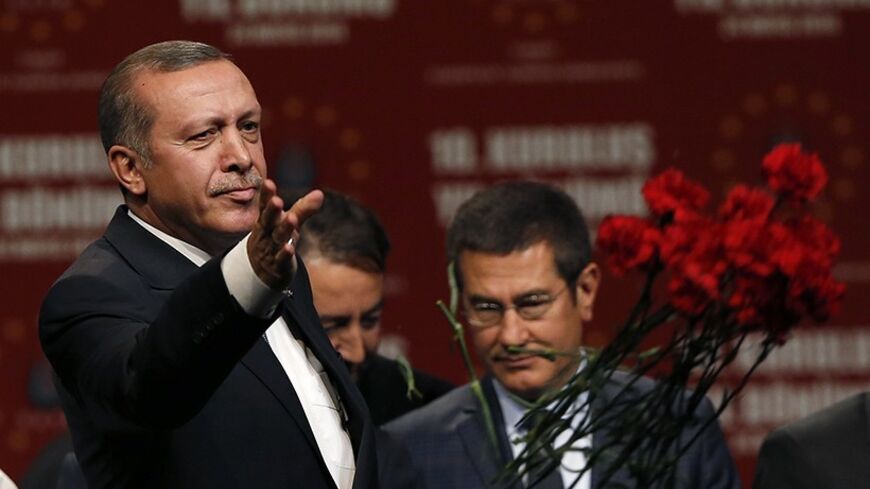 Turkish Prime Minister Recep Tayyip Erdogan throws flowers to his supporters during his visit in Cologne, May 24, 2014. - REUTERS/Wolfgang Rattay

Prime Minister Recep Tayyip Erdogan is keeping everyone on edge by not announcing whether he will run in Turkey’s first direct presidential elections Aug. 10. It he does, however, he's slated for an easy win. But if he decides not to run, any candidate his Justice and Development Party (AKP) puts up will have a serious head start in the race.

One principal reason for this is the disarray among the two main opposition parties in parliament. There is just over two months to go before Turks head to the ballot box, but these parties have still not been able to produce credible candidates who might upset the AKP’s political plans.

The only thing the Republican People's Party (CHP) and the Nationalist Action Party (MHP) — the two principal opposition parties in parliament — agree on currently is their desire to prevent Erdogan from becoming president. Both parties believe that Erdogan, who has shown increasing authoritarian tendencies and has made no secret of his intention to act like an executive president if elected, must be stopped.

But neither party has been able to come up with a credible joint candidate or their own separate candidates to run against Erdogan, or an AKP candidate, who has the slightest chance of winning. How they expect the person or persons they will inevitably nominate to introduce themselves to the electorate and promote their political platforms in the short time left is unclear.

Also working to the opposition’s great disadvantage is the demoralizing effect the results of the March 30 local elections have had on the secular urban middle class. The AKP won those elections by gaining nearly 45% of the vote, despite last year’s Gezi Park protests and corruption allegations against the government.

This forced members of the urban elite into a sense of resignation and indifference vis-a-vis the presidential elections, whose results appear a forgone conclusion at this stage. Secular middle-class Turks generally move to the coast for the summer months, and many of them are unlikely to return to the cities where they are registered to vote in August.

Some analysts are therefore predicting a relatively low turnout for these elections because of the indifference among secular middle-class Turks. This does not apply to the AKP’s Islamist and conservative followers, however, who consider their historic moment has arrived.

The AKP has been focused on the presidential elections for some time now, with a clear and unified strategy that also covered the March 30 local elections, and is eyeing the general elections planned for 2015. Its self-declared aim is to remain in power and provide strong leadership all the way up to 2023, the centenary of the Turkish Republic.

Given this long perspective the only viable leader for the AKP appears to be Erdogan, and the countless soundings the party has made among AKP deputies and supporters has revealed an overwhelming preference to see him as president.

The only question keeping Erdogan preoccupied currently, and delaying his decision on whether to run in August, is said to be concerns about the fate of the AKP after he leaves the party’s leadership to become president.

Some are concerned that there might be an internecine struggle for the leadership among leading party members now that President Abdullah Gul, a co-founder of the AKP with Erdogan, signaled that he has no intention of assuming the AKP leadership and becoming prime minister.

Others argue, however, that the party’s sense of mission — which has won it eight successive elections — and Erdogan's leadership will continue to provide even if he becomes president, preventing any self-destructive power struggle within the AKP.

This, then, is the strong current the opposition is rowing against.

Taking the lead, MHP leader Devlet Bahceli has been engaged in a series of political talks with politicians and leading political figure, including Gul, to sound out views on a potential consensus candidate for the presidential elections. The disarray of the opposition is apparent here also since it was the CHP that initially called on opposition parties in parliament to come up with a joint candidate, a proposal the MHP refused at first.

The MHP finally came around to accepting this, but valuable time was lost. CHP leader Kemal Kilicdaroglu also started a similar round of talks this week with a view to seeing who a likely consensus candidate against Erdogan may be. So far, however, his efforts have produced little.

The opposition's weakness in this regard was highlighted this week when media reports indicated that Bahceli had asked Gul to be their candidate, but the proposal was politely declined. When asked about this, Bahceli responded by saying that not everything in the press should be believed.

Gul, for his part, chose to remain silent when asked about this claim, thus fueling the belief that there must be some truth to these reports.

Whatever the truth may be, this claim did not do much to bolster the opposition’s position.

The difficulty for both the CHP and MHP in coming up with a joint candidate is that this person will have to satisfy diverse and in many cases opposing expectations. Such a candidate will have to be a staunch secularist and modernist to satisfy the CHP’s Kemalist grass-roots supporters, while also appealing to strong conservative, religious and nationalist sentiments among MHP followers as well as AKP supporters, without alienating secular Alevi or Kurdish voters.

Whether such a person exists in Turkey, a country whose ideological, ethnic and sectarian fault lines have become more apparent in recent years, is an open question. Erdogan, for his part, claims he will be “the people’s president” if elected, but he clearly has no interest in trying to accommodate everyone within Turkey’s social diversity. He remains strongly focused on his own Islamist based ideological mission.

If he runs, he wants to win the presidential elections in the first round of voting, of course, and has said so openly, to bolster his claim to be the people’s president. He will, however, be satisfied with any victory, even if this is based on a slim majority of the votes, since he will continue to have a strong base in parliament.

While it is early days yet, many analysts — recalling the past 12 years — are also predicting that the AKP is poised to win the 2015 general elections, unless a truly debilitating leadership battle breaks out within the AKP, or the country is faced with a serious economic meltdown in the interim.

The almost chronic inability of the opposition parties over the past decade to come up with strong political platforms that might give them a chance of victory against the AKP also reinforces this forecast concerning the AKP’s future success.

There is also speculation that a strong win in the presidential elections could prompt the AKP to call early elections to consolidate its hold over power, and thus introduce constitutional changes that will enable Erdogan to exercise executive powers legally. While his intention is to do so if elected in August, the present constitution does not allow him legally to exercise power as he will.

There are also pitfalls for the CHP and MHP regarding the presidential elections if they do not come up with the right candidates, or if they pursue the wrong political strategies. The MHP’s conservative and nationalist supporters are much closer to the AKP than they are to the CHP in ideological outlook.

A joint CHP-MHP candidate with no public credibility could therefore push MHP supporters to vote for Erdogan, thus strengthening the AKP’s hand further, and weakening both the CHP and MHP politically in the lead-up to the general elections.

There are those who see the Kurdish vote as the wild card in the presidential elections that could tip the balance against Erdogan and the AKP. This, however, is highly unlikely given the AKP’s “Kurdish opening” and the political antipathy toward the CHP and MHP among Kurds.

The AKP’s opening may appear stalled for the moment, but has provided far more to the Kurds than the CHP or MHP ever did in the past or are likely to do in the future, given the sentiments of the Kemalist and nationalist grass-roots supporters of these parties. It is very likely, therefore, that the Kurdish vote will also go to Erdogan, or an AKP candidate, even if the pro-Kurdish parties in parliament produce their own candidates for president.

Looking at the big picture, Erdogan looks unstoppable while the opposition appears to be laboring futilely to prevent him from becoming Turkey’s first directly elected president.

It's not just that Erdogan is so successful politically; it's also that the opposition is so unsuccessful.