Given his continuing hold over the AKP, negotiations for a coalition government could be stymied by Turkish President Recep Tayyip Erdogan if developments take a turn he does not favor. 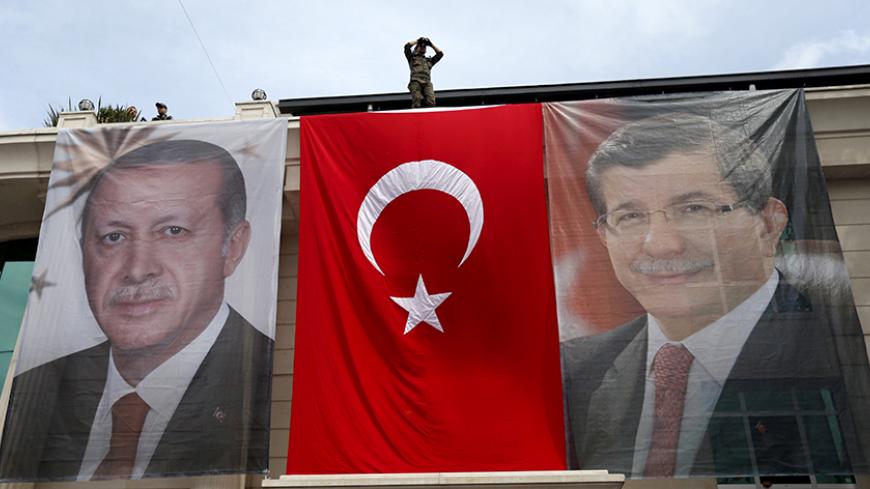 A policeman checks security measures from the top of a building where a Turkish flag and portraits of Turkish President Recep Tayyip Erdogan (L) and Prime Minister Ahmet Davutoglu are displayed in Istanbul, June 3, 2015. - REUTERS/Murad Sezer

With the general elections over, Turkey's political agenda is dominated by speculation about the coalition government that has to be formed after the Justice and Development Party (AKP) lost the parliamentary majority it held for 12 years.

This is the worst result President Recep Tayyip Erdogan could have expected, not only because his leadership plans seem shattered, but also because the AKP he led for over a decade as prime minister has lost its pre-eminent place in Turkish politics. His shadow nevertheless continues to hang over the political scene, making efforts to form a coalition more difficult than otherwise might have been the case.

The corruption allegations Erdogan had to face while he was still prime minister, the overly ostentatious palace he moved into shortly after being elected president in August 2014 and his vacillations regarding the Kurdish problem have come home to roost for the AKP.

Before the elections there was talk about a partnership between the AKP — if it lost its parliamentary majority — and the pro-Kurdish Peoples’ Democratic Party (HDP). The fact that the AKP government initiated the peace process, also referred to as the “Kurdish opening,” to settle Turkey's long festering Kurdish problem, fueled the speculation in this regard.

Many believed the HDP would accept a deal with the AKP, which would also help Erdogan realize his leadership ambitions, in return for concessions to the Kurds. But Erdogan dealt a serious blow to this possibility when he claimed in March that Turkey did not have a “Kurdish problem.”

The HDP took this as a sign of the AKP’s insincerity with regard to the Kurdish opening. All Erdogan achieved in the end was to alienate Kurdish voters and drive a wedge between the AKP and HDP.

HDP leader Selahattin Demirtas said after the elections that the best solution for Turkey now would be a coalition between the AKP and the Republican People's Party (CHP), which came in second in the elections, adding they could provide outside support to this government.

Nuray Mert, a prominent commentator for daily Cumhuriyet, also believes that this is the best chance for a continuation of the Kurdish process and for social peace in Turkey. She said, however, that “the CHP has to convince its electorate that the priority is not to corner Erdogan, but to save our future through a process of democratic restoration.” What Mert says, though, may be hard to achieve. Even if the political differences between the two parties could be overcome, it seems Erdogan will remain a stumbling block.

The CHP has said it wants to not only roll back much of what was done under the Erdogan government, but to also pursue “17/25 December corruption probes” involving key ministers in that government, and Erdogan’s son Bilal.

Dogu Ergil, a professor of political sociology and well-known commentator on political issues, points to the fact that all the parties made these allegations a cornerstone of their election campaigns and cannot climb down now. “The only possibility is for the AKP to sacrifice the former ministers involved and try and confine it to that,” Ergil told Al Monitor.

He acknowledged that the opposition may still want to go after Bilal Erdogan, but said the price of this would be that a government cannot be formed. “That would suit Erdogan who would use this to argue in favor of single party rule, and the merits of a presidential system,” Ergil added.

Erdogan claims the probes opened against AKP ministers and his son were a coup attempt against his government by Fethullah Gulen, the Pennsylvania-based Turkish cleric, and has used the AKP’s parliamentary majority to prevent the investigations from going ahead.

The AKP might sacrifice the former ministers accused of corruption, especially since it is clear that they contributed to the party’s electoral losses. But to allow a reopening of the probes against them would mean reopening the case against Bilal, which the AKP clearly can’t allow given that Erdogan remains its “spiritual leader.”

The CHP also has other axes to grind with Erdogan, such as his moving the presidency away from its traditional place in Ankara’s Cankaya district, where it has been since the time of Ataturk, the founder of the republic. It has vowed to correct these and to curb Erdogan’s powers if it comes to power. The AKP will not support the CHP in this also.

Although an AKP-CHP “grand coalition” may be desired by the business community and those who hope the "Kurdish opening" will continue, its chances of being formed appear slim. The possibility for a coalition between the CHP, HDP and the ultranationalist Nationalist Action Party (MHP), on the other hand, appear almost nonexistent. The pro-Kurdish HDP and Turkish nationalist MHP remain irreconcilable.

This leaves only one option, namely an AKP-MHP government that would mean a conservative Islamist-nationalist government. The MHP has directly or indirectly supported the AKP in the past on issues like the lifting of the ban on Islamic headscarves in schools, public places and in parliament, or the election of former President Abdullah Gul by parliament in 2007 — before the law was changed to have a directly elected president.

But all is not smooth in this regard, too. The MHP has voiced strong opposition to the “Kurdish opening” saying this as “treasonous” because it also involves negotiating with the separatist Kurdistan Workers Party (PKK), which most Turks see as a terrorist group.

Notwithstanding this, an adviser to MHP leader Devlet Bahceli declared earlier this week that they were not opposed to efforts aimed at solving the Kurdish problem, but added, “The PKK had to surrender its arms and sit down for talks with the state without any preconditions.”

This was followed by the remarks of Economy Minister Nihat Zeybekci, a prominent AKP member, who said that prospects appear better now for a coalition with the MHP after some positive statement from this party. This, though, is where Erdogan’s shadow comes in again.

The MHP is also not prepared to let the corruption allegations against former AKP ministers, and Erdogan’s son Bilal, go easily. Bahceli was quoted after the elections saying they were not opposed to negotiating with the AKP, but they could not brush aside the corruption issue.

“An AKP-MHP coalition is possible but we have conditions we cannot overlook … Where will we put the 17/25 December probes? … They are trying to cover these up but we can’t disregard this,” Bahceli reportedly told party members after the elections at a meeting closed to the press.”

“Bilal is also involved. Let him give us Bilal and have his government,” Bahceli reportedly added, in a clear reference to Erdogan. Bahceli is also on record saying they would prefer to let the AKP and CHP form a government while they remained in the opposition. It's unclear if he is sincere or is signaling that he will engage in hard bargaining to secure key ministries in any coalition government.

If it's the former, the chances of an AKP-MHP coalition will be slim. If it's the latter this means the MHP will eventually ease the pressure on Erdogan, for the sake of coming to power. There are staunch AKP supporters, like Nagehan Alci, a columnist for daily Milliyet, however, who believe that a partnership with the MHP will do more harm than good for the AKP.

Referring to Bahceli’s remarks concerning Bilal as “ugly,” Alci said these remarks alone show that an “AKP-MHP coalition should not happen.”

The horse trading will begin in earnest next week after the new parliament is sworn in and the new speaker elected, following which Erdogan will ask Prime Minister Ahmet Davutoglu, as the head of the party that got the most votes, to try and form a government.

Erdogan will follow developments very closely since his own fate will hang in the balance. He said after the election that parties must leave petty politics aside and form a government for the sake of the country. His critics claim he is banking on things going awry and forcing early elections, which he hopes will bring the AKP to power on its own.

The bottom line: With his continuing hold over the AKP, Erdogan could still be a spoiler if the bargaining for a coalition government appears to be taking a turn he does not favor.