Gul calls out Erdogan at iftar

Abdullah Gul, Turkey's former president and co-founder of the Justice and Development Party, calls for an urgent revision of Ankara’s foreign policy. 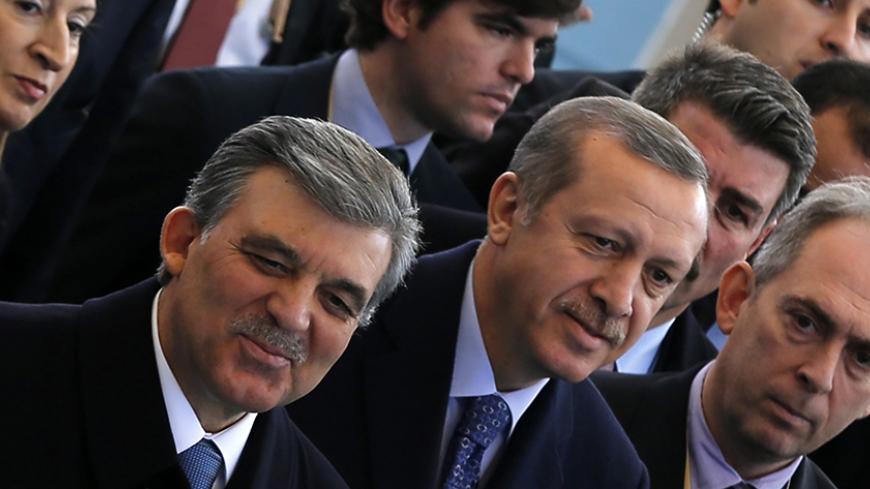 The June 7 elections not only ended the 12-year rule of the Justice and Development Party (AKP), but they also appear to be the beginning of a change in Turkey’s foreign policy orientation. Up for debate is Ankara’s untenable position in the Middle East, where it has no say over developments despite the dire affect those developments have on its security and economic interests.

With no guarantee that the AKP will regain its pre-eminent position in early elections, if a coalition government can’t be formed in the coming days, many consider the Sunni-based, pro-Muslim Brotherhood policies of President Recep Tayyip Erdogan — the AKP’s “spiritual leader” — and Prime Minister Ahmet Davutoglu to be at an end.

Ankara’s regional isolation may be seen as a “precious loneliness” by Erdogan’s close advisers — in a thinly shrouded effort to put a positive and moralistic spin on it — but even influential people associated with the AKP see that there is, in fact, precious little value to this “loneliness.”

Former President Abdullah Gul, Erdogan’s political fellow traveler and co-founder of the AKP, is the latest to lend his weight to the need for an urgent revision of Ankara’s foreign policy to make Turkey an “inspiring country” in its region again. Speaking at an iftar dinner last week, which was also attended by Erdogan, Gul made it clear that there was little to be gained from maintaining current policies.

Pointing out that it is deplorable that Muslim countries are consuming themselves with bitter conflicts, Gul added that Turkey has to be in a position to help these nations. “In order to achieve this, we have to develop ties with all of them. We have to once again become a source of inspiration, as we were in the past, and provide guidance to these countries, from Libya to Egypt, from Yemen to the Gulf states,” Gul said.

“I am of the opinion that it would be useful to review our Middle East and Arab policies in a more realistic manner,” he said, adding that the region is up against the possibility of drifting toward a major state of chaos that could leave Turkey “facing unexpected surprises.”

Similar views were expressed by Kemal Kilicdaroglu, the leader of the main opposition Republican People’s Party (CHP), only a few days before Gul spoke. This has fueled speculation that what lies in Gul’s heart is a grand coalition between the AKP and the CHP. These parties are currently exploring the possibility of forming a coalition government.

Many influential people believe that an AKP-CHP coalition would speed up the revision of Ankara’s foreign policy, whereas a coalition between the AKP and the Nationalist Action Party (MHP), the only other viable option, would delay it. Change under an AKP-MHP coalition would, it is believed, come as a result of piecemeal reactions to regional developments instead of forward-looking, proactive decisions aimed at ending Turkey’s regional isolation.

The staunchly anti-Kurdish MHP recently called for the Turkish armed forces to enter Syria as soon as possible to prevent the Syrian Kurds from gaining autonomy, a development that also hints at this party’s lack of understanding of the subtleties of a realistic foreign policy.

Gul’s remarks resonated not only in Turkey but in the Iranian and Arabic media coverage area, because they were spoken in Erdogan’s presence. Erdogan remains vehemently opposed to normalizing ties with Egypt as long as ousted President Mohammed Morsi remains in prison, facing a death sentence, while Abdel Fattah al-Sisi, who ousted him, is president.

The writing on the wall, however, doesn’t bode well for Erdogan, whose ability to influence policy hinges on his ability to control the AKP. Erdogan had hoped the AKP would gain enough parliamentary seats in the June 7 elections to change the constitution on its own in order to make him an executive president.

The AKP not only failed to get that majority but also lost its parliamentary majority, leaving Erdogan in limbo with regard to his plans. The fact that Turkey will now most likely be governed by a coalition also means Erdogan’s regional expectations and ambitions are off the table for the foreseeable future, unless politics in Turkey take an unexpected turn, which appears unlikely.

Asked to comment on the former president’s remarks, Yasar Yakis, who is a founding member of the AKP and served as its first foreign minister during the brief premiership of Gul in 2002-2003, said there was little in these remarks that was new to him, given his past discussions with Gul.

“What is important is that they were uttered with President Erdogan sitting in front of him,” Yakis told Al-Monitor. “There is truth in what Gul is calling for and which is long overdue.” Yakis, who was also the former ambassador to Saudi Arabia and Egypt, added that there are signs the Davutoglu government is coming around to this view.

Yakis pointed to reports that Ankara is preparing to work more closely and effectively with Washington against the Islamic State and other issues pertaining to the Middle East. “The AKP may also move to revise Ankara’s foreign policy in the coming days in order to show the public that it is the author of change, rather than having been forced into it by its coalition partner,” Yakis said.

It is interesting to note that reports appeared in the Israeli and Turkish media immediately after the June 7 elections, indicating that senior diplomats from the two countries were meeting discreetly on ways to overcome the current impasse in their ties.

Yakis said that an AKP-CHP coalition, rather than an AKP-MHP one, would be better with regard to the needed revision of Turkey’s current foreign policy. He stressed that the MHP has a nationalist agenda predicated on preventing the AKP government’s peace process with the Kurds in Turkey and preventing the Kurds in Syria and Iraq from gaining independence or autonomy. “Iraq and Syria are two issues Ankara will have to come to terms with in the coming period, including the Kurdish dimension, and the AKP could find the MHP as a hindrance in this regard,” Yakis said.

Hikmet Cetin, a former chairman of the CHP who served as foreign minister from 1991-94, also said there is no great surprise in what Gul said, although he believes Gul could have been much more influential if he had been more forceful with his views while he was president.

“For example, he congratulated Sisi after he was elected president in Egypt, but did not follow this up by emphatically underlining the need for improved relations with Cairo,” Cetin told Al-Monitor. He said Ankara is faced with the urgent need now to come out of its current stalemate in the Middle East, especially at a time when Iran is gaining ground.

According to Cetin, Turkey’s present regional isolation is due to the three cardinal sins of foreign policy it committed: pursuing an ideologically based foreign policy (in this case, a Sunni-based one), allowing domestic political considerations to spill over into the foreign policy domain and interfering in the domestic affairs of other countries.

Cetin also believes that the best coalition formula for coming out of this isolation is an AKP-CHP partnership. “If this coalition is formed, the first task of the new foreign minister should be to appoint ambassadors to Egypt and Israel within the first 10 days of assuming office,” Cetin said, underlining the importance of realism in foreign policy. Turkey’s diplomatic representation in these countries remains low due to strained ties.

“Everyone has special desires about what they want to see in the foreign policy domain. But countries have to act according to the realities they are faced with. If Turkey can come back to a realistic line, this will be better for the whole region, which is what Gul is also underlining now, albeit belatedly,” Cetin added. He said Gul’s remarks were a clear sign that he prefers to see a coalition formed between the AKP and the CHP.