Turkey's June 7 parliamentary elections signaled a resounding loss for the ruling Justice and Development Party, so what are its options? 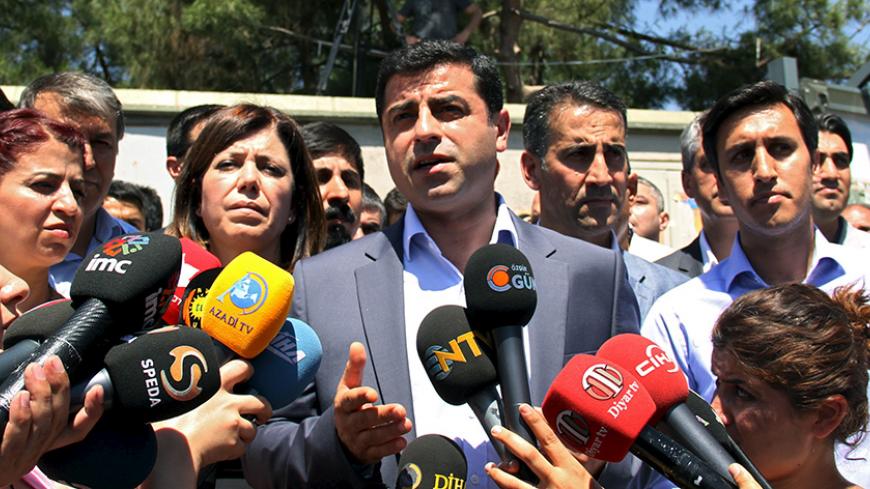 The followers of Al-Monitor’s Turkey Pulse should not have been surprised by the developments in the aftermath of Turkey’s June 7 parliamentary elections. We had accurately predicted that Turkey would head toward a period of uncertainty.

The pivotal importance of the elections rested on two main pillars: whether the pro-Kurdish Peoples’ Democratic Party (HDP) would manage to pass the world's highest, undemocratic national 10% threshold; and whether the HDP’s success would cost the ruling Justice and Development Party (AKP) its parliamentary majority, which it has enjoyed since 2002.

The elections were important not merely due to their determining the distribution of seats in the next parliament. They also signaled whether Turkey would be drifting toward an authoritarian one-man rule under President Recep Tayyip Erdogan through an executive presidency.

Any assessment disregarding these essential yardsticks would be wrong and misleading. This was the case, for instance, with Michael J. Koplow’s recent Foreign Affairs article.

Even the title of his piece is a nonstarter in terms of an accurate evaluation of the election results: “Erdogan’s Victory: Why the Election Wasn’t a Loss for the President and the AKP.”

If there is a single appraisal of the outcome of the elections, it was anything but a victory for Erdogan.

Equally, it is anything but a victory for the AKP, as it lost its parliamentary majority for the first time since the fall of 2002. The party under Erdogan’s leadership had been geared for the recent elections as the architects of the ambitious mega projects — personal and economic — and for the 100th anniversary of the Republic of Turkey in 2023.

Now that may well be a pipe dream, as nobody knows whether Erdogan’s presidency — and even the AKP — can survive until 2023.

Non-Turkish observers living abroad may have no sense of the zeitgeist in Turkey and, understandably, can reach inconclusive conclusions.

Yet, there are also non-Turkish and nonresident observers who deserve praise for their accurate assessment of the election results, such as David Gardner, the international news editor of the Financial Times and a frequent traveler to Turkey.

“While the main casualty of this week’s general election upset in Turkey is President Recep Tayyip Erdogan and his plan to institutionalize one-man rule, by saying no to an executive presidency Turkish voters have re-energized parliament as an institution, just as it was in danger of becoming a rubber-stamp,” Gardner writes.

“Voters took away the parliamentary majority of the Islamist-rooted Justice and Development Party, which Mr. Erdogan had led to three general election victories since 2002 before ascending to the presidency last year.”

As Koplow correctly emphasizes in his Foreign Affairs piece, the AKP is still the leading party of Turkish politics, receiving 41% of the vote in the June 7 elections. This result may be 15 points ahead of the main opposition Republican People's Party (CHP), yet this does not guarantee power-sharing because of the prevailing conditions in Turkey and the positions adopted by the three other opposition parties.

It could also indicate that the AKP is on a downhill trend. The trauma of the election results are being felt in the ranks of the party. The transition to the new political reality may not be as smooth as the pro-AKP circles wish it to be. Only 48 hours after the elections, some divergences have emerged between Erdogan and Prime Minister Ahmet Davutoglu regarding the assessment of the results. In a live interview with state-run TRT television, Davutoglu said that he is at ease with the parliamentary system as opposed to the presidential one, which “the Turkish electorate apparently rejected on Sunday.”

Erdogan called on political authorities “to suppress their egos” and work on a coalition agreement. His remarks seemed to be addressed to the prime minister.

Forbes was also among the periodicals that made an interesting prediction of the looming internal upheavals awaiting the AKP. “In any case, Prime Minister Ahmet Davutoglu may not survive, despite claiming victory and calling the AKP the ‘backbone of Turkey.’ Certainly Erdogan’s vision of an enhanced presidency appears dead. … Even half of AKP members oppose the idea. The government no longer can even pass common legislation if the opposition unites,” read the article.

“Indeed, Erdogan may find it hard to control his party. … Some AKP members indicate privately that they do not like being asked to subordinate their beliefs to Erdogan’s ambitions. … Erdogan remains his party’s most popular figure and might try to oust his critics, but an intra-party civil war could wreck the AKP and government. Potential aspirants for power abound, led by Abdullah Gul, a former AKP prime minister, foreign minister, and president with international credibility. … Other senior AKP officials also have run afoul of Erdogan and might enjoy a little revenge served cold.”

As we had predicted much earlier, the outcome of the elections is complicated. For many international observers, such an outcome means either an AKP minority government, a coalition between the AKP and right-wing nationalists, or more likely early elections.

Deniz Baykal, former CHP chairman who is supposed to chair the first session of the new parliament as its eldest member, had a long meeting with Erdogan after the elections. Sharing his impressions with private Kanal-D television, Baykal said Erdogan has early elections in his mind above anything else. However, a possible election rerun may not bode well for the AKP and Erdogan —​ the uncontested real loser of the elections.

The options are not infinite and are as follows:

With such options, another election in 2015 may seem to be the only exit. However, other than the MHP, this option is not desired by any other party involved.

We need to be patient. After all, the Turkish political stage is no longer a one-man show after Sunday’s elections. Turkish voters have re-energized the parliament as an institution that was in danger of becoming a rubber-stamp.

With the convening of the parliament, political maneuvers and the ingenuity of Turkish politicians will be on demand.

The summer of 2015 may be messy and full of uncertainty, but Turkey will not be at the mercy of one man and one party.

It is time for politics, which is the only exit.