How did 'Teflon Tayyip' win?

Recep Tayyip Erdogan owes his outright victory in the presidential polls to the strong bonds of identification he has forged with his electorate. 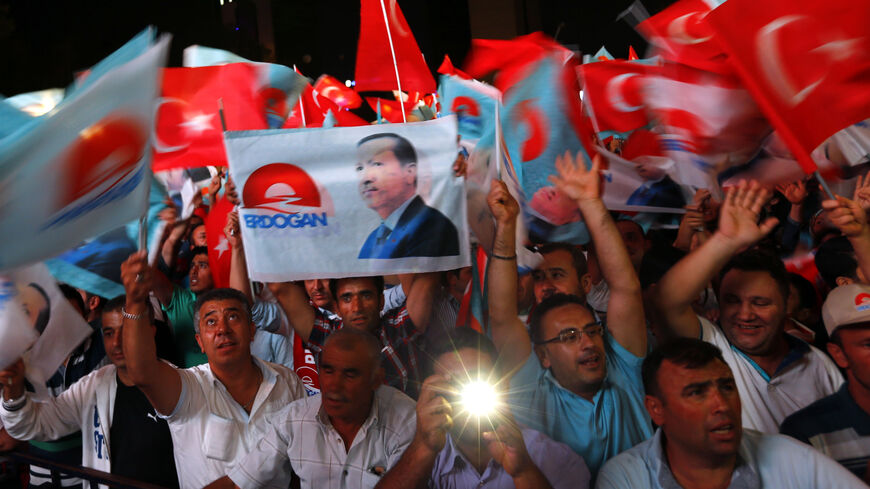 Supporters of Turkey's Prime Minister Recep Tayyip Erdogan celebrate his election victory in front of the party headquarters in Ankara, Aug. 10, 2014. Erdogan secured his place in history as Turkey's first directly elected president on Sunday, sweeping more than half the vote in a result his opponents fear heralds an increasingly authoritarian state. - REUTERS/Murad Sezer

Prime Minister Recep Tayyip Erdogan became Turkey’s first popularly elected head of state, mustering 51.8% of the vote, or 20.7 million votes, in the first round of the presidential elections on Aug. 10, according to preliminary results. With 55.6 million eligible voters, the turnout stood at 74.3%, below the country’s traditional average.

Ekmeleddin Ihsanoglu, the joint candidate of the two largest opposition forces, the center-left Republican People’s Party (CHP) and the rightist Nationalist Action Party (MHP), won 38.5% of the vote, or 15.4 million votes, according to the preliminary results. The figure signifies a glaring debacle for Ihsanoglu and the two opposition parties that supposedly backed him, for the CHP and the MHP’s combined vote in the March 30 local elections amounted to 43%, or about 20 million votes.

The third candidate, Selahattin Demirtas of the People's Democratic Party (HDP), who represented an alliance between the Kurdish movement and several leftist groups, garnered 9.7%, or 3.9 million votes, according to the preliminary results. This showing of the newly founded HDP and its co-chair Demirtas should be seen as a success, for it represents a 50% increase from the 5-6% support that the HDP’s predecessor, the Peace and Democracy Party (BDP), used to have.

The president’s election by popular vote became possible in 2007 as a result of the ruling Justice and Development Party’s (AKP) response to political interventions by the Turkish military and judiciary at the time. In April 2007, the general staff — averse to the prospect of Abdullah Gul’s election as president because of his Islamist roots — issued a harsh-worded online statement reflecting its objections, in what became known as the “e-memorandum” in Turkey’s political jargon. The Constitutional Court, for its part, canceled the presidential vote in parliament on the grounds that the house lacked the necessary quorum. In response to the crisis, the AKP called snap elections from which it emerged with a crushing victory. The party then drew up a constitutional amendment to have the president elected by popular vote, and the proposal was adopted at a referendum in October 2007.

The president’s current constitutional powers, which define the head of state as a “neutral” figure, will remain unchanged for now since no constitutional amendment is possible in the foreseeable future. Yet, Erdogan will now be capable to put into practice the “presidential system” he has in mind, empowered by the electoral support he got on Aug. 10 and using his absolute grip of the AKP.

Erdogan will seek to govern Turkey from the Cankaya Palace, equipped both with his new presidential powers and the prime minister’s powers that he will continue to use in a de facto fashion. If he succeeds in doing this — and this is quite a strong possibility — Erdogan’s successor at the government’s helm will not be a true prime minister but rather a “deputy president” or a “cabinet chairman.” Erdogan’s presidency will be an authoritarian, constitutionally incomplete “a la carte” presidential regime.

By winning the presidential race, Erdogan scored an achievement that is bigger than it looks to be. He proved once again he is truly the “Teflon Tayyip” as some Western media have called him.

For Erdogan, 2013 was an annus horribilis. He was first shaken by the Gezi Park revolt in the summer. Then in December, he, his family and his government became the target of corruption and bribery investigations. Wiretaps and other findings in the probes exposing large-scale corruption and bribery and implicating Erdogan’s son Bilal, four ministers and businessmen close to the government occupied Turkey’s agenda for weeks.

As in all crises and challenges he has faced, Erdogan held out against the probes by leaning on his loyal Sunni conservative electorate. Using the media he controls, he largely succeeded in convincing his supporters that the investigations were part of an international conspiracy and a coup attempt to bring him down.

In the March 30 local elections, the AKP and its candidates lost less support than expected. With the AKP retaining Ankara and Istanbul, the party’s showing was an electoral success given the severity of the challenges Erdogan faced.

Two terrible incidents followed, but they, too, seem to have had no impact on the backing Erdogan gets from his supporters.

First, a coal mine disaster in the western town of Soma claimed the lives of 301 workers on May 13. The disaster took on a political dimension when it emerged that the company operating the mine was close to the government and its negligence had caused the deaths. Then Erdogan was caught on camera personally tussling with and insulting a citizen who was booing him the day he visited Soma.

On June 11, the Islamic State (IS) seized Turkey’s consulate in Mosul and took 49 Turkish citizens, among them the consul general, hostage. The hostages remained in IS' hands as Turks went to the polls on Aug. 10. That the government failed to evacuate the consulate despite the obvious IS threat was a scandal, to say the least, and in a normal democracy the government would have paid a political price.

But as the presidential polls show, Erdogan’s electoral base sticks to its leader, unimpressed by corruption scandals, disasters and foreign policy debacles.

Thanks to this resilient electoral base, 2014 will not be a continuation of 2013 for Erdogan, though it will certainly not be an “Annus Mirabilis” either. Erdogan remains capable of implementing his power strategies as he plans. He owes this to three main factors:

First, though the Turkish economy has been slowing down in the past two years, the electorate has not yet shown any strong reaction to the gradual downturn. Hence, the AKP government continues to reap the fruits of its long-standing social policies aimed at boosting the welfare of the impoverished and low-income Sunni conservative masses.

Second, Erdogan has forged strong bonds with his electoral base, which seem unshakeable at present. The conservative Sunni masses virtually identify with Erdogan and are building a personality cult around him. Erdogan, in return, makes sure they savor the joys of power, implementing conservative cultural and educational policies and using special codes to communicate with them.

The combined effect of these two factors makes Erdogan resistant to corruption scandals and political calamities.

The third factor lays in the AKP’s powerful organizational machine that penetrates almost all arteries of society, the government’s enormous control over the media, the state resources it has at its disposal and the huge financial resources it mobilizes to finance its politics. The combination of all those advantages make for an unequal and unfair electoral environment that favors the ruling party.

The CHP and the MHP, on the other hand, obviously failed to convince all their electorate to back their joint candidate. Ihsanoglu lost votes mainly because the MHP failed to convince its supporters to align with the CHP. The CHP, for its part, failed to make use of the opportunity Ihsanoglu presented due to the party’s shortcomings in almost all aspects, from leadership to organization. The outcome shows that the MHP lost some of its conservative nationalist voters to Erdogan, while the CHP failed to get part of its supporters to cast their votes.

If Erdogan insists on using his political power as he likes despite a constitution barring him from doing so, the outcome of Turkey’s presidential election will mean a country of ups and downs, forever in a state of constitutional legitimacy crisis.