Turkey's Prime Minister Recep Tayyip Erdogan will use all his power to clinch a first-round victory in the presidential race on Aug. 10, which is not assured. 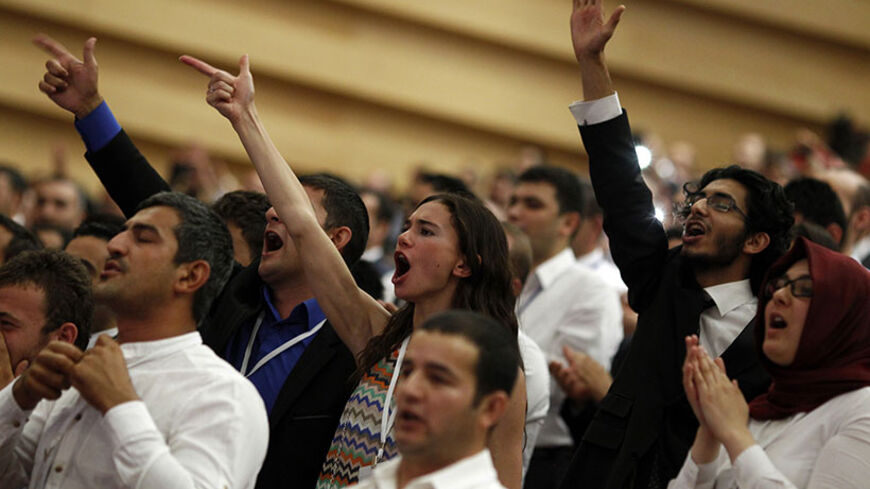 The stage for Turkey’s August presidential polls was set on July 1 when the ruling Justice and Development Party (AKP) formally announced its founder and chairman, Prime Minister Recep Tayyip Erdogan, as a candidate, with the opposition contenders already announced.

The three presidential candidates, representing four parties, will compete in an imbalanced and asymmetric race, swayed by multiple variables.

Ekmeleddin Ihsanoglu — fielded jointly by the main opposition Republican People’s Party (CHP) and the second largest opposition force, the Nationalist Action Party (MHP) — and Selahattin Demirtas — the candidate of the People's Democratic Party (HDP), which recently succeeded the pro-Kurdish Peace and Democracy Party (BDP) — will campaign in an environment of unfair competition against the prime minister.

Erdogan, Turkey’s most powerful politician by many standards and by a long way, wields a great advantage over his rivals: The state’s financial and physical capabilities will be at his disposal for his election campaign.

Erdogan’s second big advantage is the huge media power he has. Nearly half of Turkey’s print media and more than half of the TV channels are under direct government control, in addition to publicly owned TV channels, which are supposed to be impartial by law but are openly pro-government. The mainstream media, for their part, are in the grips of “indirect censorship” and self-censorship, induced by heavy government pressure, hence failing to properly carry the opposition’s voice to the wide masses.

The Justice and Development Party’s (AKP) highly efficient and financially powerful electoral machine is another factor that puts Erdogan ahead of his rivals.

On top of all those advantages and superiorities, Erdogan wants to add another one: religion. The acceptance speech he made on July 1 following the announcement of his candidacy before the AKP political elite — an audience of more than 4,000 people, including the party’s founders, its former and current managers, lawmakers, mayors, ministers and government officials — was reinforced with Islamic elements from start to finish.

This is how he started his speech, which lasted more than an hour: “Praise be to Allah, the Lord of the worlds. Allah is the one and only owner of victory. Endless praise to my Lord, the one who brought this cause, this movement, this struggle to the present day. … Like Alparslan, the Seljuk sultan, we embarked on this struggle clad in a shroud [ready to die]. Like Tariq ibn Ziyad, the conqueror of Andalusia, we burned the ships as we started out. Oh Lord, on this blessed day, our wish from you, the omnipotent, is to herald another victory for this people.” Erdogan ended his speech by reciting in Turkish the Al-Fatiha, the first chapter of the Quran.

Neither of the two other candidates can be expected to be as Islamist as Erdogan or to use Islamic elements in their rhetoric as much as he does.

Erdogan’s goal is to win the presidency in a crushing, indisputable fashion by grabbing more than 50% of the vote in the first round on Aug. 10. This ambition for a hegemonic ascent to the top post meshes with his vision of a “presidential mission” that would put a de facto end to the presidency’s impartial character under Turkey’s parliamentarian regime. And the political discourse and style he has adopted to achieve this goal certainly provide grounds to suggest he attributes a divine meaning to his desired ascent to the presidency.

In his speech, Erdogan made frequent references to “Aug. 10,” seeking to give the impression he is confident of a victory in the first round. For instance, he said, “Aug. 10 will mark not only the election of [Turkey’s] 12th president. Aug. 10 will mark the end of a dark era — the era of tutelage — as the people [directly] elect the president [for the first time].”

Based on those figures, the ruling party and the opposition are more or less even, and the Kurdish movement holds the key for Erdogan’s potential first-round victory. But, again, only if the March 30 results are taken as a benchmark.

Erdogan and the AKP contested the March 30 polls amid accusations of large-scale corruption and eventually lost 2.5 million votes compared to the 2011 general elections. It remains to be seen whether some of the lost AKP voters will gravitate back to Erdogan. In any case, he will still need to lure some support from the Kurdish movement’s grassroots to get elected in the first round. The HDP, however, has already signaled it will not treat him to a quick victory by fielding Demirtas, its most powerful political figure, in the race.

If the elections go into a second round, one factor that could encourage HDP voters to back Erdogan is the Kurdish draft bill the government unveiled on June 26. The proposed legislation is designed to provide an official legal ground and guarantees for the contacts the government has been holding with the Kurdish movement as part of the so-called “peace and settlement process.” The HDP, which had long demanded legal assurances for the “process,” welcomed the bill, though it said the proposed measures were insufficient. The AKP-dominated parliament is expected to pass the bill in the coming days.

In another development, seen as related to the presidential elections, the courts have accelerated the release of thousands of Kurds who were imprisoned and put on trial over the past several years as part of massive probes against the Kurdistan Communities Union (KCK), the Kurdish movement’s highest political body.

Voter turnout will be as critical for Erdogan as the Kurdish vote. The first-round victory he aspires to requires that around 70% of the electorate, which is quite a normal level for Turkey, goes to the ballot boxes. It should be noted here that the turnout could drop if the CHP fails to remedy the “Ihsanoglu allergy” that has emerged among its Alevi and nationalist-secularist supporters.

Had the CHP and the MHP fielded separate candidates, Erdogan’s first-round victory would have been a stronger possibility. Hence, the two parties agreed on a joint candidate capable of luring support also from the AKP base, and Ihsanoglu emerged as their surprise nominee.

Ihsanoglu, who served an eight-year stint as secretary-general of the 57-member Organization for Islamic Cooperation (OIC) until 2013, is a pious person but not an Islamist hostile to secularism, a profile that gives the CHP-MHP pair a chance to stop Erdogan, provided they make smart use of it.

Yet, the CHP appears to be mismanaging the chance the party itself created. In the runup to Ihsanoglu’s nomination, CHP leaders failed to properly explain why a joint candidate was needed and why this candidate had to be the likes of Ihsanoglu. As a result, they failed to prevent the development of an allergic reaction in some CHP quarters, who are irked both by the scarce public knowledge about Ihsanoglu in general and his personal profile as a pious figure with a lifetime career in Islamic affairs. Accordingly, some CHP grassroots are now inclined to shy away from voting. If the CHP fails to persuade them to back Ihsanoglu, this is likely to result in a lower turnout, which could help Erdogan clinch the victory in the first round.

Yet, it should be noted that Ihsanoglu is capable of luring support also from a number of small Islamist and religiously oriented nationalist parties as well as conservative voters skeptical of Erdogan.

After all, the upcoming polls are not a real presidential election but a crucial choice between the parliamentarian regime, embodied in Ihsanoglu, and the authoritarian, de facto presidential regime that Erdogan aspires to. The CHP is yet to get its own electorate to understand what is at stake.

All those variables will have a bearing on whether or not Erdogan triumphs on Aug. 10. A first-round victory is in no way in the bag.