Erdogan's divisive politics will give him first-round victory

Turkish Prime Minister Recep Tayyip Erdogan's fervent ethnic and religious discrimination will enable him to win in the first round of Turkey's presidential election. 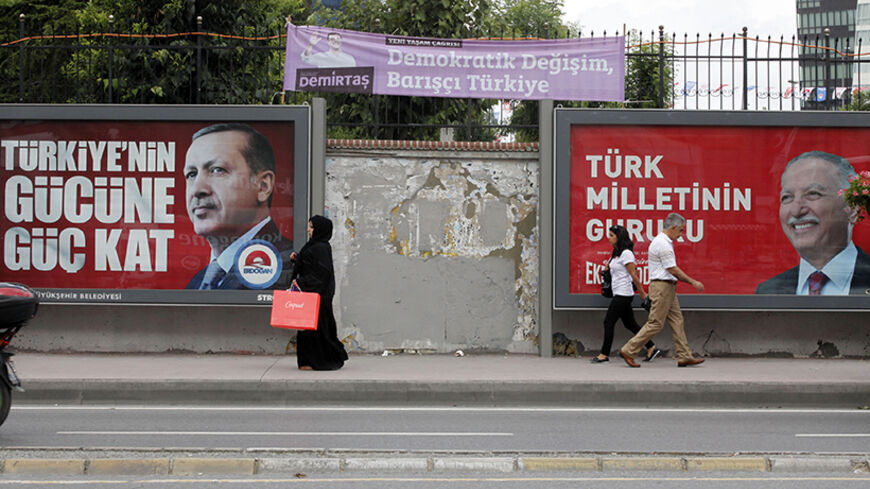 According to poll results released on Aug. 7 by KONDA, a leading polling company, Prime Minister Recep Tayyip Erdogan will win the presidential election in the first round on Aug. 10, with 57% of the votes.

Konda carried out the poll on Aug. 2 and 3 in 30 Turkish provinces, via face-to-face interviews with 2,720 respondents. The poll has a plus-minus 2% margin of error. Ekmeleddin Ihsanoglu, the joint candidate of the main opposition Republican People’s Party (CHP) and the Nationalist Action Party (MHP), is slated to obtain 34% of the vote, far below expectations.

The poll also predicted that Selahattin Demirtas, candidate of the People's Democracy Party (HPD) who represents the Kurdish movement and some leftist circles, will get 9% of the vote, which will be seen as a success for him.

Findings from other polling companies predicted more or less the same outcomes.

When announcing the poll's results, Tarhan Erdem, chairman of the board of Konda, made the following point: "The polarization that embraced most of the voters over the last ten years, after 2011 became dominant over the minds and pens of the sides. We now have two sides that respond to all issues within already well-known parameters and totally contradict each other with their mindsets, narratives and attitudes. These two sides, by transforming existing cultural, economic and social identities, have almost created two new political identities."

Erdem said, "Political rivalry in Turkey is now based on these two identities, without worrying about detailed arguments."

Erdem identified the lead actor of this "identity-based political rivalry" as Prime Minister Erdogan, "the one who planned this play and painstakingly, diligently staged it." He continued, "The opposition, without noticing the toxic atmosphere, accepted roles in this play without changing any of the scenes and dialogues."

It is not possible to agree with Erdem's analysis. To the contrary, the opposition, to disrupt Erdogan’s well-established strategy of winning elections by polarizing society around identities, agreed on the candidacy of Ihsanoglu, a Sunni conservative who is not an Islamist. The objective of this move was to divert votes from the Justice and Development Party's (AKP) Sunni conservative base by scaling the walls of separation erected by Erdogan's identity-oriented polarization policies.

But, if the Aug. 10 results confirm KONDA’s forecast, it will be obvious that the opposition did not achieve its goal.

No matter what percentage of people cast their votes on Sunday, Erdogan securing the high percentage of 57% in the first round will depend on two factors: First, Ihsanoglu will not be able to take votes from the AKP base. Second, Erdogan will obtain a significant amount of votes from the MHP and other smaller Islamist and nationalist parties. There is no other way.

You have to remember that in the March 30 municipality elections, the MHP and CHP combined got 43% of the votes, same as the AKP. Now, if Ihsanoglu’s Aug. 10 vote remains at 34%, as predicted by KONDA, one explanation for the failure would be the shift of votes from the MHP base to Erdogan.

Then, somebody will have to explain why the MHP couldn’t persuade its voters to cast their ballots for the party's candidate, who was chosen in agreement with the CHP. We can do that from now:

The CHP and MHP leaderships achieved a very positive first in Turkey’s democratic history by agreeing on a joint candidate. But, it is not possible to say that they did their part in orienting their constituencies around this partnership or persuading them to vote for this joint candidate.

When the joint candidate was first announced, the allergic reaction from the CHP's secularist base against conservative Ihsanoglu kept public opinion busy for a while. It was assumed that the Sunni MHP base would not object to Ihsanoglu, and they didn’t.

But the MHP leaders had to ease the tensions between the heavily Sunni MHP base and the Alevis who vote for the CHP, which goes back to the covert sectarian clashes of the 1970s that are still felt today. Because this wasn’t done, it is understood that the MHP base in the center of the country could not adapt to a partnership with the CHP.

Erdogan, who knows well the anti-Alevi sentiments in the MHP base, did not hesitate to use it for his election campaign. In his Aug. 2 election rally speech in Izmir, Erdogan said: “[Kemal] Kilicdaroglu [main opposition leader], you may be an Alevi. I respect you. Don’t be afraid of it. Say it openly. I am Sunni and I say it comfortably. No need to hesitate. There is no need to try to mislead the people.”

By asking Kilicdaroglu to reveal his sectarian roots, Erdogan contravened the Turkish constitution, which stipulates, “Nobody can be forced to reveal his beliefs.” He exercised discrimination and sectarianism. Erdogan, by emphasizing the Alevi affiliation of Kilicdaroglu, tried to ensure that people take note of his sect and identify Ihsanoglu as the “candidate of Alevi Kilicdaroglu.”

Three days later in a live TV program, when asked about reactions to his invitation to Kilicdaroglu to reveal his Alevi identity, Erdogan said: "In Turkey, anyone who is a Turk should say he is a Turk, a Kurd should say he is a Kurd. What is wrong with that? They said so many things about me. They said I am Georgian. Excuse me, but they said something even uglier. They said I am an Armenian. But I am a Turk."

To label being Armenian as an “ugly” form of existence, if nothing, is to commit a hate crime, no matter how you look at it.

The remarks of the prime minister should be seen not only as racist and discriminatory blunders but elements of pre-planned political communications. The target audiences are the AKP and MHP voters. These constituencies, as much as they oppose Alevis, are also hostile to Armenians. This toxic tactic of the prime minister may perhaps help him score another election victory. But to further enflame enmities that divide the nation is not going to help Turkey when our Middle Eastern neighbors are burning in the flames of sectarian wars.