Academic Ekmeleddin Ihsanoglu, the opposition’s joint candidate for Turkey’s presidential elections, has the potential to change the game. 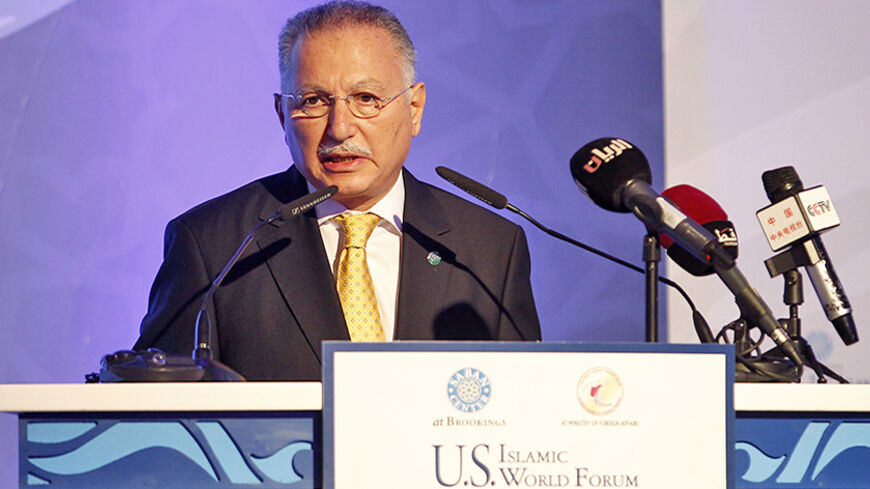 Turkey’s two largest opposition forces, the Republican People’s Party (CHP) and the Nationalist Action Party (MHP), have delivered a big political surprise by nominating Ekmeleddin Ihsanoglu, the former secretary-general of the 57-member Organization of Islamic Cooperation (OIC), as their joint candidate for the presidential elections in August. The decision, announced June 16, caught the overwhelming majority off guard, for Ihsanoglu was never mentioned among possible candidates up to that point and is not even a well-known figure to the masses.

For some hard-core secularists and Kemalists in the main opposition CHP, the surprise came with a negative: Ihsanoglu — an internationally renowned scholar of Islamic culture and science history — is a pious man.

Ihsanoglu’s entry into the playing field should be seen as a development of potentially fateful significance for Turkey. Of course, this depends on his winning the elections by beating the candidate of the ruling Justice and Development Party (AKP) either in the first or second round of the polls.

The AKP’s candidate was not yet officially announced as this article was penned. Yet, up until Ihsanoglu’s nomination, the AKP candidate was expected to be no one else but Prime Minister Recep Tayyip Erdogan, the politician who wields the greatest power and influence and has the widest electoral base in Turkey today.

Erdogan’s political clout is well-known, but one should note that Ihsanoglu is capable of luring support from the AKP base thanks to his background, personality and attitude.

A conservative man of culture who has always shied away from politicking, Ihsanoglu is a devout Sunni Muslim but not an Islamist. A small footnote here: His wife, Fusun, does not cover her head, unlike the overwhelming majority of women in AKP quarters.

Though his ancestors hail from the small, conservative central Anatolian town of Yozgat, Ihsanoglu was born in Cairo in 1943 and pursued an academic career in Egypt, Turkey and Britain. He served 24 years as director-general of the Research Center for Islamic History, Arts and Culture, a body affiliated with what was then the Organization of the Islamic Conference. In 2005, backed by the AKP government, he became the first elected OIC secretary-general, a position he held for eight years. During his tenure, he planned and spearheaded the implementation of reforms aimed at transforming the OIC into an efficient organization compliant with universal norms. Known as an academically independent figure, Ihsanoglu has authored myriad books and articles on science, history and Islamic culture.

In his close circles, Ihsanoglu is known as a person with a balanced, reconciliatory and moderate nature, and as a gentleman. Those features draw up a positive profile, in stark contrast with the bellicose and polarizing character of his potential rival Erdogan.

Ihsanoglu’s nomination is a potential game changer because it offers an alternative to a critical segment of voters in the AKP base who are reluctant to back Erdogan for president but have felt they have no other alternative; now, this group could comfortably vote for a non-Islamist conservative such as Ihsanoglu.

The combined vote the CHP and MHP got in the latest local elections in March is equal to the AKP vote — about 43-44%. Based on these figures, the presidential winner will be decided by the difference between the vote Ihsanoglu manages to muster from the AKP base as well as smaller conservative and nationalist parties and the vote Erdogan will likely get from the Kurdish movement’s grassroots.

CHP Secretary-General Gursel Tekin told Al-Monitor that Ihsanoglu was the sole match for the ideal presidential profile that the party drew up on the basis of extensive consultations with civic groups, trade unions and intellectuals about the qualities of the next president.

In comments about those consultations, CHP Chairman Kemal Kilicdaroglu had said, "The outcome we have reached is that a respectable, clean and honest candidate, to be determined on the basis of a far-reaching consensus by a large part of society, will win the elections. A person with international credibility and respect ascending to the Cankaya Palace will be the right move."

According to information obtained from CHP sources, the person who recommended Ihsanoglu to the CHP leader was Kemal Dervis, the former World Bank vice president and former economy minister who spearheaded the economic program that pulled Turkey out of a severe financial crisis in 2001. Only a few people in the party knew of the proposal to nominate Ihsanoglu for president, and kept it secret until the last moment. Kilicdaroglu took the offer to Ihsanoglu about two weeks ago.

MHP Chairman Devlet Bahceli, in a statement following Ihsanoglu’s announcement as the so-called "umbrella candidate," said, "This consensus, which our nation so needs and insistently calls for, is no doubt a significant step toward restoring peace and stability in the country."

In further comments to Al-Monitor, Tekin voiced optimism that Ihsanoglu could help break the isolation Turkey is facing due to the AKP’s regional policies in recent years. "We have no friend left in the Middle East except terrorist organizations. Mr. Ihsanoglu can play a very significant role in overcoming this problem," he said.

Even if Ihsanoglu eventually fails, his nomination as a joint candidate should be seen as a sign that the Turkish political class is able to compromise on the basis of common values — a significant democratic experience that is a major step forward for the country.