Erdogan as Turkey's next president? Not so fast

Selahattin Demirtas, the People's Democracy Party's candidate for president, may challenge Erdogan and push the election to a second round. 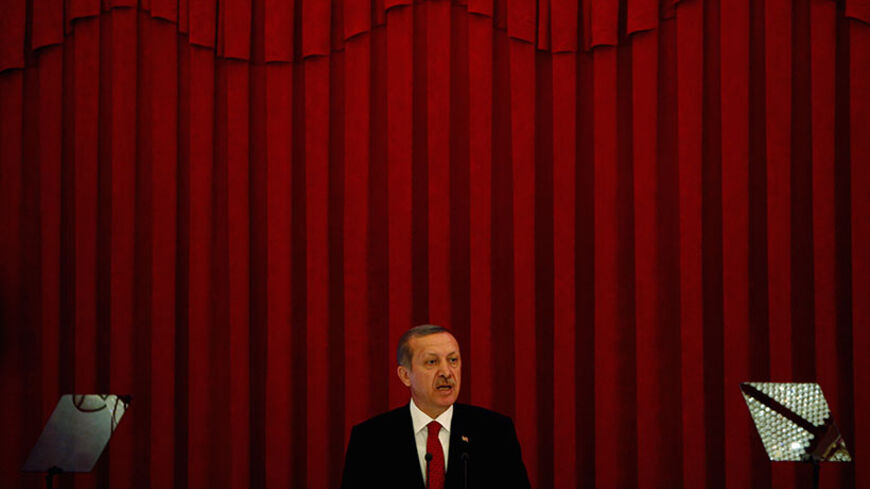 In about a month, on Aug. 10, Turkey will have its first round of a historic presidential election. Historic because this is the first time the president will be directly elected by the people. Previously, the president has been elected to the largely ceremonial office by parliament for a single seven-year term. The new president-elect will have a tenure of five years but with the opportunity for a second term at Cankaya (the neighborhood of Ankara where the presidential residence is located). According to embellished commentaries, this is the first time since the days of the Seljuks and the Ottoman Empire that the Turkish people themselves are going to decide who will rule them.

For many people in and out of Turkey, it is a foregone conclusion that Prime Minister Recep Tayyip Erdogan will become president-elect as a result of the first round vote on Aug. 10. Particularly in the international press, an interesting discussion on the implications of Erdogan’s election is going on. For example, London's Financial Times published an editorial July 7 titled “Erdogan’s Ambition and Turkey’s Future.” And on July 3, the same newspaper devoted a full page to Erdogan under the headline “Grand Ambition.”

The Financial Times’ editorial spoke of what it called Erdogan’s “ambitions”:

“The prime minister has long coveted the position of head of state, believing that it is the ultimate way to shake up the country’s political system.

“He argues that victory would present an opportunity finally to shrug off what he refers to as the ‘era of tutelage’ — the influence of the secularist metropolitan elites created by Mustafa Kemal Ataturk, who formerly ran the republic as of right.

“The prime minister also hopes to shift Turkey from a parliamentary system to one based more on the charisma and political authority of the head of state. It is a vision that alarms his detractors, who increasingly warn of authoritarianism.

“It is up to the electorate to determine whether Mr Erdogan wins the post. But even if he is elected president, it is hard to see how his appointment will change Turkey’s fortunes for the better.”

The Financial Times seemed pretty sure that he will get elected. Here is the concluding assessment of the editorial:

“Mr Erdogan has the numbers to prevail, not least because he retains the support of the Anatolian masses, whose living standards have increased. However, it would be in Turkey’s best interests were he not to win a landslide on the first round, but was at least forced into a more testing contest.

"A bulldozed victory would leave him in charge of a country whose social fabric was fraying along with his reputation — more a Putin than an Ataturk. This Erdogan’s Turkey would not be the country so admired during his first decade as prime minister.”

Despite the overall perception that Erdogan will get elected in the first round, it may not prove to be that easy. The decision taken by the People's Democracy Party (HDP) to nominate its co-chairman, Selahattin Demirtas — an extremely popular young political personality, at least for a large chunk of the Kurdish electorate and Turkey’s democratic, liberal and particularly leftist circles — may require Erdogan to have to also compete in a second round of voting scheduled for the end of August.

Such a forecast depends on simple arithmetic. The March 30 local elections that were considered as “the rehearsal for the presidential election” gave slightly over 43% to Erdogan's Justice and Development Party (AKP), while the combined votes of the opposition Republican People's Party (CHP) and the Nationalist Action Party (MHP) were 44%, and the Kurdish Peace and Democracy Party (BDP) and the HDP got close to 7% combined. Therefore, any repetition of such a voting pattern in the presidential election suggests that Erdogan would need at least 7% more of the vote to get elected in the first round, since the minimum required is 50% plus one vote.

Erdogan can no longer rely on Kurdish votes during the first round, because Demirtas is running against him and the Kurdish political movement is trying to transform the presidential election into a show of force to assert its indispensability to any national, local and regional settlement in the wake of the latest developments in Syria and Iraq.

One HDP official told Al-Monitor that the party expects to get around 10% of the vote, and in nominating Demirtas had in mind attracting the Alevi and discontented constituencies of the CHP.

Discontent looks widespread in certain Kemalist and secularist zealot segments of the CHP because of its nominating Ekmeleddin Ihsanoglu — a former secretary-general of the Islamic Cooperation Organization who is politically considered a conservative — in alliance with the arch-nationalist MHP.

Erdogan’s ardent supporters are counting on the discontent not only in the CHP ranks but also in the ranks of the MHP, which, ironically, do not consider Ihsanoglu to be one of their own.

That means that if the CHP and MHP cannot mobilize their constituencies to go to the ballot box on Aug. 10, any lesser turnout than normally expected will increase Erdogan’s chances to win a majority in the first round.

Nevertheless, I asked the HDP official, who wanted to remain anonymous because of the sensitivity of the matter, if a second round took place between Erdogan and Ihsanoglu, what would be the position of the HPD as a pro-Kurdish party? He responded that the most likely decision would be to boycott the election but without pushing the constituency to abide by the decision. In such a case, 5% of the electorate would refrain from voting but the remaining nearly 5% would divide their votes between Erdogan and Ihsanoglu.

In the meantime, the focus naturally is on the first round, Aug. 10. Recently, a particularly interesting assessment came out of two surveys on the candidates and their chances.

The polls — one conducted by a credible survey institution, Metropoll, and the other by a new company, LRC — said the key handicap of the joint opposition candidate Ihsanoglu appeared to be his low name recognition. According to Metropoll, 32 of 100 people (and, according to LRC, 24 out of 100) know who Ihsanoglu is. But both polls underline the trend of increasing voter preference for Ihsanoglu as his recognition grows. The LRC poll says that of those who say they don’t know Ihsanoglu, 62% prefer Erdogan, while 50% of those who say they do know the joint CHP-MHP candidate without hesitation prefer Ihsanoglu.

In the poll that tried to measure the reaction to the joint candidate, a critical segment of 5.5% to 6% of CHP-MHP voters don’t approve of Ihsanoglu.

Poll results indicate that both the AKP and the HDP are fully supporting their candidate: 89% of the AKP constituency says it will support their party’s candidate. Metropoll said about 3% of AKP voters intend to cast ballots for Ihsanoglu, while the LRC said 6.9% of AKP voters planned to back the CHP-MHP candidate.

According to Metropoll’s findings, if the election had taken place on June 30, the result would have been 42% for Erdogan, 33% for Ihsanoglu, 6.7% for Demirtas and 12% for none of the above; 6% did not respond.

These numbers may have changed slightly in the last week and more changes are likely until election day.

The Aug. 10 results may well require a second round. If that doesn’t happen and if, as both local and foreign forecasts agree, Erdogan wins a first-round majority and becomes Turkey’s 12th president — and the first to be directly elected — then the Financial Times' prophecy would be fulfilled. That is, “a bulldozed victory would leave him in charge of a country whose social fabric was fraying along with his reputation — more a Putin than an Ataturk. This Erdogan’s Turkey would not be the country so admired during his first decade as prime minister.”