Turkish opposition remains in denial of its failed strategies

The Turkish opposition is unable to admit its failures and blames those who did not turn out to vote for the outcome. 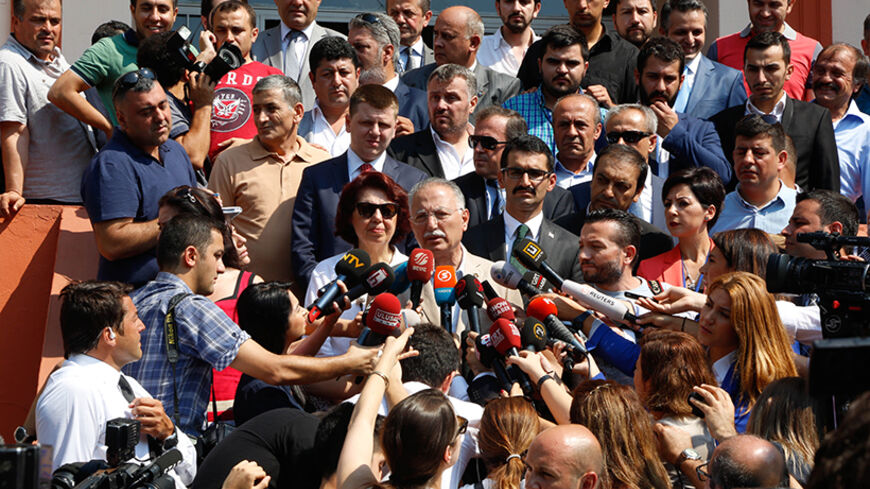 On Aug. 10, Turkish Prime Minister Recep Tayyip Erdogan became the first directly elected president of the country with 51.8% of the vote. While Erdogan consolidated his victory with the support of his loyal constituency, voters opposed to the ruling Justice and Development Party (AKP) policies did not rally behind Ekmeleddin Ihsanoglu, the joint candidate of the opposition Republican People’s Party (CHP) and Nationalist Action Party (MHP). In fact, the two opposition parties saw a significant drop in votes compared with the March 30 local election. In denial that their strategy had failed, CHP and MHP blocs blamed the low turnout of 75% — compared with 89% in March — and the more than 15 million people who chose not to vote in this election as being co-conspirators in taking Erdogan to the country’s highest office.

“If people had bothered to vote, the result of this election would have been very different,” MHP leader Devlet Bahceli said Aug. 10 in an angry tone. CHP leader Kemal Kilicdaroglu echoed the same thing. “If it had not been for vacationers, those boycotting the election and others who did not go to the ballot box for their own reasons, [Erdogan] would not have won that 51% and this election would have gone to the second round,” he said.

Many on social media also feverishly reacted with an insulting and demeaning narrative, arguiing that those who did not vote preferred their summer vacation on the beach to preventing Erdogan from becoming the next president, and that they no longer had the right to speak about the country’s present and the future. However, Adil Gur, head of the Istanbul-based A&G public survey firm, which has built a strong reputation for accurately forecasting election results, disputed this theory. “When you study the results of the polling data, it is outright clear that had turnout been higher, Erdogan would have won the election by a bigger percentage,” Gur told Al-Monitor. “In places such as the Aegean, where the opposition is stronger, for example, 81% of the people voted, which is higher than the national average. Also, there is no difference between the voter turnout of the people in Kadikoy [opposition leaning] or Umraniye [government leaning] in Istanbul. This indicates that the public opinion polls that showed an easy victory for Erdogan prior to the election actually caused the AKP constituency to become complacent — not the other way around.”

IPSOS, another public survey firm, released a detailed report about those who did not vote in this election that backs Gur's argument. A chart based on its data shows a calculation presuming that the 7.7 million people who chose not to vote in the March 30 local election declined to vote again this time around, and apportioning the likely choices of the rest of those who chose not to vote in the presidential election. The chart indicates that Erdogan would have received an additional 2.4 million votes, or 52.7% of this theoretical vote, to Ihsanoglu's 2 million (1.1 million from CHP voters and 900,000 from MHP ones) and Demirtas' 150,000.

Gur and other analysts repeatedly argued prior to the election that the opposition would have had a better chance of forcing a second round of voting if each party had come up with its own candidate.

Ahmet Necdet Sezer, Turkey’s former president, was among those who did not vote. Melih Asik, a columnist at Milliyet daily, reported Aug. 11 that Sezer felt uncomfortable with CHP leader Kemal Kilicdaroglu’s statement that “all will go willy-nilly” to vote for Ihsanoglu. Sezer asserted that the constitution acknowledges people's right to choose to abstain from voting.

Sealing victory at the ballot box for the ninth consecutive time since he came to power over a decade ago, Erdogan received 20,877,185 of the votes in the presidential election, which required an absolute majority to declare victory in the first round. In the March 30 local elections, which followed the 2013 Gezi Park protests and the graft probe that surfaced in December 2013, the AKP garnered 20,520,509 votes, compared with the support of 21,466,446 people in the 2011 general election.

On Aug. 11, Erdogan chaired for the last time the party’s central executive board as prime minister. Party spokesman Huseyin Celik told the media that the AKP would go to its general congress Aug. 27 to determine its next party chairman and prime minister. “We will reach a consensus over that name before heading to the congress,” Celik said. On Aug. 28, Erdogan will officially take over the presidency from Abdullah Gul. Many analysts in the Ankara beltway speculated that Erdogan disqualified Gul from running for the prime minister's post by having the general congress take place a day before he is released from his duties, since he cannot run for party leadership while president, according to constitutional procedures. Foreign Minister Ahmet Davutoglu’s name is appearing as the most likely candidate.

While the opposition rails against Davutoglu, saying his foreign policy is nothing but a complete failure for the country and the region, Erdogan seems to differ with that perception; still, this is not to say that Davutoglu has the prime ministry guaranteed.

What is clear is that Selahattin Demirtas, the pro-Kurdish People’s Democratic Party (HDP) candidate, nearly doubled his party’s vote.

Breaking a taboo by winning the support of the people on the western side of the country, Demirtas received the support of 9.8% of voters, compared with the Kurdish camp's 6% success in the March 30 local election. This could easily help open up possibilities for the CHP in finding an alternative way to address the country’s Kurdish issue and follow a different strategy in the next general election — scheduled for 2015 — if not at an earlier date. Still, as long as the opposition does not persuade the people with a winning strategy at the ballot box, the AKP looks set to remain in power to 2023 and beyond.

Here is a sample view of the vote distribution that clearly shows the opposition’s strategy of trying to take conservative votes away from Erdogan did not work: