There is unrest inside all Turkish political parties, trying to determine their path forward and signaling potential new party formations. 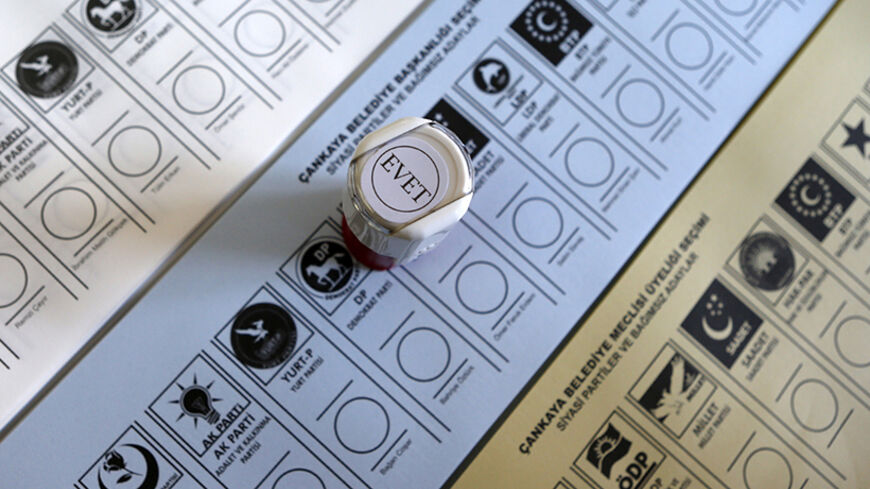 Ballots are seen under a stamp, with the word "yes," at a polling station in Ankara, March 30, 2014. - REUTERS/Umit Bektas

Winning elections for the ninth consecutive time since it came to power over a decade ago, Turkey’s ruling Justice and Development Party (AKP) proved once again with the Aug. 10 presidential election that it has the public support to get what it wants at the ballot box. Prime Minister Recep Tayyip Erdogan has been its pillar; and he now becomes the first directly elected president of the country. With Erdogan moving to the country’s presidential post on Aug. 28, which constitutionally must be a neutral position, he will soon have to technically sever his organic ties with the AKP.

There is an irony there. Since Erdogan declared his candidacy, he has been giving all the signals that he won’t abide by the rule of law by divorcing himself from his party, and that his election means the people's approval of changing the parliamentary system into a presidential one — of course, one unique to Turkey, shaped by Erdogan. All that projection seems to be at risk now, while creating unprecedented opportunities for a reshaping of the political theater here.

First, Erdogan denies he and President Abdullah Gul have any divergent views about the latter’s role in the party once he concludes his tenure. “There is nothing more natural than Abdullah [Gul] to return to his, our party,” Erdogan said at Gul’s farewell reception Aug. 12. “I advise those who like to add irrelevant significance [to our decision holding the extraordinary general congress on Aug. 27] that they better go and bother the CHP [Republican People’s Party] or the MHP [Nationalist Action Party]. They are the ones who need to question what’s behind their failure.”

While Erdogan is right about the opposition, he is not able to silence the Gul supporters in the party. Party insiders who spoke to Al-Monitor expressed sincere disappointment that Erdogan did not say a word of appreciation for Gul while delivering his victory speech on Aug. 10 at his party’s headquarters in Ankara, and with the announcement of the date for the party’s extraordinary congress soon after Gul publicly declared his desire to return to active politics within the ranks of his party. To them, it was a clear signal that Erdogan prefers to sideline Gul.

There is also a growing distrust among Gul supporters toward the Erdogan camp that the more it keeps Gul in the outside circle, without officially recognizing him as the head of the party, the more people will perceive it as an attempt to make him irrelevant to the party’s future. Gul supporters are also quietly in disagreement with Foreign Minister Ahmet Davutoglu’s policies — especially with his positions toward Syria and the radical extremist groups. That leaves Gul and his supporters with two options — either to accept a low profile within the party, or break away to form a new one. “Gul acted with grace at the reception and did not give the impression that he expected more from Erdogan in this round,” one party insider told Al-Monitor. “We all need to wait for a while before eliminating any possibility, or talking about a new party.”

There are also signs of disgruntlement within the CHP. “We lost an election in the first round, which could have been easily taken to the second one,” Emine Ulker Tarhan, a CHP Ankara deputy, said Aug. 12, calling on her party’s leader, Kemal Kilicdaroglu, to resign. “It is to make fun of the CHP [constituency’s] wisdom to depict the result of this election as success, while a candidate supported by 14 parties gathers fewer votes than Erdogan. Kilicdaroglu should step down and we should convene our general congress.”

Tarhan held this news conference at the Turkish parliament with CHP Izmir deputy Birgul Ayman Guler, CHP Eskisehir deputy Suheyl Batum, CHP Usak deputy Dilek Akagun Yilmaz, CHP Istanbul deputy Nur Serter and CHP Mersin deputy Isa Gok. Batum had proposed Tarhan as a candidate for the presidency in June. After heavy pressure, Tarhan was sidelined and Ekmeleddin Ihsanoglu appeared out of nowhere. Hurriyet columnist Yilmaz Ozdil wrote Aug. 13 that the CHP had composed a list of 10 potential presidential candidates that classified how each could keep relations with Erdogan at ease. “Ihsanoglu’s name was not among them,” Ozdil wrote, wondering how Ihsanoglu became the joint candidate, and why the CHP felt the need to prioritize a good standing with Erdogan.

Tarhan stressed that the party made a huge mistake by playing the conservative card and attempting to digress from its values. She also warned against the threat posed by the radical extremist Islamic State (IS) at Turkey’s doorstep and the speculation that the government sponsored these terrorist groups.

Muharrem Ince, CHP Yalova deputy and parliamentary group deputy chairman, was also considered as a potential presidential candidate. The speculation in the Ankara beltway is that Ince will resign from his duties Aug. 14, posing a direct challenge to Kilicdaroglu.

CHP spokesman Haluk Koc, however, on Aug. 13 discreetly invited Ince and Tarhan's group to resign from the party. While Tarhan’s group is considered new to the party establishment, Ince is accepted as an old-timer. CHP insiders speaking to Al-Monitor expressed a certain level of shock that Koc approached them in the same manner without making any distinction between them.

While it is widely speculated that the dissident voices will not be able to collect enough signatures to convene an extraordinary general congress to change the party leadership, the rumors are mounting hinting at various possibilities — including that unless these voices’ concerns are not answered, they could split away to form a new party. Kilicdaroglu admits that the party was not successful in the election, but blames the dissident voices for not providing enough effort to help Ihsanoglu to get elected. “To be a member of a party means to implement and follow the party decisions. Those friends who held the press briefing did not work at all during the election,” He added, “They are not sincere. But if they gather enough signatures, we will certainly go to the party congress.”

MHP leader Devlet Bahceli is the most assertive one in controlling his party members. Like Erdogan, whose dictatorial hegemony over his party members has been preventing any free expression or dissent from the party leadership, Bahceli has not allowed even a debate about his success as the party chairman for almost 15 years. When he was asked Aug. 13 whether he considered resigning, Bahceli said, “Do you want it so much? Don’t follow Recep Tayyip Erdogan’s wishes. We are in charge of our duties.”

The wild card here remains Selahattin Demirtas, the pro-Kurdish People's Democracy Party (HDP) candidate who nearly doubled the Kurdish vote compared with the March 30 local elections. Being the least advantaged in this campaign process, Demirtas was able to perform beyond expectations, winning some CHP votes. Melda Onur, CHP Istanbul deputy, in fact wrote in her tweets Aug. 12 that Demirtas came out of these elections as the new leader of the left.

If Demirtas can build upon this unprecedented success and make his party pass the 10% threshold to be represented at the Turkish parliament in the next general election — scheduled for 2015 — the new AKP (whomever its leaders) will lose seats. Yet, this tense environment in the Ankara beltway seems to be pregnant with the possible establishment of new parties breaking off from the AKP, CHP and MHP. And that says, if nothing else, that Erdogan won’t have a smooth presidency.