Republican People's Party deputy Emine Ulker Tarhan’s resignation from her party raises the possibilities of a new party in Turkey. 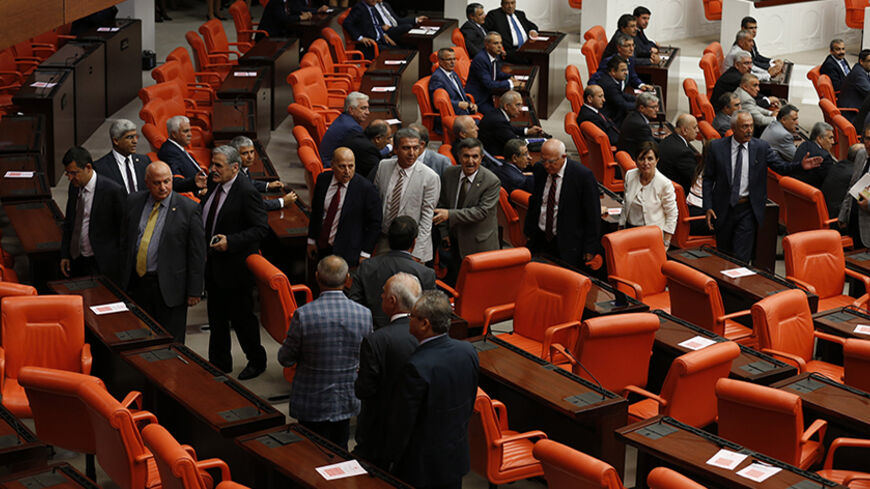 Members of parliament from Turkey's main opposition Republican People's Party walk out during the inauguration ceremony of President Recep Tayyip Erdogan at the parliament in Ankara, Aug. 28, 2014. - REUTERS/Umit Bektas

Turkey’s opposition parties have mastered griping about the ruling party’s mismanagement for over a decade, but they remain at a loss about how to become a driving force in the country. They mostly appear as weaklings, instead of strong politicians focused on creating a picture of the country becoming a better place under their governance.

Emine Ulker Tarhan, the deputy chairwoman of the parliamentary group of the main opposition Republican People's Party (CHP), said she had had enough, and announced her resignation Oct. 31. “As I reached the conclusion that the CHP leadership will continue to insist on offering an opposition with ambiguous policies shaped by fatal choices disconnected from our people’s sensitivities, I am resigning from the CHP that I had joined with high expectations as I do not wish to be a further part of wrong and weak policies that are not directed at creating a sense of hope and oriented toward the goal of putting the party into power.”

Even Turkish Prime Minister Ahmet Davutoglu praised Tarhan for what she had written in her resignation letter, while overlooking her sharp criticism of his policies. “She says that the CHP has no hope of coming to power,” Davutoglu said Nov. 1. “They don’t indeed appear to have hopes of coming to power. There is no debate, either in Turkey or in the world, that Turkey’s future won't be shaped by the AKP [Justice and Development Party].” Time will only tell whether Tarhan’s resignation will spark a drive to establish a new party; however, her close party colleagues have not followed her footsteps.

Tarhan is considered a staunch Kemalist, someone dedicated to uphold the principles of the country’s foundational goals. In a sharply polarized nation such as Turkey, however, no two heads even easily agree on anything. Religiously motivated crowds, or those who put Kurdish suffering at center stage, could surely propose a more coherent social and political map, though. What's baffling is why anyone considered a Kemalist or religious does not have sympathy for Kurdish suffering, or why a Kurd does not feel a sense of loss over the fading ground of secular governance. It is not an easy time for remaining true to one’s self, and Tarhan is certainly a character with sharp edges.

Her party members showed her off as a potential presidential candidate before the CHP announced, in a rather surprising way, that it was backing Ekmelleddin Ihsanoglu. Tarhan was quick to object to his candidacy as contradicting the party's values and announced it as a hopelessly opportunistic act by party leaders aiming to grab conservative votes. She was proven right at the ballot box. Ihsanoglu lost the election despite having the support of more than a dozen political parties.

“The party should have firmly made the point that we are not small in numbers in this country. Because I really don’t want to see our constituency heading to the polls being dismayed and voting for those they really did not have in their hearts,” she said July 2, more than a month before the August presidential election.

Tarhan’s supporters loved her boldness, seeing her with her loosely tied blond hair with no makeup. She appeared sincere, but tough. When CHP leader Kemal Kilicdaroglu learned of her resignation, he only left it at wishing her well, dismissing her implication that he should have volunteered to vacate the chairmanship long ago. When the CHP held an extraordinary council meeting after the presidential election, Tarhan gave all the signals about how displeased she had been about the party's inner workings. Still, she did not run against Kilicdaroglu, nor did she extend her support to Muharrem Ince, who ran and lost.

Tarhan complained in her written resignation that the party leadership dismissed her calls for working on a real road map preparing the party for elections, and stressed that the 2015 general election carries the utmost importance for the younger generation’s future as the country is at a war threshold with its ambiguous Syria policy being challenged and domestic unrest.

In any case, Tarhan has brought about an opportunity of change for those who would like to take a step forward to break the failure of this wrecked opposition at the ballot box. Just like the wind behind the Gezi Park protests, her courage could possibly fall flat in terms of producing change.

Yet, the opposition ideally will finally get it one of these days: that endless griping is not the best method for achieving victory.