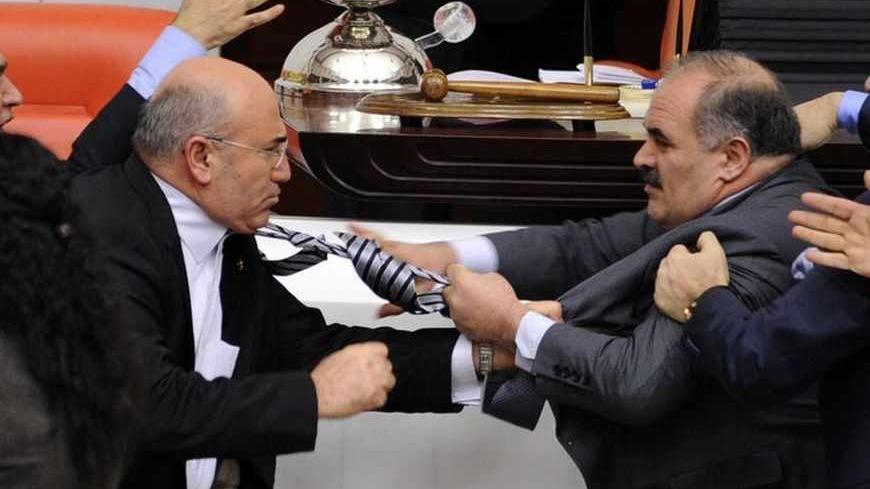 Normally, it would be deemed scandalous in any democracy when state authorities attempt to intimidate opposition parties, but here in Turkey, such scandals have become so internalized — and the people so polarized — that they have little impact on the electorate.

The latest scandal was brought to public attention on Tuesday, Aug. 13, with a headline on the front page of Hurriyet: “Here are the CHP's index-card files.” CHP is the Turkish opposition Republican People's Party. Veteran journalist Sukru Kucuksahin broke the news. “CHP leadership is shocked by the discovery of index-card files for 15 of its deputies and local administrators,” the subheadline read. The newspaper printed a copy of some of those files for Emine Ulker Tarhan, Kamer Genc, Huseyin Aygun, Levent Gok, Ilhan Cihaner, Nihat Matkap, Fuat Cay and Mevlut Dudu.

The files included information on these CHP deputies’ educational backgrounds, as if this was not already public information.

In Turkey, when people run for office, they must show electoral officials proof that they do not have a criminal record. But Ilhan Cihaner was painted in his index cards as if he “aided the outlawed Kurdistan Workers' Party (PKK) in the Black Sea region of Samsun while he was serving as the public prosecutor.”

The files for Emine Ulker Tarhan presented her meetings with foreign diplomats as if it is something surprising for a deputy to meet with members of international organizations. “She held meetings with the International Republican Institute (IRI), Heinrich Boll Foundation, and STRATFOR,” it wrote.

CHP leader Kemal Kilicdaroglu directly blamed the Justice and Development Party (AKP) government for this intimidation. “I have said it before that [Turkish Prime Minister Recep Tayyip] Erdogan has completely taken over the state, and now he is targeting the CHP. This is the point where we are now,” he told Hurriyet. “[The AKP] can’t tolerate the opposition. They have set the state institutions after the main opposition. I want everyone to know how grave the situation is.”

He went on to say, “It’s wrong for intelligence and police organizations to gather unlawful information about the opposition and deliver it to Erdogan in an effort to keep [the CHP] under close surveillance, direct [the developments accordingly], and control it.”

Kucuksahin reported that Turkey’s National Intelligence Organization (MIT) categorically denied having played any role in collecting information about the CHP deputies and its local administrators.

Hurriyet also reported on Aug. 14 that the CHP was shocked to discover once again that a conference room at one of its Istanbul branches was bugged. A bugging device was discovered underneath a chair in a conference room where just yesterday three deputies attended an important meeting. In addition, the residences of several CHP deputies have been broken into. The circumstances of the break-ins are suspicious since the burglars don't really steal anything substantial, just some party paperwork.

The story resembles the famous Watergate scandal, when, on June 17, 1972, five burglars linked to Republican President Richard Nixon’s re-election campaign broke into Democratic National Committee headquarters in Washington. Police caught the five burglars in the act and then arrested them. The Watergate scandal transformed into a constitutional crisis not simply because of the burglary, but because of the White House's subsequent cover-up and its implications for government accountability.

Despite the importance of this news, no one from the AKP commented publicly on the matter. It was also quite striking that the opposition-leaning Cumhuriyet’s columnists were the only ones to write about the subject today, while the rest ignored the news. The state-owned Anatolian Agency did not even report the story at all.

“After the Gezi Park protests, the AKP government became so fearful that it implemented a ban on political slogans at soccer games to prevent these protests from growing further, and now the keeping of index cards for CHP deputies show that the silencing efforts of the people is going to be stepped up,” wrote Ozlem Yuzak in Cumhuriyet on Aug 14.