Will CHP face its dark past?

For the Republican People’s Party (CHP) to become a real alternative to the Justice and Development Party (AKP), its leader, Kemal Kilicdaroglu, should start an honest dialogue about the party’s past. 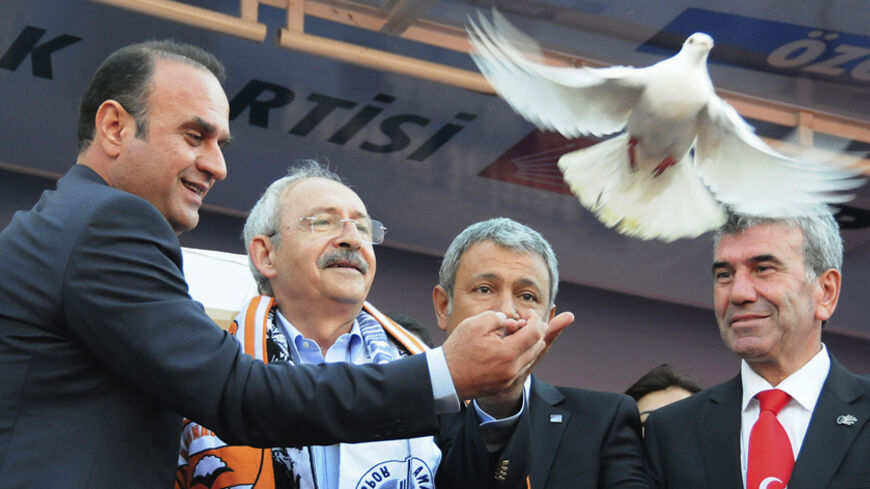 On Nov 12, Sezgin Tanrikulu, deputy chairman of Turkey’s main opposition Republican People’s Party (CHP), unwittingly initiated a controversy in his party. On a popular political talk show on CNNTurk, Tanrikulu spoke about the “Dersim massacre” of 1937-38 and “apologized” for this incident “on behalf of my party.” The next day, various deputies from the CHP slammed Tanrikulu, arguing that there is nothing to apologize for or that there is nothing about Dersim that should bother the CHP. This debate is not just about the past, but also the future of Turkey’s main opposition party, so it deserves a closer look.

Dersim was a province in the Ottoman Empire and then in republican Turkey until 1935, when it was renamed Tunceli. That was also the year when the Turkish republic, under the “single-party regime” of Mustafa Kemal Ataturk and his CHP, initiated a “resettlement plan” to subdue the rebellious tribes in this mountainous region. The next three years brought growing tension and ultimately armed conflict between government forces and armed rebels.

The government's methods were reportedly brutal, including mass killings of civilians, razing of homes, and use of poisonous gas. The area was also bombed from the air. One of the pilots who joined the mission was Sabiha Gokcen, the adopted daughter of Ataturk, whose name is kept alive today through Istanbul's Sabiha Gokcen International Airport. The number of deaths in Dersim has been disputed, with estimates ranging from 7,000 to 40,000.

The tribes of Dersim, who paid heavily for their “rebellion,” were Kurdish in ethnicity and Alevi in religion. In other words, they were a double minority in predominantly Turkish and Sunni Turkey. That is why many of the Dersim survivors perceived their oppression as part of the centuries-long Sunni-Turkish oppression of Alevis and Kurds. Others pointed out, however, that the republican regime that persecuted the people of Dersim was in fact dominated by none other than Ataturk’s all-secular CHP and its long-time ideology, Kemalism.

This is why the critique of Kemalism — which has found itself on safer ground since 2002 under the Justice and Development Party (AKP) — included a rediscovery and a revision of the Dersim story. In 2011, Prime Minister Recep Tayyip Erdogan took a brave step in apologizing “on behalf of the state” for the Dersim massacre during a televised meeting of his party. Liberals applauded Erdogan for breaking the taboos of a republic that has always been unabashedly self-righteous.

Of course, Erdogan’s Dersim apology had a political rationale as well. He was apologizing for the misdeeds not of his own Islamist political tradition, but of his secularist opponents. The same Erdogan never offered an official apology for the misdeeds of his own administration, such as the accidental bombing and killing of 33 Kurdish civilians on the Turkish-Iraqi border in December 2011.

Meanwhile, the CHP remained defensive, or at least silent, about the Dersim massacre. To raise this issue is inevitably to question Ataturk, the founder of both the republic and the CHP and who is still largely considered sacrosanct and whose persona has even been protected by the law. That is why although more liberal voices in the CHP who identify themselves as “social democrats,” such as Tanrikulu, can accept the Dersim massacre as one of the original sins of the republic, while self-declared Kemalists still defend it as a necessary operation to restore “state authority.”

No wonder some of them also agree with the Bashar al-Assad regime in Syria and its brutal methods.

One such voice is Birgun Ayman Guler, CHP deputy from Izmir and one of the staunchest members of the party’s Kemalist faction. In a recent piece in Aydinlik, a hard-core Kemalist daily, she condemned the “apologetic” stance on Dersim, with an implicit reference to Tanrikulu. This amounted, she argued, not to morality, but to “surrendering to the global colonialism age of imperialism.” The “neo-liberal order,” she said, was trying to make Turkey “apologize first, and then kneel down.”

Such xenophobic nationalism is widespread in Turkey and can be found among almost all the political parties. That it is so powerful within Turkey’s main opposition, which is supposed to bring fresh perspectives against the AKP’s 12-year reign, keeps the party looking archaic, illiberal and unpromising.

Yet, the gap is growing between the CHP’s social democrats, who apparently have the blessing of the party leader, Kemal Kilicdaroglu — who, by the way, is from Dersim — and the Kemalists. One prominent name in the latter camp, Emine Ulker Tarhan, recently resigned from the CHP and announced that she will form a new party.

The risk for the CHP is that Tarhan's new party or any other Kemalist offshoot might siphon off a sizeable chunk of CHP voters at a time when the party is desperately trying to enlarge its relatively modest base in the face of the AKP behemoth.

The loss of the hard-core Kemalist faction, however, might also be the price the CHP has to pay to appeal to a larger block of voters. This is precisely what the AKP successfully did in the early 2000s, when it broke from the hard-core Islamists to appeal to the broader masses.

For the CHP to become a real alternative to the AKP, Kilicdaroglu should empower the social democrats, such as Tanrikulu, and open an honest dialogue within the party about its 90-year history. Although there would be episodes in that history that party members can still feel proud about, such as the willing transition to multiparty democracy in 1950, there are also dark episodes, such as the Dersim massacre, that beg for their self-criticism and apology.