Turkey’s next election could shape more than next four years 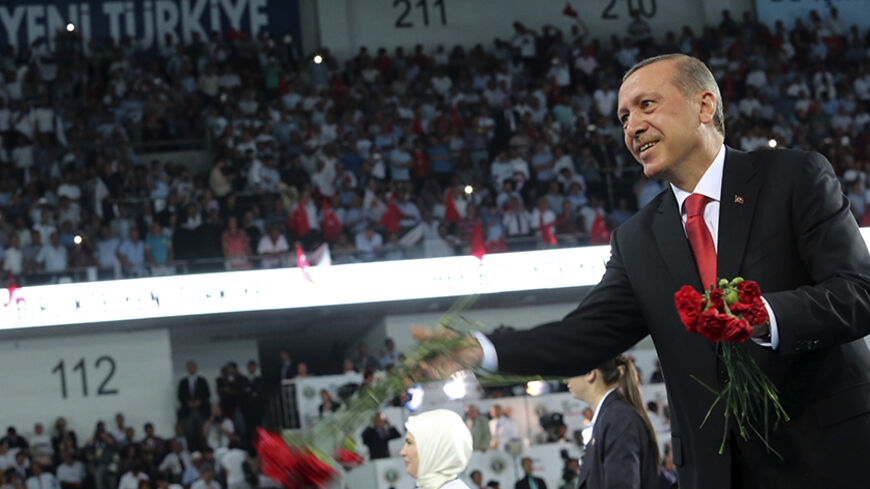 Turkish Prime Minister Recep Tayyip Erdogan throws flowers to his supporters upon arriving at a meeting of the AKP to choose a new leader of the party, ahead of his inauguration as president, in Ankara, Aug. 27, 2014. - REUTERS/Rasit Aydogan

With the August presidential election and March local election already passed, the June 2015 general election will be Turkey's last until 2019. Coming when Turkey's political system is on the brink of profound change, that election could define much more than the next four years.

President Recep Tayyip Erdogan has been proposing to change the parliamentary system into a presidential one. According to Article 175 of the constitution, the draft proposal to change the articles of the constitution can only be accepted by a three-fifths majority (330) of the total number of seats in the parliament by secret ballot. Then, the parliament speaker sends that approved draft to the president to be approved and published in the Official Gazette, making it the law of the land.

While the Justice and Development Party (AKP) has been victorious in all elections since coming to power a decade ago, the party lost some seats in the last election, lowering its current total to 312.

Ersan Sen, an Istanbul-based law professor, told Al-Monitor that even though the AKP may not win enough seats to make constitutional change by itself in the parliament, it can still build alliances with the pro-Kurdish People’s Democracy Party (HDP) to reach that crucial number. “However, it’s impossible to make any changes to the constitution or to take any draft proposal to referendum without the exact number of parliamentarians noted in the constitution,” Sen said.

The AKP government kick-started the Kurdish peace process over two years ago. Although the process faced many ups and downs, it is still somehow progressing and therefore the government continues to receive the empathy of the Kurdish population for its stance. This, as a result, makes it reasonable to speculate that a potential AKP victory in next year’s general election as a single-party government for the fourth consecutive term could make it possible for the HDP to join forces with it to change the constitution. Although no one knows exactly what that new constitution will look like, it is likely that it may propose strengthening local governance in return for granting Erdogan his desire for a Turkish-style presidential system.

The opposition remains in disarray. Kemal Kilicdaroglu, leader of the main opposition Republican People’s Party (CHP), for example, has claimed that the AKP has ordered the formation of a special unit within the country’s intelligence institution, known as MIT, to plot against the CHP and undermine its image and credibility in public.

“As you know, MIT was formed in compliance with the law. The Gestapo was also established by law,” Kilicdaroglu said. “What was the Gestapo’s main function? To serve the German government rather than the interest of the nation. I just want MIT to act in accordance to its legal framework and abide by its role of representing the whole nation rather than taking the side of a political party, engaging in internal debates and operations. It should not attempt to take action against the CHP on instructions from the ruling party.”

However, Riza Turmen, a CHP Istanbul deputy, disregarded his leader’s allegation. “We have enough of our own conflicts within the party,” he said Nov. 21. “I really don’t know whether we need MIT to make things further conflicted.”

The CHP has indeed failed the people in projecting a vision that it could do better once in power. The failure to create that perception in people’s eyes and to the failure to create its own agenda makes it even more difficult for this party to persuade the people that the differences among its own members are something normal in any democracy. The more the AKP puts the CHP on the defensive, facing its old demons from the early stages of the republic, the more the nationalist and hard-core secularist members in the party are singled out as troublemakers.

Emine Ulker Tarhan, who resigned as a CHP deputy and led the establishment of the new Anatolia Party, spoke about that dilemma.

“Show me one person among the CHP management who believes that the CHP will win the 2015 general election and form the government,” Tarhan said Nov. 24. “If the party is getting divided, everyone knows whose responsible for it. … While Turkey is going through an exceptional era, while the AKP is trying through all its means to change the constitution and take its revenge from the Republican era, there must be something going wrong with the opposition if it ends up complaining about failing to provide unity within its own body and screams out loud that there are those out there trying to divide it. They need to show their power against the [AKP] not against the members of the [CHP].”