What sort of parliament awaits Turkey after the election?

Even slightly disparate results in Turkey’s June 7 election could take the country in different directions. 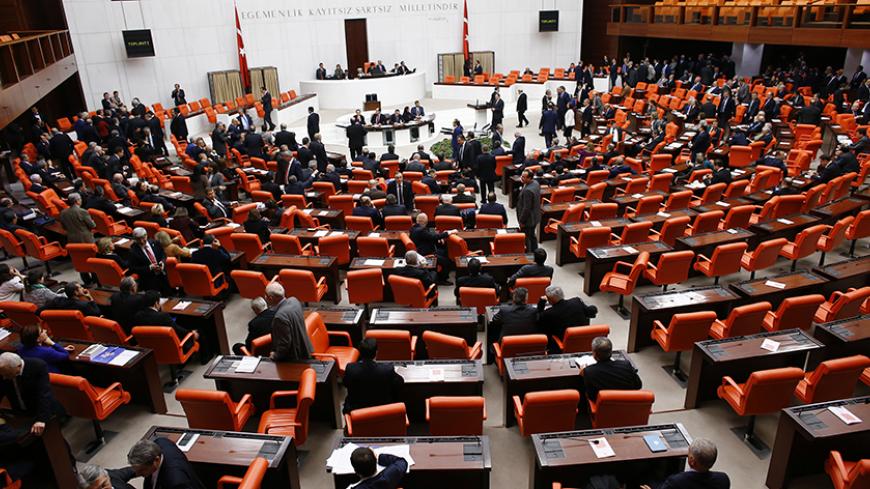 Much has been written about the June 7 election in Turkey. Some of the best analyses on the election’s various dimensions appeared here on Al-Monitor, helped by more comprehensive reports elsewhere.

Semih Idiz discussed whether the course of Turkish foreign policy could change after June 7. Pinar Tremblay inquired why the ruling Justice and Development Party (AKP) is running a negative campaign and losing support from Kurdish voters. Amberin Zaman wrote about how President Recep Tayyip Erdogan's dreams of creating a “Turkish-style presidency” could flounder. Mustafa Akyol discussed the AKP and Prime Minister Ahmet Davutoglu’s heavy use of religious symbolism to hedge their bets. Cengiz Candar commented on the violence directed against the Peoples’ Democratic Party (HDP), which is succeeding in attracting votes from outside of its traditionally Kurdish base. And Kadri Gursel covered the disturbing but real possibility of electoral fraud and what civil society groups in Turkey are doing about it.

But how will the actual result of the election on June 7 affect seat configurations at the 25th Grand National Assembly of Turkey (TBMM) that will serve through 2019?

To grant Erdogan’s wish to create a “Putin-style presidency” for its former chairman, the AKP must garner at least 330 of the 550 seats at the TBMM to amend the constitution through a popular referendum. To pass its amendments directly, the ruling party needs a two-thirds majority of 367 deputies — a number it could not reach on its own. Under the Turkish Constitution, a political party needs at least 276 seats in parliament to form a single-party Cabinet without a coalition partner.

Interestingly, the AKP — the party poised to win a plurality of the votes — faces the gravest threat from the HDP, the smallest opposition party. Because the AKP is the only other party that is competitive in southeast Turkey, it would automatically get most HDP seats if the latter were to receive less than 10% of the national vote. If the HDP passes Turkey’s extremely high 10% national threshold, it would deny the AKP between 53 and 57 seats.

But it would be unwise to celebrate Erdogan and AKP’s first electoral defeat just yet: Even a slightly disparate change in votes could lead to different configurations at the TBMM. If the HDP fails to pass 10% on June 7, even with the main opposition group Republican People’s Party (CHP) and the Nationalist Action Party (MHP) winning 30 and 20%, respectively, the AKP could secure a simple majority of 276 seats in parliament with just 38% of the vote. If the ruling party’s percentage falls to or falls below 37% — which is unlikely — and the HDP does not pass 10%, only then would the CHP and MHP have enough seats to form a coalition government.

To get at least 330 seats at the TBMM to pass its constitutional amendments, the AKP would need a minimum of 41% of the popular vote — provided HDP does not reach 10% and the CHP and MHP win 28 and 14%, respectively. If the HDP does pass 10%, the CHP and MHP should receive 24 and 12% to the AKP’s 52% for the ruling party to reach 330 seats — also an unlikely outcome.

We should note that vote percentages seldom translate into clear-cut numbers at the parliament. Turkey uses a system of proportional representation where candidates enter parliament based on how their party performs at their district. Parliamentary elections in Turkey are contested at a total of 85 electoral districts. Istanbul is divided into three regions, Ankara and Izmir are composed of two electoral regions and the rest of the country’s 78 provinces are each counted as an electoral region in their own right.

With more than 53 million voters spread across 85 electoral districts in 81 provinces, an average of 97,000 constituents corresponds to one deputy. But because smaller provinces are guaranteed at least one deputy, they have a substantial advantage over larger provinces. For example, 27,089 voters are represented by one deputy in Bayburt, but it takes 118,669 voters to elect one deputy in Izmir. So if the HDP were to gain 10%, it automatically would not translate into 55 seats at the TBMM — performing well in smaller provinces could bring a few more deputies (or vice versa). Or if the AKP loses some votes in Istanbul, Ankara and Izmir, but performs better (as it usually does) in smaller provinces in central and eastern Turkey, it would still retain a majority in parliament.

So with these scenarios, observations and facts in mind, what sort of a parliament awaits Turkey after June 7?

According to an online simulation, KONDA’s scenario would mean 277 deputies for AKP, 143 deputies for CHP, 68 deputies for MHP and 62 deputies for HDP. In other words, the ruling party would form a single-party government, but Erdogan would have to kiss his dreams of a “super-presidency” goodbye (all opposition parties are against the idea).

Such an outcome would be the most ideal case for Turkey under the circumstances. The AKP might engage in soul-searching and hopefully revive its reformist and all-embracing spirit of 2002-2007. While it is unlikely that Erdogan simply would back away from his divisive rhetoric that hurt the country for a long time, his party’s weakening may force him to accept his role as described in the Turkish Constitution. The CHP and MHP could realize that voters respond to positive campaigns and think more seriously about winning in 2019. The HDP’s entry into parliament on its own would mean that Turkey finally has come of age and is ready to discuss its Kurdish question maturely.