Turkish civic groups such as Vote and Beyond prepare for stringent monitoring of the June 7 elections, given that even minuscule vote-rigging could have a huge impact on the country’s future. 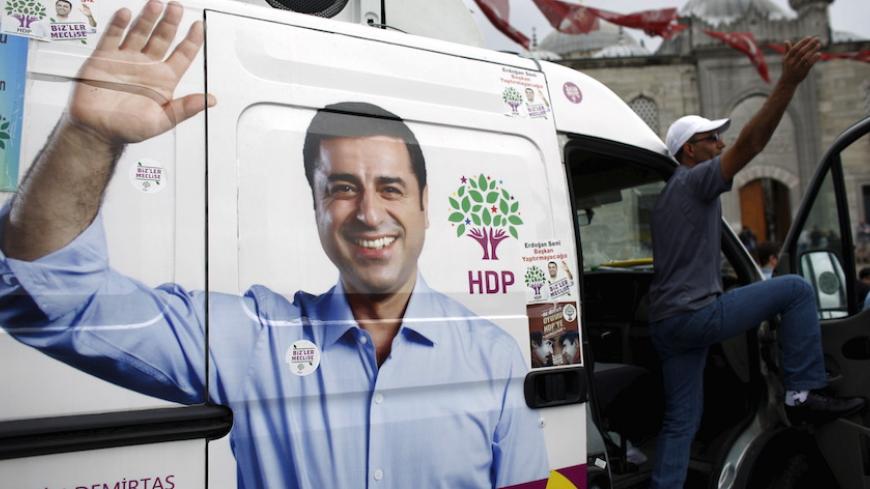 A supporter of pro-Kurdish Peoples' Democratic Party stands on an election campaign minibus with a picture of the party's co-chair Selahattin Demirtas on it, in Istanbul, May 28, 2015. - REUTERS/Murad Sezer

As Turkey’s June 7 general elections draw near, the fate of the ruling Justice and Development Party (AKP) and President Recep Tayyip Erdogan hinges on whether the Peoples’ Democratic Party (HDP), an offshoot of the Kurdish movement, will overcome the 10% national vote threshold to enter parliament.

The outcome of the HDP struggle with the world’s highest threshold lies at the heart of all scenarios for the AKP, both positive and negative. One of the best scenarios for the ruling party is to clinch a three-fifths parliamentary majority, or at least 330 of the 550 seats, which would allow it to rewrite the constitution unilaterally in line with Erdogan’s ambitions for an authoritarian executive presidency and take the draft to a referendum.

Due to the intricacies of Turkey’s electoral system, the HDP’s failure to pass the threshold and enter parliament would mean a huge boost for the AKP, as it would take over the seats the HDP would have won in the Kurdish-majority east and southeast, where the ruling party is the HDP’s only rival. Thus, by grabbing the HDP seats, the AKP would have the opportunity to secure more than 330 seats.

This scenario, however, has increasingly waned over the past several weeks as almost all opinion polls point to a decline in AKP support. The party, which won 49.9% of the vote and 326 parliamentary seats in the 2011 polls, is now down in the 40-42% range. This means the AKP would fall short of 330 seats even if the HDP flops at the threshold and loses its seats to the ruling party.

Yet, the HDP’s showing remains a critical matter. Its failure or success at crossing the threshold is key to whether the AKP can secure the simple 276-seat majority to continue ruling Turkey as a single-party government. With about 40% of the vote, the AKP risks losing its parliamentary majority if the HDP passes the threshold.

To complicate things further, the HDP’s prospects of passing the 10% benchmark remain uncertain. According to opinion polls, support for the HDP ranges between 10% and 11%, but given error margins, this cannot be taken for granted either. Decimal fractions of less than 1% may eventually push the HDP over or under the threshold, meaning that minuscule shifts in the vote could seal the AKP’s and Erdogan’s fate and sway the course of the whole nation.

Because of this nail-biting equation, an accurate count of the vote the evening of June 7 has become crucial for Turkey’s and the region’s future. Remarkably, a significant part of the Turkish public expect irregularities in the count, or, to put it plainly, vote-rigging.

A survey made public May 5 by Koc University academics Ali Carkoglu and Erdem Aytac provided a striking illustration of how popular confidence in fair elections has eroded. According to the survey, which canvassed 2,201 people in 49 provinces from March 19 to April 26, 46% of voters are convinced the ballots will not be counted properly. The figure stands at 15% even among AKP supporters and reaches up to 72% among opposition voters. Similarly, 43% of the electorate believes the June 7 elections will not be fair. The party breakdown shows that 11% of AKP backers and 69% of opposition supporters hold this opinion.

Similar surveys ahead of the 2007 general election found that 28% of voters believed the polls would not be fair; the figure was 30% in 2011. A 13-point increase four years later sounds a serious alarm.

Murat Karayilan, executive council member of the Kurdistan Communities Union, the Kurdish movement’s illegal umbrella organization, was the latest to charge that the AKP would rig the elections. “I don’t think the HDP could surpass the threshold with 10.5% or 11% of the vote because they [the government and its supporters] will be cheating. They will be invalidating votes or stealing votes,” Karayilan said, speaking from the Qandil Mountains in northern Iraq, where the armed Kurdistan Workers Party is based. The HDP, he added, has to secure about 12% or 13% of the vote to make sure it passes the threshold.

Most recently, the municipal elections on March 30, 2014, were marred by allegations of vote-rigging. The main opposition Republican People’s Party (CHP) filed objections to the results in Ankara after its candidate for mayor lost narrowly to the AKP’s Melih Gokcek in controversial circumstances. The Higher Electoral Board, which runs and supervises the polls, rejected the objections, but the CHP still insists that the vote was rigged extensively through various means, including the falsification of counting reports from balloting stations.

Democracy’s Overseers, a nongovernmental group, has penned a booklet called “The Manual of a Vote Thief” to raise awareness about the most widespread means of electoral fraud in Turkey, which include:

According to Democracy’s Overseers, the opportunity for vote theft emerges mostly during the counting and recording of the votes. During this process, polling workers are able to invalidate the votes of rival parties or record them in the name of another party.

“Power outages during vote counting” is another fraud method the group describes. Multiple, simultaneous power outages became a hallmark of the 2014 municipal polls, going down in Turkish political history as the “cat in the transformer” incident. While vote counting was underway in the evening of March 30, simultaneous power cuts hit 35 provinces across Turkey, including Istanbul. Two days later, Energy Minister Taner Yildiz went down in history by claiming that a cat had slipped into an electrical transformer unit, causing a short-circuit failure. “Cats” have since become a sarcastic metaphor for vote theft in opposition jargon.

Opposition parties, especially the CHP and the second-largest opposition force, the Nationalist Action Party, have long been under fire for failing to ensure the security of ballot boxes. As a result, civic society has become increasingly mobilized against electoral fraud, especially since the 2013 Gezi Park protests.

A striking example of this activism is the Vote and Beyond movement, launched in 2013 by eight young people, all of them Gezi protesters, to “raise awareness on transparent and democratic elections.” The movement made its name during the 2014 municipal elections when it deployed 30,000 volunteer observers at polling stations across the country.

For the June 7 elections, Vote and Beyond plans to mobilize up to 70,000 volunteers to monitor vote counting at 106,000 ballot boxes in 162 districts in 45 of Turkey’s 81 provinces. The 162 districts include the country’s 100 largest districts and 62 districts where the margin between the first and the second party is less than 3%. In other words, those are the districts where electoral fraud could sway the overall outcome.

In an interview with Al-Monitor, Sercan Celebi, the chairman of the Vote and Beyond Association, recounted how the movement was born.

“We were all part of the resistance at Gezi Park on the night of May 31, 2013. We realized that unless we take action, this state of passivity is taking us to the edge. The Gezi [events] stripped us of any excuse for passivity. We realized our numbers were larger than we imagined. Then, we, eight people, came together. We channeled this energy to create Vote and Beyond. We wanted to convert the Gezi energy to an immediate project and transform the ability of joint action into a lasting success story. Thus, we began thinking how we could ensure the vote security, which has been an acute problem. The Gezi [protests] produced two results: The first is the [saving of the] park — it’s still there. The second is Vote and Beyond. We are not living in an established democracy, and democracy in this country will not establish itself by itself.”

Celebi stressed that Vote and Beyond volunteers will be able to watch only the vote-casting and counting process, which is the observable part of the election, taking place at 175,000 ballot boxes in 970 districts across the country. The process of entering the counts into the centralized computer system and the announcement of final results is not open to observation. To compensate for that, the group has prepared its own software, a sophisticated program of cross-checking and control, which will be used to compare the official results and the results the group will collect through its observers.

Rigging just 1% of the vote could well leave the HDP out of parliament and put Turkey on an extremely alarming course. Thus, preventing even minuscule fraud, on decimal fractions of the vote, is now more important than ever for Turkey in the June 7 polls.