Win or lose, Turkey's Kurds will advance in June elections

Turkey’s main Kurdish-dominated party could deal a serious blow to the ruling Justice and Development Party if its efforts at attracting broad support succeed in helping it surpass the 10% voting threshold in the June general elections. 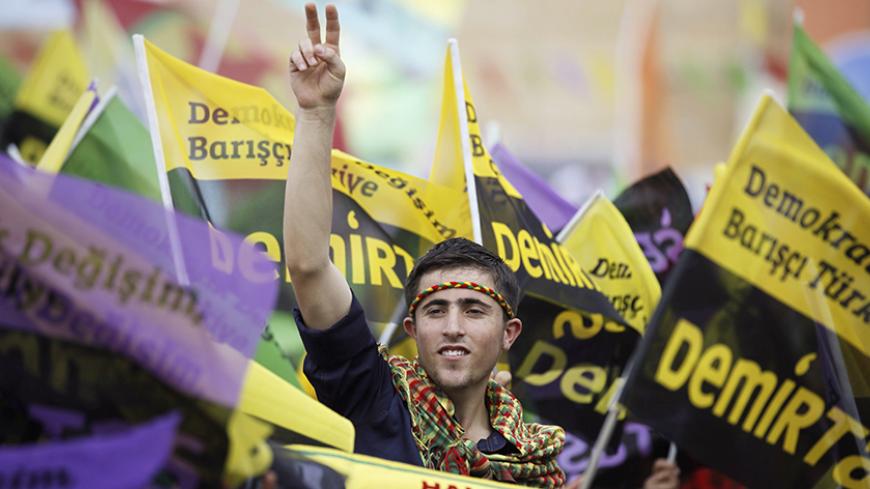 In a normal democracy, it would be unthinkable for a political party with a projected vote count of some 9% to be left out of parliament. In Turkey, however, it is possible, because the country’s parliamentary electoral threshold, the world’s highest, stands at 10%. The latest debate sparked by the threshold involves the Kurdish-dominated People’s Democracy Party (HDP) and its chances of entering parliament in the June 7 general elections.

Turkey’s Kurdish parties have never managed to reach the 10% mark, but they won parliamentary representation at the polls in 2007 and 2011, when the parties won seats by fielding independents, a method that allowed them to get around the threshold requirement. In 2011, the Peace and Democracy Party, from which the HDP branched off, garnered only 6% of the vote but managed to get 36 candidates into parliament. In 2007, its predecessor, the Democratic Society Party, used the same method to clinch 20 seats, while receiving about 4% of the vote.

The HDP now faces a dilemma stemming from its critical decision to contest the next elections as a party. Running as a party seems to be a final decision, which makes overcoming the 10% barrier a make-or-break situation. Failure to do so would mean that not even a single deputy would represent the Kurdish political movement in parliament.

With 4½ months to go until the elections, various pollsters have estimated the HDP’s vote at about 9%, which shrouds the party’s prospects in uncertainty. Being sidelined from politics might seem like too big a risk for the Kurds to take. The HDP, however, is not the only embodiment of the Kurdish political movement, and parliament is not its only platform for political engagement in Turkey. Moreover, an HDP left outside parliament poses greater risks for Turkey than it does for the Kurdish political movement.

Under the worst-case scenario, the HDP’s failure to surpass the national threshold will mean that all the seats it wins in Kurdish-majority constituencies would go to the ruling Justice and Development Party (AKP), its sole rival in those areas. This, in turn, would help the AKP clinch 330 seats in the 550-member parliament, giving it the majority it needs to unilaterally rewrite the constitution in line with President Recep Tayyip Erdogan’s ambition of an authoritarian presidential system and then submit the draft to a referendum. Popular approval of such a constitution would put the last brick in the wall of the authoritarian Islamist regime under construction in Turkey, raising the specter of political, economic and social upheavals that would deal an inevitable blow to the legitimacy of the country’s political system.

Such dramatic developments could also invite non-democratic interventions in Turkish politics. This could then prompt the Kurds to raise secessionist demands, which the international community is likely to see as legitimate and support them.

Certainly, the prospect of civil strife and instability in Turkey is not pre-conditioned on the AKP winning at least 330 parliamentary seats in the next elections. The government’s growing authoritarianism could lead to similar upheavals regardless. Yet, an AKP wielding more than 330 seats is likely to drastically accelerate the descent into turmoil.

Speculation is already rife in the Turkish media that regardless of whether a new constitution is drafted, an HDP left outside parliament will overshadow the election’s legitimacy and push the Kurds into going their own way — just as their Syrian cousins did with their autonomous cantons —and plunge Turkey into chaos.

HDP co-chair Selahattin Demirtas is confident, however, that the party will pass the vote threshold and believes that a doomsday scenario is not at hand. “We don’t think that any chaos will ensue if we fail to pass the threshold. In such a case, however, we’ll do our best to push early elections and have the threshold lowered. We’ll press for that on legitimate democratic grounds,” Demirtas told a group of journalists Jan. 18. He also asserted that the AKP would lack the political legitimacy and strength to unilaterally rewrite the constitution, even if it clinches more than 330 parliamentary seats in the case the HDP falls below the threshold.

Those who argue the HDP cannot reach 10% point to the 6.6% of the vote that candidates of the Kurdish political movement garnered in the March 2014 municipal elections. They maintain that the difference between that figure and the 9.8% of votes Demirtas mustered alone in the August presidential elections stemmed from “borrowed” votes. That is, the charismatic Kurdish politician led an individual campaign whose pluralist, leftist agenda appealed to voters across Turkey, beyond his Kurdish base. Many observers expect that those voters will return to their own parties in the June 7 elections.

The HDP leader remains optimistic that he will largely retain his presidential votes, his confidence boosted by current opinion polls, which he shared with Al-Monitor on the condition the pollsters remain anonymous. Two credible surveys conducted the last week of December and the second week of January, which Al-Monitor confirmed with the pollsters, put the HDP’s vote at 9.6%, with a margin of error of 1.5%. The surveys, Demirtas stressed, have also found that the number of voters determined to “never vote for a Kurdish party” has declined from more than 70% to 56%.

Overcoming the vote threshold would bring the HDP significant parliamentary clout and eliminate the prospect of the AKP unilaterally rewriting the constitution. “If we pass the 10% threshold, we expect to get more than 70 seats,” Demirtas said. “We managed to reach out to a significant number of voters in the presidential polls, and that was just a beginning. We are striving to organize the opposition in society, to unite opposition forces — from Alevis and Jafaris [Shiites] to non-Muslim minorities. We’ll field candidates with very diverse ethnic, sectarian and gender profiles.”

Adil Gur, head of the respected A&G polling company, said the HDP’s success in overcoming the threshold will depend on a number of factors. Here is how he assessed the party’s prospects:

The (peace) settlement process has led to a voter migration from the AKP’s Kurdish base to the HDP. The HDP will have no problem in passing the threshold if it employs Demirtas’ rhetoric from the presidential polls — inclusive and embracing all of Turkey — and backs it up with appropriate candidates. The party has to distance itself from (the military command of the Kurdistan Workers Party in) the Kandil Mountains and street unrest. At a time when opposition to the AKP is on the rise, voters might gravitate to the HDP in a bid to stop a single-party government from acquiring the power to unilaterally change the constitution. The HDP’s success in passing the threshold will depend on two major factors. The first is the course of the peace process and street unrest. The (Kurdish movement’s) street activities causes hesitation among voters sympathetic to Demirtas. The second factor will be the attitude of the main opposition Republican People’s Party (CHP). If the CHP moves away from the left in a bid to attract conservative voters, the HDP could fill the void it leaves behind.

In short, if the HDP fails to reach the vote threshold, the Kurdish movement gets a shot at making long-term gains at the expense of Turkish democracy, and if it succeeds, it makes immediate gains, complete with a strong bargaining position. That is a win-win situation.