Kurds in Turkey will have the final say in Prime Minister Recep Tayyip Erdogan's bid for the presidency. 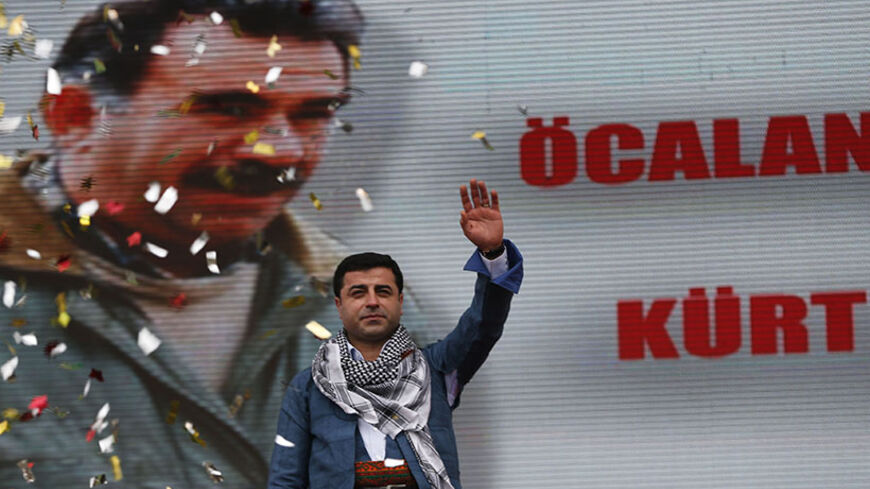 A day before the Justice and Development Party (AKP) revealed its presidential candidate, the People's Democracy Party (HDP) announced as its presidential candidate, Selahattin Demirtas. Demirtas could well be a more formidable challenge to Prime Minister Recep Tayyip Erdogan than the joint candidate named by the two main opposition parties — the Republican People's Party (CHP) and Nationalist Action Party (MHP) — Ekmeleddin Ihsanoglu, who until recently had occupied the highest post of the Islamic Cooperation Organization (the former Islamic Conference Organization). Ihsanoglu, a professor, was nominated to attract votes from Erdogan’s ostensibly invincible constituency. Yet, Kurdish contender Demirtas may rise as the real challenge.

For the second time in a decade, a Kurdish presidential candidate has emerged in a country where the majority of the population is not Kurdish. Jalal Talabani, one of the most prominent figures in Kurdish political history, was elected as president of Iraq in 2006 and 2010. This cemented Iraq's territorial integrity and kept the Kurds within the state of Iraq, although Iraq constitutionally changed to a federal country with the Kurds enjoying self-rule through the Kurdistan Regional Government.

While in Iraq a Kurdish president had been the outcome of a compromise among the three major components of the country — Shiites, Sunnis and Kurds — the speaker of parliament was a Sunni Arab, while the prime ministry was allocated to a Shiite Arab. The presidency was accorded not only to the Kurds but specifically to Talabani as the veteran political personality of the region to hold the conflicting Iraqi protagonists together, while providing a central safeguard for the federal Kurdish entity in the north of the country. Moreover, the president of Iraq was elected by the parliamentary vote over and above the consensus and the compromise reached.

Turkey’s case is different, as no such procedure exists in Turkey. The president will be elected by popular vote, and it is almost impossible that a Kurdish nationalist figure, even as popular as Demirtas, is elevated to that post by the ballot box.

Nevertheless, it's a strong indicator that the historical epoch reached with the Kurds plays an ever increasing prominent role in the Middle East.

The true motive for Demirtas entering into the presidential contest is for the Kurdish movement to flex its muscles in Turkey at a time when the Iraqi unitary state is collapsing and the Kurds appear to be making significant progress. Kurds will place all their energy in getting as many votes they can for their candidate, who's a young, popular politician in Turkey’s political arena. This may cost Erdogan a win in the first round of the presidential elections scheduled for Aug. 10.

To get elected in the first round, 50% or more of the votes is required. The March 30 local elections that are considered a remarkable success for Erdogan resulted in over 43% for him and the AKP. Thus, the remaining 6-7% required for his presidential bid necessitates the Kurdish electoral support. This percentage is the average number of votes the pro-Kurdistan Workers Party (PKK) constituency provides, and is roughly the average received by the pro-Kurdish Peace and Democracy Party (BDP), which enjoyed the electoral support of PKK sympathizers.

According to instructions by imprisoned PKK leader Abdullah Ocalan, the HDP that was recently established as the umbrella organization of the Kurdish movement and Turkey’s left will inherit the BDP votes. If the HDP can mobilize its 6-7% or more votes for Demirtas, he will not only prevent Erdogan from winning the presidency in the first round of voting but will also enable the Kurds to sit down for serious bargaining with Erdogan in the second round.

One of Demirtas' interesting characteristics was to stand out as one of few Kurdish politicians who did not refrain from strongly criticizing Erdogan, whereas many other Kurdish politicians adhered to a reconciliatory attitude to Erdogan’s government so as not to endanger the fragile peace process that started in 2013.

The distancing of Kurds from the 2013 Taksim Square and Gezi Park protests did not go unnoticed. Even more important was Ocalan joining Erdogan in labeling the graft probe of Dec. 17, which resulted in resignations of four government ministers and that had become the most threatening development of Erdogan’s political career, as “a coup attempt." Taking their cue from Ocalan’s attitude, the PKK and its sympathizers have refrained from rhetoric that could weaken Erdogan and imperil the peace process he was handling.

Meanwhile, Kurdish leadership cadres led by Cemil Bayik at the PKK headquarters in the Kandil Mountains, which also handles the daily administration of its political establishment, continued to use strong language against Erdogan and his government.

This divergence in approaches, although denied by the PKK, had led to assessments that there were differences between Ocalan and the PKK. This divergence was also reflected by the Kurdish attitudes of politicians active in legal political activities.

Demirtas, within this context, seemed to belong to those confrontational elements of the Kurdish political movement vis-a-vis Erdogan. Demirtas being the choice to run against Erdogan, which may cost the latter not being elected in the first round of presidential elections, deserves attention.

Two days before Demirtas’ nomination was announced, Bayik, who is considered to be the most influential name of the PKK, had said the presidential race will be between the AKP and HDP, hereby completely ignoring Ihsanoglu.

The announcement of Demirtas as the HDP candidate a short time before Bayik’s remarks even led to speculations that if Erdogan is not elected in the first round and Demirtas cannot make it to the second round, the Kurds will boycott the second round of voting.

This unusual speculation that followed the prediction of Ocalan giving the green light for Erdogan’s election is offering clues that Turkey should well expect surprising developments in the near future.

The most firm conclusion until now is that the Turkish Kurds are determined to raise the bar higher to benefit from risks and opportunities now offered to them concomitant with developments in Iraq.

A presidential win for Erdogan will only happen with support from the Kurds; an unsuccessful presidental bid by Erdogan will be because of the Kurds also.