The deeper lesson from the Erdogan-Gulen war is that even "good Muslims" do not fare well when dominating an authoritarian state. 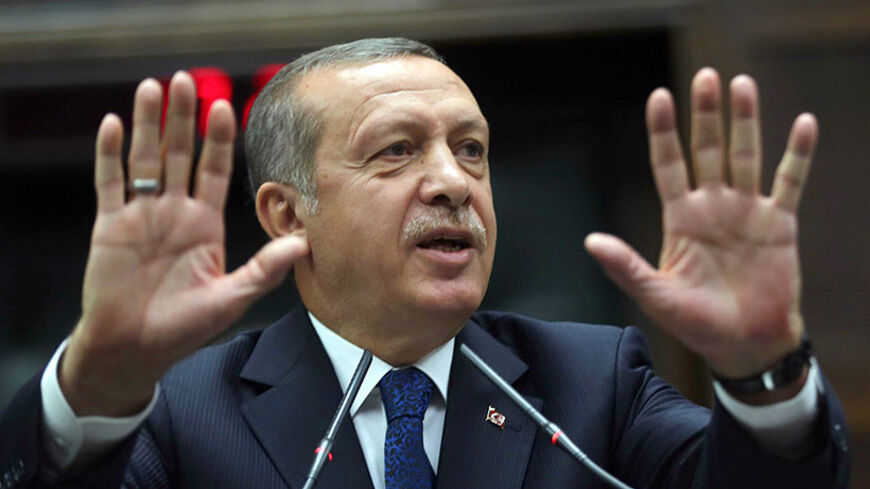 “If this is called a witch hunt, then yes, we perform a witch hunt,” said Turkish Prime Minister Recep Tayyip Erdogan at a May 10 “consultation and assessment meeting” of his Justice and Development Party (AKP). He was referring to the purge and reshuffling within the Turkish judiciary and police with the clear aim of dismantling the “parallel state” allegedly formed by the Fethullah Gulen movement. “In order to sterilize this dirty water that contaminated the milk, we will either boil or molecularize it,” Erdogan added, using a biological reference to justify an operation on state and society.

Students of political history will probably note that these are not healthy signs for any country, and Erdogan’s self-acknowledged “witch hunt” deserves a closer look. It also begs revisiting popular political concepts within Islam, because both the Erdogan government and the Gulen movement are self-declared Islamic actors.

Let’s begin with the question of what's driving Erdogan to conduct this witch hunt: He felt targeted by the “parallel state” accused of having a conspiratorial hierarchy and purpose, similar to what Freemasons have sometimes been accused of in European history. (One must grant that many independent journalists have also claimed that the Gulen movement, indeed, has too many members in Turkey's key institutions, forming a formidable partisan force.) The irony here is that until a few years ago, Erdogan saw his current nemesis as not a threat but an asset because back then, both Erdogan’s AKP and the Gulen movement had a common enemy. Turkey’s secularist establishment, particularly the military, was a threat to all religious conservatives. But once the common enemy was defeated, the two sides began to disagree, and ultimately fight. The corruption investigation opened against Erdogan’s inner circle in December and the subsequent release of scandalous recordings of wiretapped conversations is widely seen in Turkey as a part of this AKP-Gulen war.

However, with the AKP's electoral victories on March 30, Erdogan seems to have gained the upper hand. Now he is willing to destroy the threat for good by exposing and purging the “parallel state.” Thus the pro-Erdogan media is busy revealing the enemy's wrongdoings, which include excessive arrests and other abuses during the legal cases opened between 2007-2011 over alleged military coup attempts. The same “parallel state” is also accused of wiretapping thousands of prominent figures, with bogus claims of membership in mythical terrorist organizations. (For example, see the recent piece by Ibrahim Karagul, the editor-in-chief of Yeni Safak, explaining how he was subjected to surveillance and even framing for major crimes.) These are serious claims that need to be heard in court.

However, even if we accept all these allegations about the “parallel state” at face value, they mean that certain members of the Gulen movement, particularly within the police and judiciary, have abused their power and thus should face justice. But does this mean that every single person who is known or even suspected to be a member of the movement should be treated as a criminal?

That is the point where Erdogan’s attack on the “parallel state” becomes a witch hunt. As newspapers report, there is an ongoing purge within the whole bureaucracy, including state-owned banks and companies, against anyone suspected of being a member of the Gulen movement. For example, as Radikal reported, even within Turkish Airlines, a booming state company, some 40 people in senior positions have recently been fired or demoted under suspicion of being Gulenists.

The impact of this purge on its targets is understandably tragic. As Zaman reported, Emirhan Niyazi Pacaci, a 26-year-old police officer, committed suicide after being demoted and demonized as a “communalist” — a term implying membership in the Gulen Community. I have also personally witnessed that students of Gulen-affiliated schools feel hopeless about their future, fearing that the “communalist” stamp in their files will render them jobless.

Even more worrying is that mere opposition to Erdogan, or even silence about his “war of liberation,” can be perceived these days by some of his zealous followers as evidence of Gulenism. Even Akif Beki, who was once Erdogan’s press adviser and is still often a strong supporter of his policies, recently complained of that paranoia in his column in Hurriyet. “Some pro-government propagandists have appeared who brand even the former Justice Minister Sadullah Ergin as ‘parallel,'” Beki wrote, underlying that even he, who routinely emphasizes the threat of the “parallel state,” finds this to be too much.

The problem is that once Erdogan designated a particular group as the “enemy within,” his fervent fans began competing with each other to demonize the enemy, possibly with the hope of receiving the blessing of the commander-in-chief. The media editors and commentators who excelled in this battle by producing the most provocative headlines, breaking news or opinion columns got promoted, creating an example for the rest to follow.

At this moment, how far this witch hunt will go and where will it end are questions without answers. But it is already clear that this intra-Islamic hate-fest should force Turkey’s conservative Muslims to rethink some of their long-held convictions about politics.

One such conviction was that Turkey’s problems were caused by the hegemony of the secularist elite, the Kemalists. When these “oppressors” would be overthrown by “democracy,” the conservatives hoped, Turkey would become heaven on earth. “Good Muslims” would dominate the state and initiate an era of justice reminiscent of the legendary age of Caliph Umar.

What happened instead is that “good Muslims” indeed came to power, but they have proven to be guilty of every single type of misconduct that their secular predecessors were blamed for — nepotism, partisanship, corruption, arrogance and authoritarianism. Moreover, the state power they grabbed initiated a bitter power struggle between them, leading to the current witch hunt.

Hopefully, when all the zeal and brouhaha finally settle, a lesson will be taken from all this: What really matters is not who dominates the state — “bad secularists,” “good Muslims” or any other camp in society. What really matters is whether the state is limited, transparent, accountable and fair. If the state is rather a Leviathan, as it has always been in Turkey, then the “good Muslims” who dominate it do no good to anyone, including themselves.