Former police Chief Hanefi Avci, among the first to expose Turkey’s “parallel state” and one of its high-profile victims, retains a realistic and cool-headed attitude on the issue, unlike some pro-government propagandists. 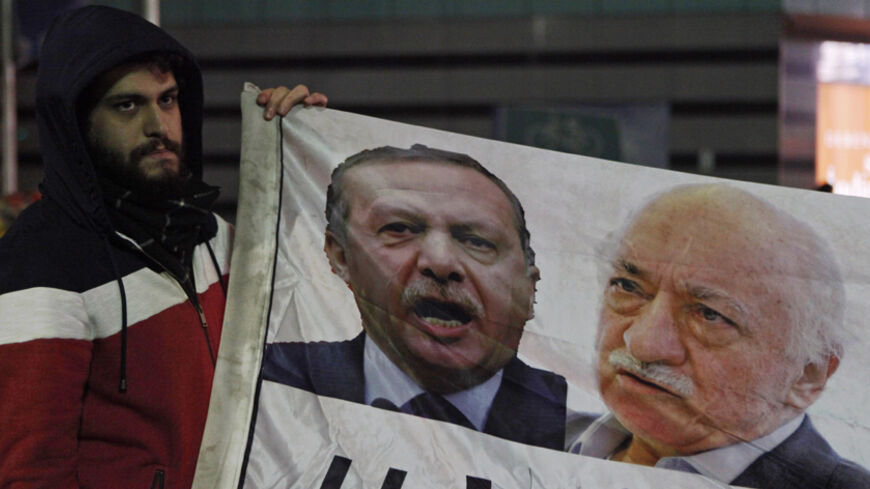 Turkey’s acquaintance with Hanefi Avci dates back to the so-called Feb. 28 Process in the late 1990s when he emerged as a brave police chief standing up to the secularist putchists and exposing their violations on the TV screen. Years later, in 2010, he was back in the headlines with a book claiming that the repressive state machine, controlled by secularist generals in the past, was now the tool of the Fethullah Gulen community. Gulenist police, he wrote, had taken control of police intelligence, purging rival colleagues along the way, and were now using their power to lay traps for political rivals.

After reading his book, it was obvious to me that Avci was not one of those hard-core secularists averse to the Gulen community because of its religious values. The concrete incidents he recounted and the sociological analyses he made on closed, tight-knit ideological communities sounded convincing to me. I became even more convinced when Avci was soon put behind bars by the same police and prosecutors he accused in the book. He was indicted for membership in an obscure Communist organization, a charge that was not only thin but actually backed up Avci’s charges that Gulenist police made things up to carry out political arrests.

Following Avci’s arrest I wrote a number of articles in his defense, which led some colleagues, who advocated a relentless onslaught on the “putchists,” to chastise me, including in a column titled “What are you doing Mustafa?”

Then, in a couple of years the atmosphere in Turkey changed. The ruling Justice and Development Party (AKP) and the Gulen community fell out, and Avci’s claims became the No. 1 topic in the pro-government media. The new political climate resulted in a sound Constitutional Court ruling that led to Avci’s release from jail in June.

Last week, I met with him in a cafe in Istanbul. I saw that his stance on the “parallel state” is more objective, prudent and realistic than the vengeful writers in pro-government circles.

I asked Avci first about how he ended up in jail. He explained that an underground Communist group by the name Revolutionary Headquarters did exist, but that he was implicated by an extremely strained link. This method, after all, was the hallmark of the “parallel structure”: drawing far-fetched associations between targeted individuals and existing criminal groups and, if need be, fabricating evidence.

But what was the underlying logic?

When I asked him what all this had to do with Islam, Avci said, “In fact, this mentality has nothing to do with religion directly. All illegal ideological organizations have the same mentality. The world is split into black and white according to the group’s ideology, and wrongdoings in the name of a grand ideal become increasingly legitimate over time.”

And what if the actions of the “parallel state” are not the result of closed-group-idealism-turned-fanaticism but of serving the interests of “foreign powers”? What if the United States or Israel is behind all this? I knew Avci did not embrace this conspiracy theory, a fixture in the pro-government media, for he had lately shared the following post on Twitter: “The crimes of the parallel structure are obvious: forging documents, setting up individuals and institutions … Arguments that go beyond this are mere speculation.”

He stuck to his position during our conversation, stressing there was no evidence to back up government claims of “espionage on behalf of foreign powers.”

He further said, “Given that Fethullah Gulen is based in the United States, reliant on it, and that the community has some important activities there, it is understandable that they use a rhetoric sympathetic to the United States and Israel. But this doesn’t mean that the community supplies information to the United States and Israel or that it works for them. Based on existing evidence, one could say that the community obtained and exploited secret state documents — and those are very grave accusations — but there is no evidence to suggest they passed those documents to another country. Espionage means obtaining secret information with the purpose of passing it to a foreign country. In fact, I believe the community members’ view of foreign powers and the outside world is no different from the view of the average Anatolian person.”

Next, I asked Avci about the Dec. 17 and Dec. 25 corruption probes. His comments suggested he didn’t downplay the evidence the probes had produced. Yet, he stressed the investigations were politically motivated, aiming to box the government in and even bring it down.

Another critical topic I brought up was how almost all crimes the pro-government media used to blame the “deep state” — in collaboration with pro-Gulen media — were now blamed on the “parallel state” by the same media.

“How do you view the fact that crimes previously attributed to the Ergenekon network and the ‘deep state’ — like Hrant Dink’s assassination, the missionaries’ massacre in Malatya in 2006 and the bombing of a bookstore in Semdinli in 2005 — are now attributed to the ‘parallel state’?” I asked.

Starting with an overview of the past, Avci offered the following explanation: “The Gulen community tried to use every bad incident in Turkey’s recent history as a cover for operations against certain quarters, regardless of whether evidence existed or not. The death of [former President] Turgut Ozal, [politician] Muhsin Yazicioglu’s death in a helicopter crash, Hrant Dink’s murder, the massacre of the missionaries in Malatya are some of the examples. To implicate the quarters it targeted, the community distorted the facts and even impeded efforts to solve those cases. Had it not acted in such a subjective and conspiratorial manner, had it not manipulated and exploited those cases, they could have been analyzed and solved.”

Avci, however, was equally opposed to the use of the same conspiratorial mentality and prejudices against the community today.

He said, “The community exaggerated its propaganda so much that some journalists came to believe that those murders were committed or masterminded by community members.”

Then he added, “I think that blaming those incidents on the Gulen community without any tangible evidence and investigation is as wrong as the probes that Gulenist police and prosecutors led without any evidence and real investigation and the propaganda campaigns the community waged to implicate certain quarters. I believe those cases can be solved with an objective investigation. Some of them will be confirmed as accidents (such as Yazicioglu’s case) and others as natural deaths (such as Ozal’s).”

No to witch hunts

And how should the state counter this “parallel structure”? I reminded Avci that a witch hunt is underway, with the government seeking to undermine all entities and institutions of the Gulen community. Is it OK to target schools, private tutoring halls, charities or Bank Asya?

He further said, “Targeting the community’s civic entities cannot be justified as long as they have not been involved in a crime, collaborated with a criminal formation or facilitated a criminal activity. The state should not engage in political rows.”

In Avci’s view, what needs to be done is simple: uncover and probe the wrongdoings of the “parallel structure” through legal means. This includes exposing and prosecuting the injustices in the Ergenekon and Sledgehammer coup probes, the illegal wiretapping, the seizure of secret state documents, the fabrication of evidence, the unlawful purges in the police and the nepotistic entrenchment in the bureaucracy. “The exposure of all those misconducts, I believe, will lead also to soul-searching within the community itself,” he added.

Avci seemed upset that the community had come to this point. “I wish they never gotten involved in those affairs and instead carried on with their schools and charities. They would have set an example both in Turkey and in the world,” he said.

Those feelings are not surprising for someone who identifies himself as a conservative, shares common values with the Gulen community and appreciates its educational institutions.

I said goodbye to Avci, filled with similar feelings. The Gulen community, I thought, should have never succumbed to ambitions to entrench itself in the bureaucracy and all those power struggles. I wish we still knew it only as the devoted teachers trotting the globe from Kenya to Mongolia to open schools, the gentle “dialogue” volunteers, the faith services and charities. Had its leaders not yearned for power this much, they would not have become so vulnerable to its corrupting effect.

Yet, one should keep in mind that the “power corrupts” rule is valid for everyone, including the AKP government, which has turned from the Gulen community’s best partner to its archenemy. It's also time for the AKP to face up to its obvious corruption, and elevate its take on the Gulen community from the primitive level of political revenge and witch hunt to the level of justice. One of the safest ways to do this is perhaps to lend an ear to Avci, a man who has kept an honest stance on the issue from the beginning.