Turkey to close down police academies

The Erdogan government has decided to close down Turkey’s police academies, which, it believes, have become the main stronghold of Gulenists. 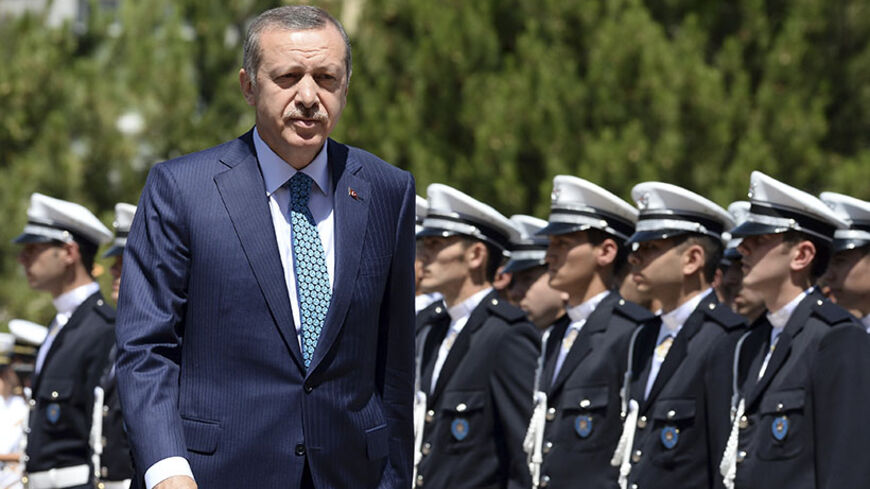 Turkey's Prime Minister Recep Tayyip Erdogan reviews students of the Police Academy upon his arrival at their graduation ceremony in Ankara, June 24, 2013. - REUTERS

The Turkish government last week made a decision to perform an administrative reform of revolutionary proportions: closing the country’s police academies and training schools, which have become the stronghold of Gulenists.

Under the plan, which comes as part of efforts to purge Gulenists entrenched in the state, Turkey’s security establishment will undergo a fundamental overhaul. The Police Academy’s Security Units Institute, which trains senior police cadres, is to be shut down and replaced with a Police Commanders Training Center. The Police Academy itself will be completely dismantled over time. The plan will also affect police vocational colleges, which are to be transformed to police vocational training centers. The Sabah newspaper reported the plan as “closing down the dens of malice.”

The reform package, outlined after a review of practices in 10 European Union countries, was to be adopted before the end of the current legislative year. Prime Minister Recep Tayyip Erdogan has issued instructions that the overhaul be put into practice as soon as possible.

In comments to Al-Monitor, a source close to Erdogan provided details on a blueprint submitted to the prime minister. The document envisages three stages in changing the process that shapes the careers of police officers and commanders, the source said. The most important leg involves a fundamental overhaul of police academies. The report describes the Security Units Faculty, the prime training center for police commanders, as a key institution. The faculty has long been the main target of Gulenists and other groups seeking to entrench themselves in the police. According to the proposed changes, the Security Units Faculty, which trains police commanders on a four-year boarding program, would be replaced with a Police Commanders Training Center with a one-year academic program.

The overhaul will also change the training of ordinary police officers. The police vocational colleges, the main institutions training those officers, have also had a crucial role in the Gulenist entrenchment in the police. Under the plan, the colleges, which currently offer two-year boarding programs, would be replaced with police vocational training centers offering six-month professional training.

Finally, the third leg aims to dismantle the Gulenist academic cadres in the police academies, who, according to the report submitted to Erdogan, have come to occupy 90% of all teaching positions. The Gulenist academics are to be transferred to the pool of the Higher Education Board (YOK), the body regulating Turkish universities. Those academics are considered to be primarily responsible for Gulenist predominance in senior police offices. They have virtually shaped the police establishment, drawing on their key role in the students’ admission to and graduation from the academies. Once under the YOK roof, they will be reappointed to fledgling universities with staff shortages.

The report submitted to Erdogan contains harsh criticism of how police are currently developed, stressing that the process is shaped by rigid bureaucratic practices and a tutelage mentality. It says that boarding education, isolated from the public and society, has long played into the hands of groups like the Gulenist parallel structure that seeks tutelage over civilian politics.

It is interesting to see that even opponents of the ruling Justice and Development Party (AKP) have not raised objections to the planned closure of the police academies. None of the three opposition parties in parliament have spoken against the plan. For years, they have all argued that the Gulenists control the police establishment, fabricate evidence in major investigations and trample on the basic norms of the rule of law. Thus, they are now trying to avoid contradicting themselves.

Saygi Ozturk, a hard-line secularist journalist with the largest-selling anti-AKP daily Sozcu and an author of books on the Gulenists, wrote: “With all police schools under the control of the [Gulen] community, the AKP found no other solution but to halt the admission of students to those schools. Initially, the police schools in Ankara and Bursa will be shut down. The police colleges, run by the General Directorate of Security, are the places where would-be police commanders are raised. Official state reports, however, have long pointed out that those colleges have come under the full control of the [Gulen] community and that the students are trained not only at school but also in [Gulenist] 'light houses' on the weekends. Having failed to break the community’s clout in the schools, the government has now decided to halt the admission of new students. The colleges will be closed down after the incumbent students graduate. … Officials from the General Directorate of Security contend that 'the colleges have completed their mission, leading to the decision to halt admissions,' but the conflict between the government and the community is the sole reason that prompted the decision.”

A popular police chief, Hanefi Avci, was the first person to speak out — in a book published in 2010 — on how Gulenists fully controlled the police and the judiciary and fabricated evidence to lock up Gulen critics. As soon as the book was released, the Gulenist media began a fierce attack on Avci. The AKP government, too, disowned Avci, removing him from the post of Eskisehir police chief. The AKP-Gulenist alliance, driven by the common goal of undoing the Turkish military’s political clout, was still intact at the time. Abandoned by the government, Avci opted to retire. Soon, Gulenists put him behind bars on charges of membership in an obscure Marxist-Leninist terrorist group.

The charges were not only a fabrication but a ludicrous one, since Avci was well-known to be rightist leaning. Pro-AKP observers joined the outcry over Avci’s arrest, with only the Gulenists defending it. Yet, the absurd court case proceeded and the rightist Avci was sentenced to 15 years for belonging to a Communist terror group. He remains in prison.

Following the Avci affair, two journalists who focused on the Gulenist entrenchment in the police ended up in prison, again on trumped-up charges.

One of them, the leftist Ahmet Sik, was writing a book — "The Imam’s Army" — which documented how Gulenists got organized in the police and the judiciary. Before the book was even published, Sik landed behind bars, while Gulenist police secured a confiscation order for copies of drafts of the book. Even the Radikal daily was raided on grounds it had one of the drafts.

Similarly, Nedim Sener’s life turned to hell after he published a book on how Gulenist police sought to cover up the murder of Turkish-Armenian journalist Hrant Dink. Sener argued the security forces had obtained intelligence of a plot to kill Dink, but Gulenist police chiefs swept the tip-off under the carpet and let the murder go ahead so they could use it as grounds to start the Ergenekon coup investigation. Sener, too, ended up in prison.

The public was widely convinced that both Avci and the two journalists were the victim of Gulenist setups. The AKP holds a political responsibility for what happened. AKP officials kept silent at the time, even though the police chiefs who got Sener and Sik arrested were later removed from office on Erdogan’s orders. Erdogan himself made a terrible speech at the Council of Europe, claiming that some books could be as dangerous as bombs. But eventually, the Gulenist boomerang came to hit the AKP as well, climaxing in an attempt in December to arrest Erdogan’s associates.