Under government attack, Gulenist journalists are seeking support from colleagues whose imprisonment they once supported, warning that they could be next. 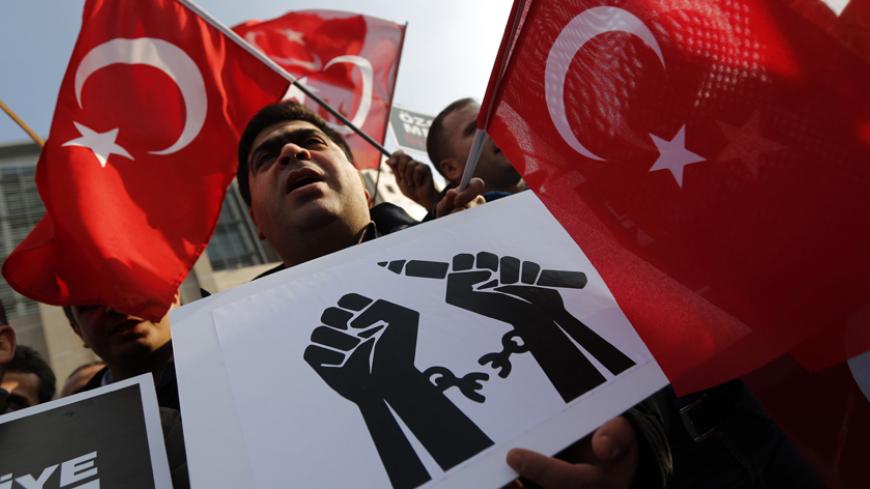 Supporters of the Gulen movement wave Turkish flags as they gather outside the Justice Palace in Istanbul, Dec. 19, 2014. - REUTERS/Murad Sezer

The latest judicial onslaught against journalists in Turkey has shone a spotlight on the deep rifts plaguing the country’s media and blighted efforts for a united defense of press freedom in the face of mounting threats.

Over the past several years, Turkey has earned itself the title of the world’s "worst jailer of journalists." During that time, journalists often became cheerleaders for the arrests that landed their colleagues behind bars. Those who found themselves in prison were typically pro-secular writers accused of colluding with the army in plots to overthrow the Justice and Development Party (AKP) government and discredit its then-ally, the influential community of the Muslim cleric Fethullah Gulen. Kurdish media workers accused of collaborating with Kurdish rebels were also targeted.

The tables have now turned. With the mainstream media largely muzzled, the government has set its sights on Gulenist outlets after the AKP fell out with Gulen last year over large-scale corruption probes, which, the government says, were a coup attempt orchestrated by Gulenist police and prosecutors.

On Dec. 14, police armed with arrest warrants arrived at media offices from which some of the loudest cheers had risen during past crackdowns. Taken in for questioning along with other media workers were Ekrem Dumanli, editor-in-chief of the Zaman daily, the Gulenist media’s flagship, and Hidayet Karaca, chief of Samanyolu TV (STV). They face terror-related charges over newspaper articles and a soap opera that allegedly led to the unfair imprisonment of an Islamist preacher whom Gulen considered a rival.

Turkey’s major press associations rallied behind their colleagues, and even some of Gulen’s die-hard adversaries decried what they saw as a fresh move to further bury the corruption probes.

“Press freedom and freedom of speech have ushered into an era of even worse repression. About 200 journalists have so far spent time in jail for membership in terrorist organizations, with the real reasons unclear and their right to a fair trial violated. We remind all journalists of the importance of solidarity,” said the Turkish Journalists Association and the Journalists’ Trade Union in a joint statement.

Kurdish journalists joined in condemning the arrests despite the Gulenist media’s “provocative and hateful role against the Kurdish press” in earlier years. “Past injustices cannot be remedied with new ones. We urge the government to end those non-democratic, repressive practices that we, too, experienced in the past,” said the Free Journalists Association in a statement from Diyarbakir, Turkey’s largest Kurdish city.

Heated debate raged on social media on how much support the Gulenist media deserved. Some were delighted that “what goes around comes around,” while others urged unity to defend press freedom against an increasingly intolerant government.

Gulenist and pro-government media, backed by secular liberals averse to the military, staunchly supported the controversial coup probes during 2007-11 that resulted not only in humbling the army, but also in stifling critical media. Many journalists justified the imprisonment of their colleagues, while others openly delighted in their arrests, threatened other peers with statements that they were next in line and vilified critics.

The coup trials have since been largely discredited. Many defendants had long claimed that Gulenist police had fabricated evidence to frame them. Prime Minister Recep Tayyip Erdogan lent an ear to those claims only after his government became the target of corruption investigations in December 2013. He then claimed that the Gulen community had “betrayed” and “deceived” him.

One journalist has stood out in his condemnation of recent events. In a tweet that stirred passions, Ahmet Sik, a vocal critic of Gulenist police who served a year in jail over an unpublished book, described the Gulen community as a “powerful keeper of the fascist era a few years ago,” but added, “What [they] face today is also called fascism. Standing up against fascism is a virtue.”

Zaman’s Washington representative, Ali Aslan, replied with a message of gratitude and remorse: “Thank you for calling the fascists ‘fascists’ Ahmet Sik. And please forgive. We failed to defend your freedom like this.”

The case that landed Sik in prison in 2011 was emblematic of how the coup probes devolved into a bullying campaign and reinforced suspicions that the police had fabricated evidence. Sik and 13 others, including prominent investigative journalist Nedim Sener and reporters from the Oda TV news site, were accused of being the “media arm” of the coup conspiracy.

Sik was about to publish a book arguing that Gulenists had taken control of key posts in the police and manipulated the coup investigations. In an unprecedented move, a court ordered the seizure of the book’s drafts and warned that those who refused to hand over copies would be deemed accomplices. Erdogan famously argued, “Some books could be more destructive than bombs.” The charges against the journalists were based on digital files found in an Oda TV computer that experts would later establish were planted via a virus.

In a poignant article, Sik, winner of UNESCO’s 2014 press freedom award, called for the defense of Gulenist journalists against injustice even though they had “criminalized their colleagues as ‘terrorists’ a few years ago and played a role in character assassinations.”

“The anti-terror courts are not the place to judge bad journalism or the abuse of journalism. … If we fail to stand up against this, we’ll be taking for granted the blows of silence, which is the most powerful weapon of totalitarian regimes,” he wrote.

Can Dundar, one of Turkey’s most popular columnists, issued a similar appeal. “Today is the day to stand by the victim and unite against Erdogan’s ‘stoppable’ ascent. … Today is the day to close ranks against the police state,” he wrote.

On Dec. 19, Dumanli was released, but banned from leaving Turkey. Karaca was remanded in custody on charges of "running a terrorist organization."

In an emotional TV appearance hours after his release, Dumanli admitted that his outfit “might have erred” in the past. He said Turkey’s history of military coups kept their journalists in the grips of fear, and he recalled how some media backed the army when it unseated Turkey’s first Islamist-led government in 1997. “Please, understand us. … Our worries might have caused us to err,” he said. “But that doesn’t stop me from saying today, ‘Buddy, you are next in line.’”

Zaman columnist Kerim Balci offered an apology. “Our sin, which is [now] similarly committed against us, was to fail to stand by Ahmet Sik​ and Nedim Sener. We apologize,” he wrote.

Erol Onderoglu, representative of Reporters Without Borders in Turkey, welcomed the stance of press associations and the conciliatory messages of Gulenist media, but worried that such gestures may be too little, too late. “Journalists should have developed dialogue and acted together … before anyone was threatened or regardless of who was threatened,” Onderoglu told Al-Monitor.

He underscored the “very damaging and flawed relationship” between media bosses and the government in Turkey, which “denies the media community an environment in which it could set its rules on its own.”

Onderoglu was referring to a chronic Turkish malaise: Media bosses have often been inclined to kowtow to the government, and keen to protect their interests in other, more lucrative business sectors. Under Erdogan, such stick-and-carrot pressures have resulted in widespread self-censorship and hundreds of media workers losing their jobs.

Onderoglu warned the prospects may be even gloomier. “I see two breaking points. First, [Turkey is] drifting away from the European Union. … Second, the polarization in society is likely to further radicalize,” he said. “Turkey risks becoming an enclosed country with a media even more vulnerable to threats and attacks.”